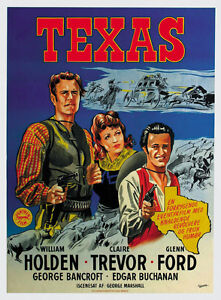 This is part of the Summer Under the Stars Blogathon sponsored by Journeys in Classic Film.  Thanks to Kristen Lopez for allowing me to participate.  Today's star is Claire Trevor.

It's fascinating to watch Texas and think, 'William Holden was once young'.  It sounds strange to say, but at least when I think of Holden, it's a slightly more weathered look he has, a jaded aura that haunts him in such films as Sunset Boulevard, The Bridge on the River Kwai, and Network.  As such, seeing an extremely youthful, almost contemporary Holden is one reason to watch Texas.  Glenn Ford (who incidentally is another Summer Under the Stars 2017 actor) is another.  Texas, sadly, is pretty much a B-Picture.  However, its these same three actors, along with a fourth performer, that makes Texas worth that hour-and-a-half running time.

Confederate veterans and BFFs Dan Thomas (Holden) and Tod Ramsey (Ford) find themselves in Abilene, Kansas just as the railroad opens. Thanks to the work of rail magnet Windy Miller (George Bancroft), they get out of jail and even do a little fisticuffs for little money (at Dan's insistence).  Leaving for Texas, they come across a group of bandits that has just robbed a stagecoach.  Opting to rob the robbers, Dan is for keeping the money and Tod is for returning it.

This leads to a parting of the ways, though they still are friends.  Making their getaway, Dan comes in brief contact with "Mike" King (Trevor), whom he tries to steal a horse from.  The feisty girl won't give in, even if she is a bit of a klutz, and while both Dan and Tod manage to escape, both find themselves in pickles.  Dan is hired by Matt Lashan (Addison Richards), a cattle baron who has a sideline as a cattle rustler, to be part of his gang.  Tod ends up working for the King family, which is also big on cattle.  Both are vouched for by the local dentist, Buford 'Doc' Thorpe (Edgar Buchanan), who behind his avuncular, slightly tottering manner is secretly playing both sides.

Some time passes, and Windy sweeps into Texas to try and get the cattle cheap.  It's not an easy sell, particularly since the bandits have been causing havoc with the cattle barons, down to killing Mike's father when he tries to get the other barons to join forces and transport the cattle en masse rather than by individual barons.  Dan comes to the Windy meeting and is instantly smitten by Mike.  Mike in turn falls for the roguish charms of Dan, either unaware or uninterested that his bestie Tod is also in love with Mike, but not able to tell her that.

Eventually, the various cattle barons do manage to get their cattle to Abilene (I figure from its sister city, Abilene, Texas), but Lashan is determined to make them pay dearly.  Dan, who is now the leader of the gang, is willing to go along with anything they come up with, so long as Tod is left untouched.  On that, he won't compromise.  Despite their word, Tod is shot, and Dan is both blamed for it and goes after the real killers.  It ends in a massive cattle stampede and shootout, and in the end Dan sacrifices himself for Tod, who is now free to be with Mike.

Perhaps I missed it, but I did wonder why Claire Trevor was named 'Mike'.  I figure it's short for 'Michelle', but I can't remember.  It does make Texas sound curious in that Dan and Tod both fall for Mike while making this love triangle.  I also could not see exactly why Mike would ignore Tod and be so enamored of Dan, apart from the fact that is was William Holden.

There is a good deal of comedy in Texas.  The extended fist fight in the beginning not only is played a bit for laughs but shows the stubbornness of Dan's character.  There's also a light moment at the shootout, when Dan walks across the room of the bathing Sheriff, apologizing for catching him at such a moment when all hell is breaking loose to the Sheriff's obliviousness.

Trevor too joins in on the fun and shows herself quite adept at physical comedy, even if like when she is practically held at gunpoint as she makes her daring escape, it comes a bit at her expense.

Trevor also shows how strict the Production Code was whenever she has to express deep frustration and anger whenever something happens to her.  If Texas is to be believed, her favorite swear word is literally 'blankety-blank'.  She uses that expression twice, at the daring escape from Dan and when she trips over a saddle left on her doorstep by Dan.

I think Trevor did better on the comedy than on the romance, but I put that up to the script than to her, since again I do puzzle as to why she would fall for Dan, apart from it being William Holden. 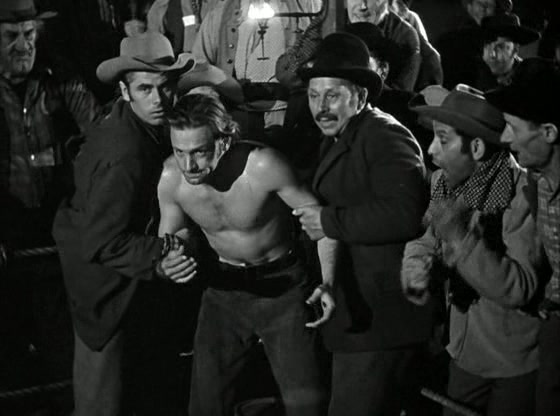 Holden, again, looks so young, and with his long hair at the beginning, he looks almost contemporary.  Texas isn't one of his greatest performances, but he shows promise in comedy, drama, and romance, all things that he would master as time went on.  Ford was more stoic as the less conflicted hero, but he is more than able to hold his own with Holden.

The best performance for my money is Buchanan as Doc.  He is more adept at the comedy, down to leading a singalong of Buffalo Gals long before It's A Wonderful Life made it world-famous (though in Texas, the lyrics are much different).  Most of the time he appears to be bumbling, a bit comically shady, and downright silly, forever pulling out the same 'bad tooth' even if its one he pulled out already.

Buchanan all but steals Texas, and for most of the time we forget that he is a villain.  That doesn't mean he isn't able to play the heavy, even in his seemingly bumbling way.  He keeps things light, but when needed he can be slightly menacing.

Texas is not a great film.  Sometimes you wonder why Mike would want to be with Dan, or that Dan too would not shrink from pursuing someone whom his lifelong friend is in love with, even if said friend can't say anything.   Essentially a B-Picture, Texas is lifted up by Holden, Ford, Trevor and Buchanan, who do great things with their roles.

I won't say Texas is worth seeking out, but it is entertaining, with some good pieces of action and comedy that make it a slight diversion for a quiet day.

Email ThisBlogThis!Share to TwitterShare to FacebookShare to Pinterest
Labels: Blogathon, Review, Summer Under the Stars, Westerns