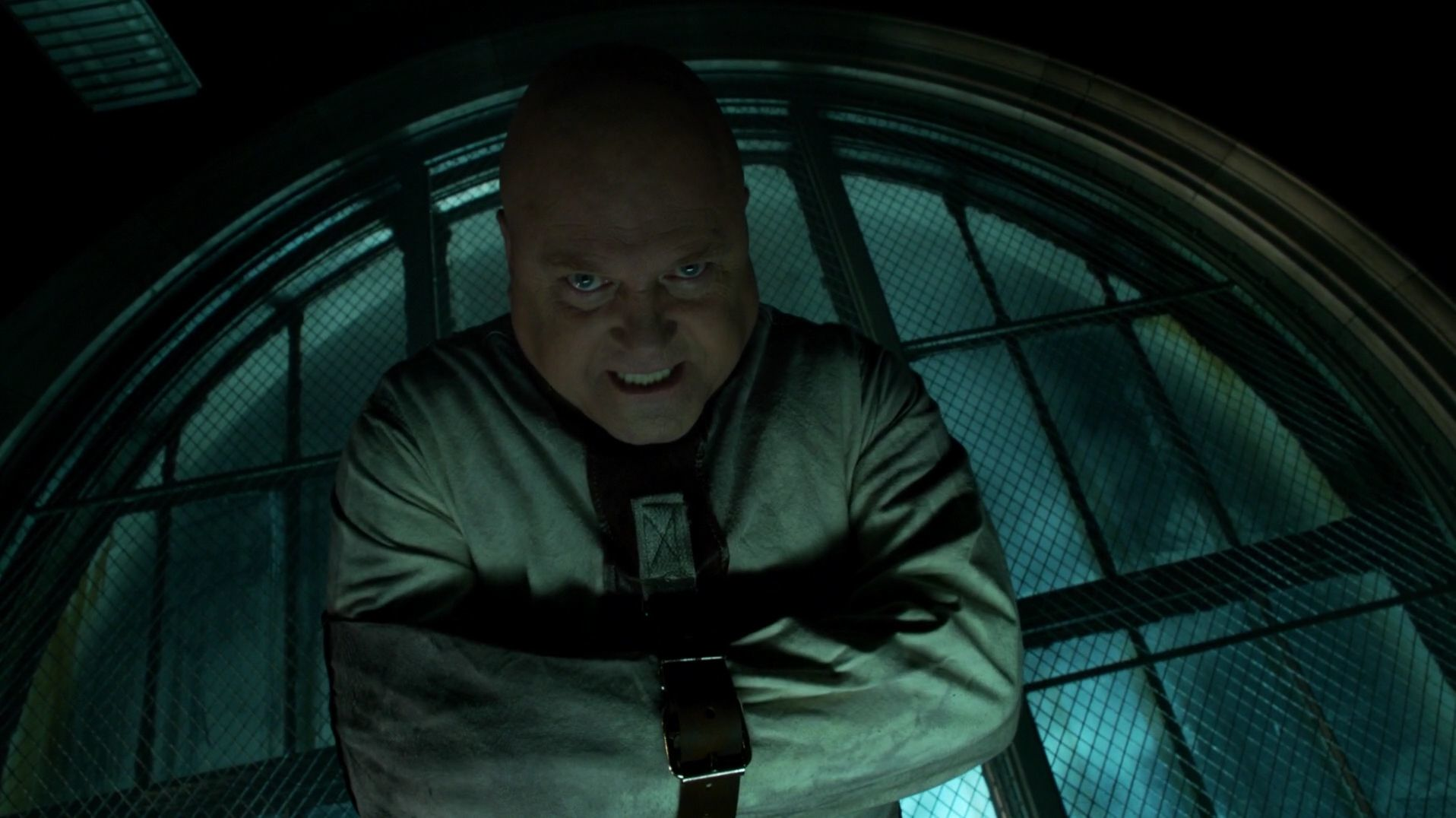 Well, here we go again.  The Executioner has more minuses than pluses, some almost hilarious lines and some very curious situations.

Captain Nathaniel Barnes (Michael Chiklis) has gone completely mad and is serving justice all over the place to those whom the law has been unable to capture.  If it means executing people without benefit of trial, so be it: absolute justice must be served.  Detective Jim Gordon (Ben McKenzie) knows Barnes has been infected with the Tetch virus and is not in control of his senses, but he can't let on.  Gordon's partner, Harvey Bullock (Donal Logue) doesn't believe that the by-the-book Barnes, who hasn't had an incident in his 20-year career, has suddenly gone bonkers.

He forgets, this is Gotham City.

Barnes, aware that Gordon is on to him, now is going to set him up for murder or maybe murder him himself.  Gordon, however, manages to convince Bullock just enough, with some help from Dr. Lee Thompkins (Morena Baccarin) to save him in time.

In the two other subplots, our dear Ivy Pepper, all grown up but still with the mindset of a child, steals a large emerald from a collector.  Bad move.  Even worse, Ivy (Maggie Geha) has finally revealed herself to her best friend, Selina Kyle (Camren Bicondova).  Selina calls in help from Bruce Wayne (David Mazouz), whom Ivy surmises is her boyfriend but whom Selina still refuses to recognize as such.  It isn't long before men are pursuing Ivy (and by extension, Selina and Bruce) for said emerald.  Bruce manages to buy it from Ivy for the maximum price of $5000 from its original $1000 (Ivy completely unaware that Bruce is a billionaire and as such, $5000, an outlandish price to Ivy, is pittance for him).  When they go to return it, they find the art collector dead, stabbed through the eye.

In anger, Selina tosses the emerald, only to find that a key emerges from it.

Our Bloodhound Gang will surely begin to investigate.

Finally, Edward Nygma (Cory Michael Smith) is still in deep mourning for his dead girlfriend, who for once he didn't kill.  His best friend, Mayor Oswald Cobblepot aka The Penguin (Robin Lord Taylor) does his best to get Nygma up and running, even by putting him in Mayor Cobblepot's official portrait.  Nygma, however, can't let go, and goes to place flowers where Isabella died.  There, Nygma gets the story from a homeless blind man that Isabella was screaming in terror as the train was coming down, contradicting the idea that she fell asleep and was killed.

A little investigating shows that her brakes were cut (and Nygma is both angry and astonished that no one on the GCPD noticed, leading him to suspect bribery along with foul play).  Nygma tells Pengy whom he holds responsible: Butch Gilzean, enacting revenge for unmasking him as the Red Hood Gang leader that caused havoc for Penguin.

The Executioner made me laugh more than it did make me excited.  I think it was a combination of a lot of things.

I howled in laughter when Bullock gives this unintentionally hilarious line to Gordon, "You got to tell Barnes what Symon said".  I'm genuinely surprised that Logue didn't burst out laughing as well when he read it or that he got through saying something like that and not laugh out loud himself.

While the subplot of Selina, Bruce and Ivy was nice (and Geha was good as the physically adult, mentally child Ivy), something about these kids forming some sort of investigative group to find what's behind the key strikes me as just a little off the beam.

I also wondered about something I think is a bit of an inconsistency when it comes to Captain Barnes.  In Blood Rush he was able to physically push someone through a wall, so when he and Gordon are having their ultimate battle I figure Captain Barnes would whip out his super-strength and be able to kill Gordon with his own hands.  Yet for some reason, Barnes' almost superhuman physical prowess didn't break through.

It isn't as if they were unevenly matched physically (both of them standing at 5'8"), though Chiklis at 54 is fifteen years McKenzie's senior. However, given what we've seen Barnes do, it seems highly curious that he in essence holds back from laying the smack down.

When it comes to the Nygma Investigates story (which by the way, I think would make a great show: Nygma Investigates) was anyone genuinely surprised that Nygma would finger the wrong person?  Was anyone similarly surprised that a wino would suddenly show up to give important information?   It seems a bit odd that Nygma hasn't picked up the gay vibe that Pengy throws, or the fact that Pengy has all but thrown himself at Nygma, which would put Cobblepot among the list of suspects. 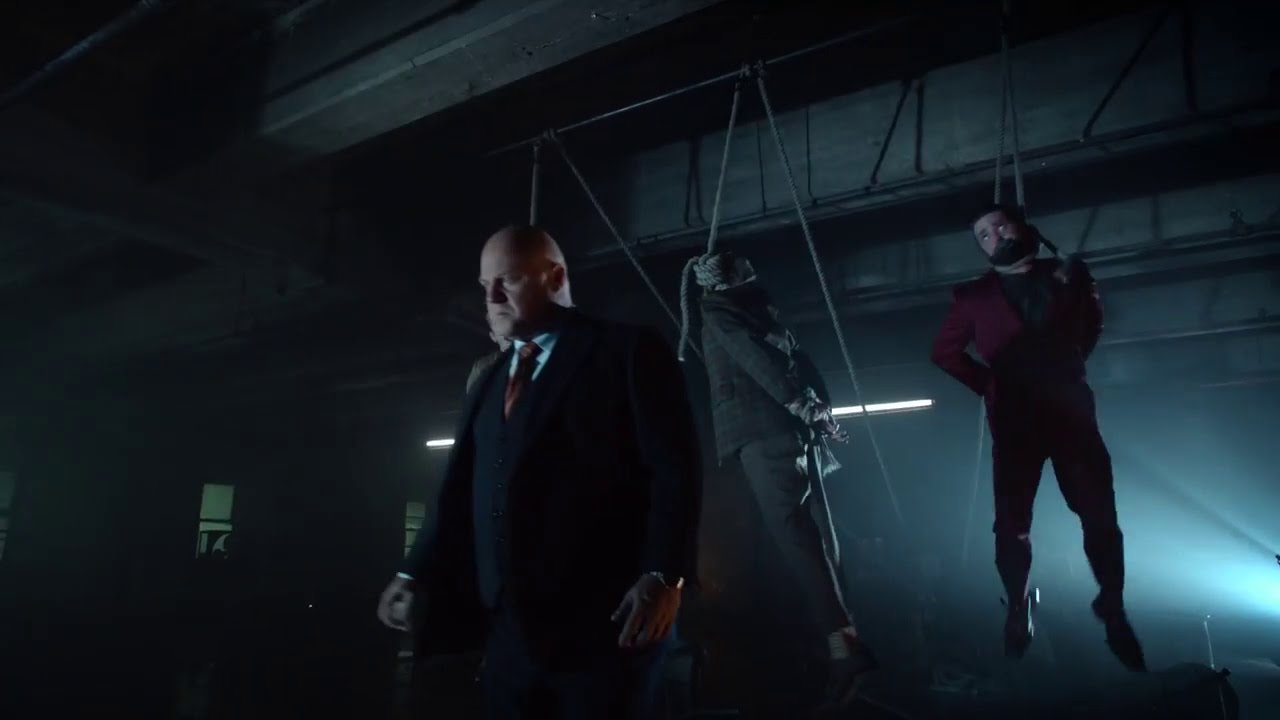 One wonders if Oswald would have to come into Ed's room completely naked, crawl into his bed, and start devouring him before Nygma got with the program.

Again, I struggle with the graphic nature of Gotham.  The show is dark, but something about seeing Barnes hang people strikes me as again, gruesome.  I doubt anything will top seeing a character literally explode on television, and I get that Gotham is going to have violence.  I however still am troubled by the highly graphic nature of the violence, which is why I would not let my young children watch it and maybe my teens watch it with me while cringing.

Again, not throwing the baby out with the bathwater.  Geha and Chiklis were extremely strong as Ivy and Barnes, though Chiklis at times seemed to barely hold on to not slipping into camp.  The rest of the cast was still as strong as ever.

It's in the overall story that I wonder if Gotham couldn't have found something slightly better or stronger.

Next Episode: Time Bomb
Posted by Rick at 1:04 AM