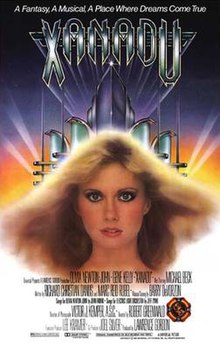 You've got a musical built around disco and roller skating, with Gene Kelly throwing himself in for good measure.  What could possibly go wrong?  Xanadu was a flop when it was released, and gained a reputation for being an embarrassment to almost all concerned: I doubt any clips were used when Kelly received a Kennedy Center Honor.  The fact that Xanadu was his final film perhaps explains a lot.

Looking back at the whole thing from a distance of almost forty years, Xanadu is not a 'bad' film, just a very peculiar one.  Most peculiar, Mama.

Sonny Malone (Simon Beck) is a brilliant but struggling artist, one reduced to painting large versions of album covers.  Out of nowhere a beautiful woman comes roller skating up to him and kiss him.  Sonny also meets Danny Maguire (Kelly), a former jazz master who went into construction and made a fortune.  He lost interest in music after he lost his Muse, and Muse is an important matter, since the mysterious girl who comes to Sonny is Kira (Olivia Newton-John), who in reality is one of the Muses of Greek mythology come to Earth to inspire Sonny.

She also, in a subplot that gets a bit lost in the haze, was the same Muse who inspired Danny to create great jazz (and at one point, do a little softshoe, but I digress).

Kira and Sonny soon fall in love while she guides him and Danny to turn a rundown auditorium into a roller skating nightclub/dance hall to be called 'Xanadu'.  Eventually Kira reveals herself as the Muse Terpsichore, and reveals that her job is just to inspire, not be with mortals.  Danny is too busy and happy to be bringing back jazz in a disco setting, while Sonny is despondent about losing Kira.  He literally roller skates into a mural of the Muses where he asks Zeus (voiced by Wilfrid Hyde-White) to let Kira have a moment with him.  Zeus is not moved, but thanks to the intervention of whom I assume to be Hera (Coral Browne), Kira is allowed to be in a showstopping number on Xanadu's opening night, and be with Sonny once again.

To say that Xanadu is a bit confused is to be extremely generous. It's flat-out bizarre in moments, with plot points that either don't make sense or don't seem necessary.  We see Kira's sister Muses doing some dance numbers, but they are so unnecessary to the story they might as well have been left out.  No one gets as to why Sonny was rehired at the art studio or who his coworkers were, coworkers who as far as I know never got names or again were unnecessary.

A lot of Xanadu is just weird, just totally weird in a TNT 100% Weird style.  You think Gene Kelly could have done something better to end his career, and to be fair Kelly did elevate this bizarre material.  He showed he could still do interesting dance routines, though nowhere near as athletic as his work in Anchors Aweigh or Singin' in the Rain.

However, at times what dignity he lends to the proceedings evaporates in whatever efforts director Robert Greenwald made to make Kelly more contemporary.  A frightfully embarrassing dance number has Kelly trying on various threads in an effort to be more hip and trendy.  This montage leaves one cringing.  One of his outfits makes him look like a gayer Truman Capote.

That is not a repetition of terms: one outfit looked so flamboyant that Kelly managed to come across as more bonkers than when Capote was bombed out of his mind on a television interview.

Xanadu also made the choice with Maguire to suggest that he might recognize Kira as the great love of his life only to pull back and never mention it again.  Why the gods would want to set up a roller skating disco, and what this if anything has to do with Sonny becoming a painter is similarly left unanswered.  Sonny's puzzling acceptance of Kira's non-answers to his legitimate questions, or why he would rush head-forward into the mural on his roller skates with no idea whether this would get him to Kira or literally kill him, well, such things will remain a mystery.

Other times the elaborate musical numbers were just, again, weird.  A long number where Sonny takes Kira to a studio as they romance each other I think is supposed to evoke Singin' in the Rain (especially a part where 'rain' falls on them and they find two umbrellas).  However, that whole number falls disastrously flat when a.) they roller skate to this and b.) they at one point appear to be chased off by a giant Dalek.

While the mash-up between Sonny and Danny's competing visions for Xanadu plays actually well (Sonny's 80's New Wave style versus Danny's 40's swing), the final big title number just goes on and on and on, building to more silliness that leaves you either in shock or in fits of laughter.  While I find nothing wrong with Newton-John's voice (and Xanadu the song itself isn't a horror) you just wonder how any of it is remotely logical.

In fact, while the soundtrack was a hit, and I have nothing against either Newton-John or Electric Light Orchestra who both sung the songs for the film), I can recall only two songs: Xanadu and Magic (the latter not used to the best effect as it's played while Kira roller skates in the rundown auditorium).

When it comes to the acting, Beck can generously be called 'not good' as the lovelorn artist.  Very generously.  In his scenes with Kelly, it looks like Beck is not only not able to see that Kelly is considerably shorter and is speaking over his head, but he similarly has no real expressions or emotions when he speaks to anyone.  I don't want to be too hard on Newton-John, who at least had her singing to carry her up.  Maybe in her defense, Kira is such a blank role no one really could have done much if anything with it, but Newton-John did not have the range to make any of this believable.

As for Kelly, yes, he gave Xanadu what little dignity the film had, and as I stated had a couple of nice song-and-dance numbers. However, when in that frightful costume montage he looks like a gay cowboy on a weekend bender, Kelly can't have thought the final product would build on his legacy.

Xanadu is pretty much a daft film, where by the end you either shake your head or put your hands up to your face in disbelief at what you're watching.  I know I said 'Wow' a lot, though more in shock than in awe.  Bad visual effects, poor acting, a curious premise all conspire against it.

However, in its own offbeat and wacky (or whacked-out) way, Xanadu can be enjoyed as kitsch, a reflection of the odd times it was made.

In the end, sometimes you do have to believe we are magic.