If A Man Answers: A Review 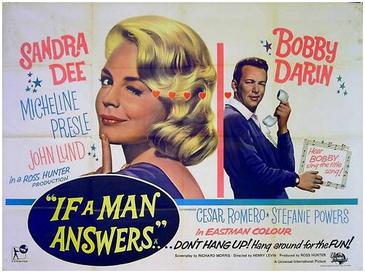 This is part of the Summer Under the Stars Blogathon sponsored by Journeys in Classic Film.  I am thankful to Kristen Lopez for allowing me to participate.  Today's star is Sandra Dee.

IF A MAN ANSWERS

If Sandra Dee is remembered at all by those under 40, it's for the mockery she and her image took in Grease when Rizzo ridiculed both the character of  Sandy and the real-life Sandra in song. Dee was not considered a great actress and her image of virginal sweetness was pretty set by the time If A Man Answers was released.  Dee was the spiritual younger sister of Doris Day (who was also name-checked in Look at Me, I'm Sandra Dee).  In an interesting turn of events, Dee, like Day, made three romantic comedies with the man most identified with her: Dee's then-husband, singer Bobby Darin.  If A Man Answers was their second film together, a comedy of errors and mistaken identity that could mask the suggestion of infidelities going round.

Chantal Stacy (Dee) is the product of a most curious marriage: her father, John (John Lund) is as proper and stuffy Boston as they come.  Her mother Germaine (Micheline Presle) is a former Folies Bergere dancer and very French.  These two influences, which Chantal refers to as her 'beans and souffle upbringing', mix in Chantal: she's coquettish while ultimately pulling back.  Her exasperated father wants her to marry so that he can rest that she will be a respectable lady, and while her mother would like her to marry too she isn't shocked by any of her actions.

A move to New York proves fortuitous to Chantal, as she quickly meets Eugene Wright (Darin), a commercial photographer who mistakes her for a model.  They quickly fall in love and marry, but here is where problems start. Gene now won't hear of his wife posing for photographs, even though that's how they got involved. Chantal for her part is worried that Gene will be lured away by the bevvy of beauties he sees, and at the top of the list is her frenemy, Tina (Stephanie Powers in an early role).  Gene is very, almost shockingly flirtatious with her, though completely faithful to Chantal.  For her part, Chantal is very upset and goes to Maman for advise.  Mother always knows best, giving her the perfect guide in handling husbands: How to Train Man's Best Friend, an instructional guide for dog training.

To Chantal's genuine shock, the book actually works! Gene does pretty much as he's told and is able to be 'house-trained'.  It's going well until Tina spills the beans, and Gene is furious at how he's been had.  Chantal does what any girl would do in a time of crisis: go to Mother.  This time Mother comes up with an even wilder scheme, one that worked wonders for Maman: take a lover!  Not a real lover mind you, but an invented one so as to make her husband more attentive.  She's even willing to let Chantal 'borrow' her lover, 'Robert Swan'.

It's the perfect plan: Chantal will send herself flowers with no cards and her Maman to call, always hanging up 'if a man answers', in this case, Gene. Should Gene ask her where the flowers came from, Chantal can quite literally tell the truth and not be believed.  Once again, Gene finds things very strange when it comes to 'Robert Swan', until Chantal gets a surprise of her own: Robert Swan shows up for dinner!

Robert Swan (Cesar Romero) is delighted to be with Chantal, and even enjoys a 'reunion' with his old flame Germaine, sending both women into virtual hysterics at the goings-on.  It isn't until we discover that 'Robert Swan' is actually Gene's father Adam, with both of them cooking up this scheme to get back at them, that things take a few more turns before all's well that ends well, with Maman about to be Grand-Maman.

If A Man Answers plays like a young adult version of a Doris Day/Rock Hudson bedroom farce, and it's no surprise given that the mastermind behind it is Ross Hunter, the man behind the first and quintessential Hudson-Day film, Pillow Talk.  Apart from the voice-over that introduces If A Man Answers, it has other Ross Hunter motifs: the jaunty theme song with accompanying animation (the theme song written and performed by Darin), the surprisingly risque elements that are immediately tamed (there are two suggestions of illegitimate births and extramarital affairs before things are quickly corrected, the film ends with Darin wearing a dog collar as a nod to having been 'trained' like a puppy), and a lot of mix-ups and befuddling though logical conversations that end with our lovers happily reunited.

Sandra Dee shows here why audiences responded to her: she is cute and perky as our chouchou (the pet name her mother uses).  Dee isn't an idiot in If A Man Answers, but she has a delightful screen presence as our tease par excellence who always manages to stop just when she looks like she's about to indulge.  It's delightful to see how easily and how well she manages to bamboozle Gene with her mix of words and actions.

I don't think that my unabashed love for Bobby Darin to where I'd like to name a son Darin in his honor should have any bearings on the fact I thought Darin had wonderful comic timing as the much put-upon Gene.  He manages to hold his own as someone who is a typical man, one who like all men, can be trained by their much smarter wives to do anything, starting from getting married to them.  From his cynicism about marriage itself (as he says, marriage in an institution sponsored by women for women) to his flustered manner over 'Robert Swan' down to letting dear old Lothario Dad to not even think of going after Chantal, Darin showed a remarkable ability for comedy.

The true standout is Presle as the ever-wise, ever calm Maman, who knows exactly what to do and how to do it.  She offers wise advise to her daughter: be French in the boudoir,  Boston in the parlor, but never get them mixed up.  It's what we say 'a lady in the parlor, a whore in bed', but with a more refined vocabulary.  She also points out to Chantal the logic of her actions in having used a dog training book on John, stating that 'husbands often leave their homes, pets never do'.  Presle was elegant, ruffled only once when presented with 'Swan' (and even then keeping to the comedic spirit, declaring she'd never make up a lover with a mustache).

In their smaller roles, Romero was charming, elegant and clearly in on the joke as 'Robert Swan'.  Powers too manages to walk away with her scenes as the troublemaking Tina.

If A Man Answers is firmly in the tradition of 'women are smart, men are idiots' school of romantic comedies.  It is very firm in the mindset that a woman's main goal is to get a man to marry her, while a man's main goal is to avoid it (and almost always losing for his own good).  Whether it is good to have the dolts essentially hoodwinked by feminine wiles, or to essentially say that men can and should be trained like dogs to do what women want is open for debate.  However, we have to take into account that If A Man Answers is by no means meant to be taken either seriously or literally.

It's supposed to be a sparkling romantic romp about two crazy kids in love.  That's what Sandra Dee and Bobby Darin were in real life: two crazy kids in love with each other.  Neither of their lives ended well, and there was a lot of emotional and physical damage they endured together and apart.  However, If A Man Answers is a nice treat about the wit and wisdom of love, and how to make the man stay.

All that's required is a leash and a fake lover.

Email ThisBlogThis!Share to TwitterShare to FacebookShare to Pinterest
Labels: Blogathon, Review, Rom-Com, Summer Under the Stars