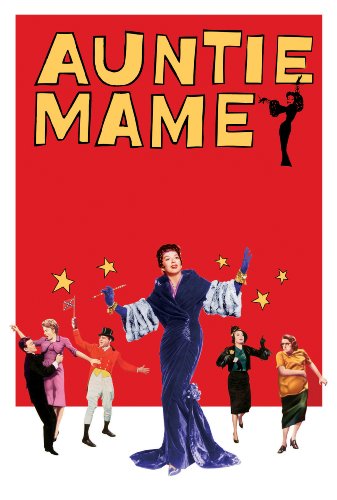 This is part of the Summer Under the Stars Blogathon sponsored by Journeys in Classic Film.  I am grateful to Kristen Lopez for allowing me to participate. Today's star is Rosalind Russell.

It's a wild and wacky world that Mame Dennis lives in.  Auntie Mame, the film version of the hit Broadway show, does so much right, starting with having the original Mame, Rosalind Russell, recreate her role.  It also is a film fully aware that it is a stage adaptation, which allows for transitions that otherwise might not work.

Little Patrick Dennis (Jan Handzlik) is an orphan, his father having dropped dead in his health club.  According to his will, Patrick is to be in the care of his father's sister and only living relative, Mame Dennis (Russell) despite her fierce eccentricity. Only the loyal maid Nora Muldoon (Connie Gilchrist) is there to help Patrick through the transition.  Mame has the legal responsibility but the Knickerbocker Bank has the purse strings.  Patrick's financial trustee is Mr. Dwight Babcock (Fred Clark) who is as uptight and bourgeois as Mame is free spirited and flamboyant.

In the Roaring Twenties, Mame is convinced she must 'open up doors you never dreamed existed' for her little love, which means sending him to the most progressive school and having him associate with all her friends, including stage actress Vera Charles (Coral Browne), who routinely gets drunk at the wild soirees Mame throws.  Though Mame is courted by respectable publisher Lindsay Woolsey (Patric Knowles), she is too busy being a mother to be a wife.

Then come two calamities simultaneously: Babcock is enraged to find Patrick at a school where the students wear no clothes and the Crash of 1929. Mame is wiped out emotionally and financially, Babcock taking Patrick to boarding school, leaving him with her only on school holidays.  With only her wits, panache and savoir fare to keep her going, Mame tries her hand at all kinds of jobs, and fails spectacularly in each of them.  A short-lived 'comeback' with Vera in a touring company of Midsummer Madness is a fiasco, but help comes from a most unexpected source.

While failing as a salesgirl at Macy's, Mame meets the rich Southern oil baron Beauregard Jackson Pickett Burnside (Forrest Tucker).  He is swept off his feet by this Yankee gal, and after a wild fox hunt, she is too.  Despite becoming a world-traveling belle, Patrick (Roger Smith) is never far from her heart.  Sadly, she finds herself now as The Widow Burnside in what can only be called 'most curious circumstances'.

Patrick urges her to write her memoirs, hiring two people to help: the Irish poet Brian O'Bannion and the meek secretary Agnes Gooch (Peggy Cass).  More hilarity and hijinks ensue until Patrick has found love with Gloria Upson (Joanna Barnes), the epitome of WASP narrow-mindedness (what we would call now 'white privilege).  The whole Upson family is pleasant enough, save for their antisemitism and lack of intellectual curiosity.  It's up to Auntie Mame to sort all this out, and help him and her future great-nephew find 'doors he never even dreamed of'. 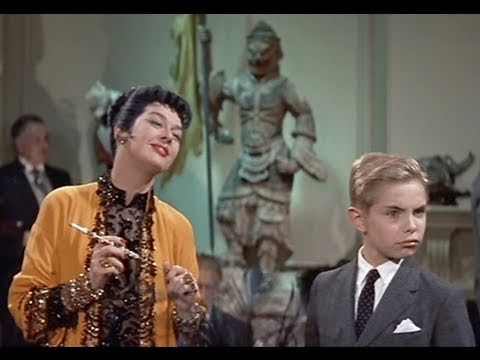 Auntie Mame is a love letter to nonconformists while being perfectly acceptable to those who are a little more square in their worldview.  I don't know if it's fair to call Mame an 'eccentric' in that for the most part, she's perfectly lucid.  I'd qualify her more as a free spirit, who does think 'life is a banquet' and there to enjoy.  She does oppose bigotry and intolerance, but she is also classy and with breeding, or at least posh in her outlook.  Mame is appalled at turns of phrases like 'spitting distance' and holds such people as the boorish Upsons in contempt.

Norah best sums up the character by telling Mame that she's loving...odd, but loving.

Rosalind Russell recreates her Broadway performance, and in the film version, you can see the trappings of the stage show.  Russell was always able to do rapid-fire speaking, which Mame has in spades.  It comes at times close to being very broad, but this 'broad' was meant to be wild and exaggerated, so Russell was accurate to the character.

What is fascinating about Russell in Auntie Mame is how quickly she is able to go from a wild, broad comedy to straight, pure, tender drama.  The best example comes after the disastrous Midsummer Madness production where Mame inadvertently made the very serious, stuffy drama into a comedy.  After seeing all the hijinks involving her jangling bracelet (leading Vera at one point to sharply ask her in a stage whisper, 'What do you have back there: reindeer?!'), Russell is left alone on stage, the realization of both her failure and the dire financial strains overwhelming her.

She can go from making one laugh to making one almost cry on a dime, and while I figure some have a hard time enjoying the very broad nature of both the character and the performance, I think both worked so well that it made the character delightfully bonkers and plausible.

Another thing that worked extremely well was the relationship between Mame Dennis and Vera Charles, the original frenemies.  Cass was the other cast member apart from Russell to receive an Oscar nomination, and while her Agnes Gooch was slightly amusing, I never saw anything particularly great or hilarious in her performance.  I was much more impressed by Browne, who should have been nominated either with Cass or in her place.

Browne and Russell made a great double-act, playing off each other brilliantly.  Whether it was through bonds of genuine affection for each other or driving each other insane with their mutual self-absorption, they worked so well in being able to keep up with each other.  Browne was about the only castmember who could match Russell's rapid-fire delivery, and she was hilarious as the droll, oftentimes drunk grande dame of the theater.

I don't think he's been given much credit, but Handzlik as the younger Patrick gave an equally strong performance.  It's Patrick's total innocence in both how he sees his oddball aunt and the things she's taught him, such as making a martini for a shocked Babcock, that sells the outlandish situations and things he says.  He plays it perfectly straight when, for example, he recites all the words and phrases he doesn't understand from 'libido' to 'heterosexual'.

At the heart of Auntie Mame's greatness is the screenplay, and it's not surprising given it was adapted by Betty Comden and Adolph Green, one of the greatest writing duos in film or on Broadway.  Not having seen the play or the musical version, Mame (except the lackluster film version), I can't say what Comden & Green created and what they brought in.  However, they created a wonderfully witty script, full of double entendres that also worked to reveal the characters with an economy of words.  Gloria Upson, Patrick's bourgeois fiancee, makes what she considers to be a compliment when first visiting Mame's penthouse. 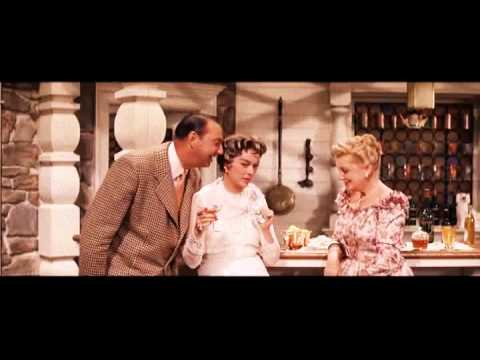 Admiring the decor, she tells Mame, "Books are very decorative, don't you think?"  That sums up Gloria and the Upson's total lack of intellectual curiosity.  Her total stupidity is expressed when upon learning that Mame's memoirs are to be published, chides her almost-WASP fiancee.  "Patrick, why didn't you tell me your aunt was literate?" she drawls in a stuffed-up voice, completely unaware of the idiocy she has

We see Mame's character revealed earlier when Babcock tells her they need to make sure Patrick's educational choice must be 'exclusive and restricted'.  "Exclusively what and restricted to whom?", Mame asks in a tone both elegant and annoyed.  She, unlike the WASP Babcock, won't accept bigotry.

Auntie Mame revels in the elaborate sets and wardrobe, which reflect the wild and wacky world of Mame Dennis.  It also is pretty open about being somewhat stage-bound, as director Morton DaCosta will often end a scene by having everything go dark except for a large spotlight that centers around Mame.  It doesn't strictly take away from the story but sometimes it might a bit jarring to be into the film only to have it almost turn into a play.

Auntie Mame is a comic delight, with a wonderful turn by Rosalind Russell who showed the range she had.  It has a witty and fun script and performances outlandish and outrageous: much like Mame Dennis herself.  A celebration to live, live, live, how the world would benefit if we did heed her advise.

Life is a banquet, and most poor suckers are starving.