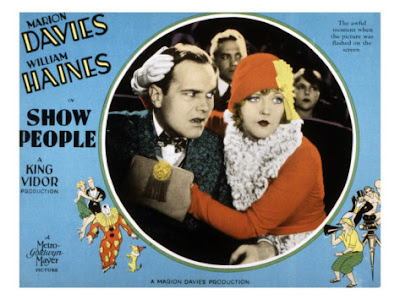 This is part of the Summer Under the Stars Blogathon sponsored by Journeys in Classic Film.  I am thankful to Kristen Lopez for allowing me to participate.  Today's star is Marion Davies.

It's a terrible disservice to remember Marion Davies as either William Randolph Hearst's longtime mistress or the inspiration for Susan Alexander, talentless drunk harpy, from Citizen Kane.  Davies was a born comedienne, delightfully versatile with a wonderful mixture of charm, elegance, and zaniness that would have probably made her a premiere funny girl if not for Hearst's involvement. Show People is not just a showcase for Davies' unique brand of comedy or even a spoof of Hollywood.  In some ways, it's one of the first meta film before the term was used.

In a strange turn, it could also be its own version of Citizen Kane, reflecting how a bright comic performer was essentially done in by artistic pretensions.

Southern belle Peggy Pepper (Davies) has come to Hollywood to become a legitimate actress, chaperoned by her father, Confederate General Marmaduke Oldfish Pepper (Dell Henderson).  It's a bit of a task getting into showbiz but Peggy does.  She meets brash low comic Billy Boone (William Haines), who gets her into one of his slapstick shorts.  Peggy is mortified when she unwittingly becomes part of a comedy bit involving her getting seltzer splashed on her face.  She's despondent, but Billy comforts her, telling her she needs to take it on the chin.  Ever the trouper, she does.

To her surprise, her comedy film becomes a wild success, so much so that even Charlie Chaplin himself (in one of Show People's many cameos) asks for her autograph, even if Peggy at first has no idea who 'that little man' was.  Despite that success, she still aspires to fine art like those of John Gilbert in such films as Bardelys the Magnificent (Gilbert doing another cameo).  Peggy manages to attract the attention of bigwigs at High Art Studios, which offers her a contract, but not to Billy.  While Peggy is sad to say goodbye to all the friends she's made at Comet Studios, and especially to Billy, she moves forward.

Now billed as 'Patricia Pepoire', she at first finds the adjustment to grand cinema a bit jarring.  She still is down-to-Earth enough to not be impressed when she sees 'Marion Davies' on the lot (Davies essentially doing a cameo as herself in a film that she stars in).  However, she soon starts gaining great pretensions about her 'craft' and her new costar/boyfriend, Andre Telfair (Paul Ralli), who claims to be a nobleman.

While shooting their newest grand film on location, Billy shows up to her set, his crew also doing location work.  Billy laughs at "Patricia Pepoire's" pretensions as well as at Andre, whom he claims worked as a waiter selling spaghetti with him early on.  Our posh Patricia angrily dismisses him, and a sad Billy goes back to his lot, working to make 'em laugh.

Patricia is told in no uncertain terms she is becoming unpopular with the public, who are rejecting her grand artistic statements and want a more real persona back, if not a full-on return to her comic past at least someone audiences can relate to.  She scoffs at such notions, and decides what she needs is some good publicity.  That means marrying Andre and becoming a real-life Countess.

Billy, too much in love with Peggy, goes to her wedding determined to stop her.  At first she won't hear of it, but some seltzer to her face and her throwing a pie in anger at Billy, only to end up on Andre's face, makes her see how pretentious she's gotten.  With that, she rushes to Billy.

Show People is in a technical sense not a silent movie.  We can hear the roar of the crowds, the rattling of dishes, and a musical score.  I don't know why MGM opted to not make this a talking film, but had it done, we might have lost some wonderful moments.

At the heart of Show People's delight is Davies.  She shows herself a wonderful comedienne, able to play scenes for laughs.  One of the is when she is informally 'auditioning' at a casting office.  To show off her range, she uses a handkerchief to hide her face as her father introduces her wide range: meditation, passion, anger, sorrow and joy.  Each mood has Davies revealing a different face to 'express' said emotion.

Davies is obviously playing this for laughs, but she has such a wonderful, expressive face that lets her get away with an exaggerated manner.  She is funny whenever she has to face 'indignities' and when she becomes the sophisticated 'Patricia Pepoire'.  Even when Peggy doesn't mean to cause trouble, such as when she crashes various sets trying to get to Billy's set, Davies makes Peggy's innocence comedic without being idiotic.

Haines is now best remembered as the star who walked away from movies rather than give up his longtime partner, refusing to hide his homosexuality for the sake of fame.  In Show People, it's more than his good looks that got him to be among the most popular and well-received stars of the era.  He is great in the funny scenes and in his ability to knock down pretensions wherever he saw them; he is also endearing when a scene requires a lighter touch.  How he comforts a despondent Peggy when she finds she was essentially tricked into being a comic foil shows a tenderness that is used effectively.  Haines even manages to show disdain and irritation when he's forced to stay and watch something he feels is far too grandiose for its own good.

The film is in many ways both a love letter and a send-up of Hollywood, poking gentle fun at the newfangled and wild industry.  From the mocking of the 'High Art' Studios productions to how Peggy in her naivete accidentally walks behind two actors shooting their own scene, Show People enjoys having fun at how films come to life.

Of particular note are the various cameos from silent film stars.  Even now, the scenes with Chaplin, Douglas Fairbanks, Renee Adoree, William S. Hart, and even director King Vidor himself playing 'King Vidor' show that Show People was pretty much in on the joke.  The entire plot of our Peggy or Patricia marrying a count is clearly a reference to another silent film star, Gloria Swanson, who did exactly that.  The cameos, some lost to today's audiences, must have been a sheer delight for contemporary ones.

As I said, Show People was meta before meta was cool.  The film was highly clever in having Marion Davies appear as herself to a disbelieving and disinterested Peggy.  That was the fun part.  The less funny part is that Show People plays as a comic but still eerie version of Davies' life in the way that Orson Welles' Citizen Kane played as his own.

Show People showcases Davies' masterful comic abilities, but her patron Hearst did not like her in these goofy roles.  His taste ran to more elegant features, which is why despite her wonderful light manner she was pushed into lavish epics such as When Knighthood Was in Flower.  These types of films downplayed Davies' true gifts in comedy and ironically impeded rather than enhanced her career.  Once she got into more 'serious' films, like Patricia found, the public started turning away from her.

As a side note, I think the same happened to Mary Pickford once she moved past the 'little girl' image she had mastered.

If Hearst had allowed his mistress to do more comedies in which she excelled versus the costume pictures she was made to do, Davies might be better-remembered as a female Chaplin or Harold Lloyd.  She might even have been able to eventually do more dramatic work (and her scenes of sadness when not played for laughs show she could do drama).  Davies might have been able to go into sound with greater success.  In short, Show People is missing only the domineering lover to be an unofficial biopic.

Putting that all aside, if we go by the film, we see that Marion Davies was a delightful screen presence: a gifted comedienne who was expressive, boisterous, and amusing, without short-changing drama when it called for that.  Show People is a showcase for Davies, a wonderful, funny movie about the insanity of movie-making and those who make them.