The Heart Outright: A Review 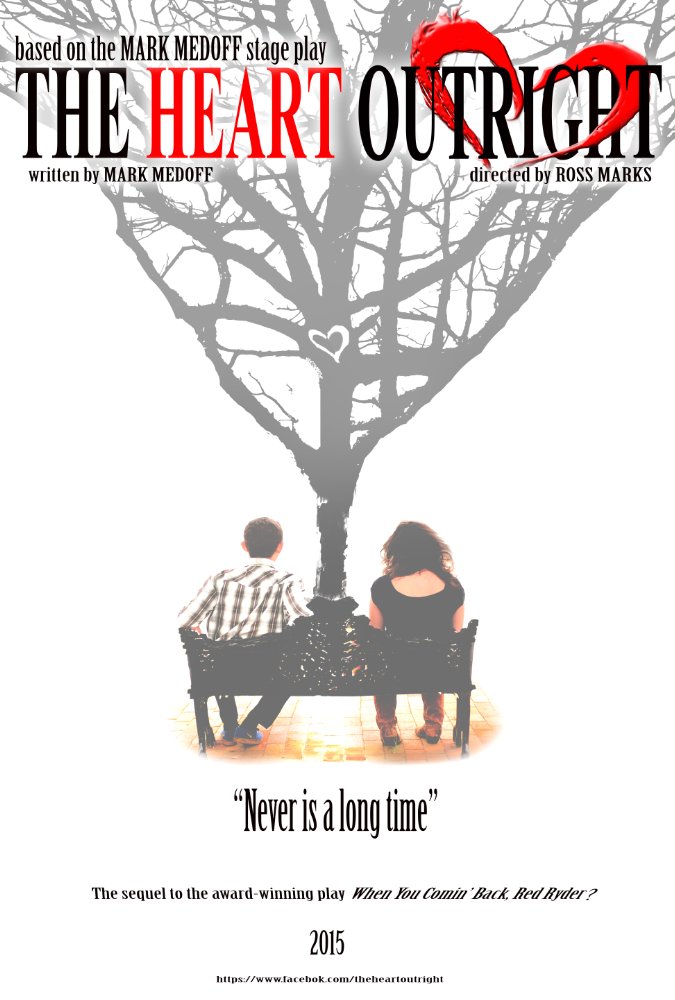 It's a bit difficult for me to review The Heart Outright only because I have to keep in the back of my mind the fact that this independent film is essentially a college paper.  Director Ross Kagan Marks is primarily a New Mexico State University professor in their Creative Media Institute.  Another Mark (Mark Medoff), who also works at NMSU, adapted his own play to the screen.

The Heart Outright is a sequel to a previous Medoff work, When You Comin' Back, Red Ryder?. As if to answer this question, The Heart Outright revolves around said character coming back to his old haunts to bury his mother and deal with other ghosts.

A brief albeit jumbled intro fills us in on what we should know before the film begins: on June 16, 1969 Steven 'Red' Ryder (Brad Makarowski) was held hostage at the Foster's Cafe in Las Cruces, New Mexico by Teddy, a disturbed Vietnam veteran.  Also held hostage was waitress Angel (Jessica Medoff, who I believe is also Marks' wife).  This is told in voice-over, quick shots, and faux-news reports.

Thirteen years later (setting it in 1982), Angel rushes to make the funeral of Stevie's mother, who I think was the owner of Foster's and whom she had bonded with after the horrors of the hostage situation.  She barely misses it, but she does find Stevie at the bus stop, run by wacky Dickie Turpin (Josh Rowan), whom I could never decide whether he was a simpleton or just plain bonkers.  As Stevie waits for the bus, he and Angel wander through town, have lunch together, get in a tangle with Stevie's stepfather Ray (Medoff himself) and as they go around, find that despite themselves and their hindrances (his marriage and war 'injury', her pregnancy), they still have a strong bond that isn't easily broken.

Stevie finds a semblance of peace within himself, having struggled between the ideas/ideals that people have of him and his own ideas of himself. 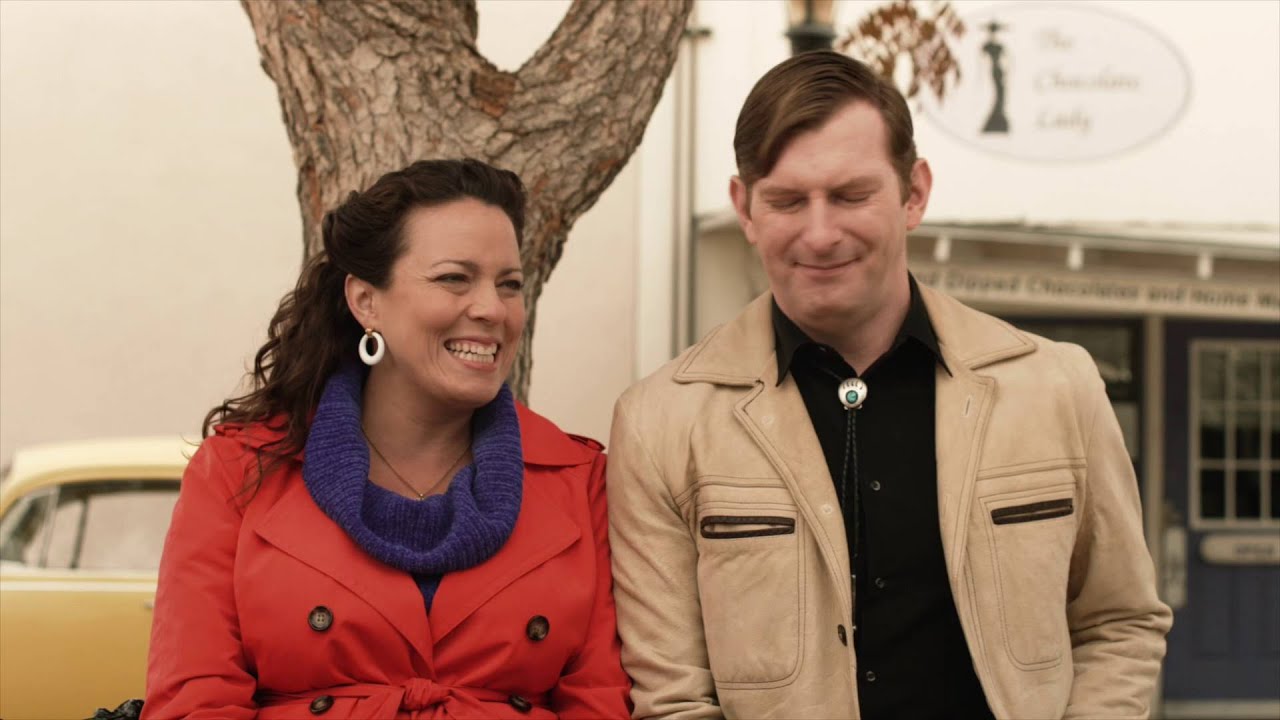 Always keep in mind that The Heart Outright is a local film (by local, being southern New Mexico) made by university students (on a shoestring budget in 10 days).  That is neither a slam against it or an excuse to note if there are faults within it.  It's a statement of fact that should be used to both temper any overt criticisms or give it excessive praise.

I found the film to be well-directed and acted, with some particular standouts.  At the top of my list is Jessica Medoff, who was heartbreaking as Angel (more than a metaphor in that name, I imagine.  I see you, playwright).  Whether sharing moments with other cast members or having monologues, the mixture of hope and regret she displays is a wonderful performance.  Her father too, in his brief moments, proved quite menacing as the abusive father, though this plot point came and went relatively quickly.  Jessica Medoff was the clear standout in terms of performance, and while I understand why Medoff's pregnancy needed to be written into the film, frankly, I didn't notice it or give it any thought.

Would that I could say the same for Makarowski and Rowan.  Makarowski, for the longest time, looked slightly comical when attempting to be serious, more perpetually perturbed than in emotional crisis.  His character was very tightly wound, and while I understand that was how the character was it still looked as if Makarowski thought it was a comedy he was in, his expression a curious grimace.  It isn't until the end when he makes shocking revelations about himself that he makes Stevie a truly tragic figure, one in desperate need of an Angel.  I don't know if we were meant to notice that Stevie didn't move his left arm long before Angel even recognized there was something amiss, but at what is meant to be a big fight, the whole thing was slightly tinged with humor.

I still could not figure out whether Rowan was meant to be comic relief or was just nuts.  I didn't understand why he was so obsessed with Stevie's actions of thirteen years past, or why he carried around an article of Stevie's actions at the cafe, or why he didn't seem to know how to behave in public.  Rowan never made Dickie into a real or plausible person, just someone pretending to be someone who might be quite insane.

One thing that I would say Marks might have done better is in how the music fit in at certain points. Country music singer/songwriter Josh Grider wrote the score and songs for the film, and they are hauntingly beautiful.  A bit reminiscent of Ryan Bingham's The Weary Kind from Crazy Heart, Grider's songs are generally mournful and somber with a touch of love, like the film itself. They are wonderful, so wonderful it would be great if they found their way into a Best Original Song playlist.

It's not the songs or music that I have an issue with.  It's where the music went in.  At what is supposed to be a climatic dramatic scene for Makarowski, the guitar seemed to echo him, getting louder and louder as Stevie got louder and louder.  Part of me understands the logic behind that (you want to match Stevie's growing anger with the music), but it ironically made Stevie's dialogue harder and harder to hear.  The louder the music grows, the more drowned out Stevie's rant becomes.

I do admit that when we heard a harmonica play as the bus was headed our way, I did groan inside.  Granted, the harmonica was played by a homeless man in the bus stop, and to its credit The Heart Outright kept the music to a naturalistic setting (the 'battle' between the mariachi band and the folk singers notwithstanding). However, the harmonica bit was to me a touch too much.

The opening was also a bit jumbled: getting the story of When You Comin' Back, Red Ryder? in bits and pieces put one slightly off-balance, where perhaps we could have opened with Dickie rereading the article to give us how things were before Stevie went back to bury his mother.

If it sounds as if I'm being excessively harsh, that isn't my intent.  For a film with limited resources and a short shooting schedule, one that was almost a school project, The Heart Outright has many positives: a wonderful turn by Jessica Medoff and an excellent score/song list by Josh Grider.  Again, one has to judge the success of The Heart Outright based on what it is, not what it would or could have been if it had bigger names or bigger budgets.  The film has a good story, some good performances, moving songs and is well-crafted.

It makes an excellent calling card for those involved; there were things I would have changed (why do Hispanic cleaning ladies always end up not speaking English?).  There were some things that I did find odd (how did Angel so quickly broker piece between the folk singing trio with a child that had an infection and the mariachi band that didn't speak Spanish, let alone what that had to do with anything?), The Heart Outright is proof positive that good films don't require big budgets, just a lot of heart.