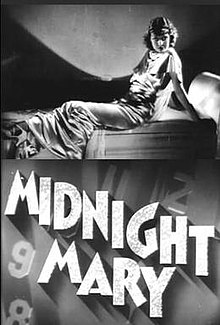 This is part of the Summer Under the Stars Blogathon sponsored by Journeys in Classic Film.  I am thankful to Kristen Lopez for allowing me to participate.  Today's Star is Franchot Tone.

Pre-Code is now a catch-all term for films made up to or slightly past the enforcement of the Motion Picture Production Code, which regulated just about everything from whether you could show a married couple in bed (you couldn't) to whether criminals could get away with it (they couldn't) right down to whether the clergy could be ridiculed (it couldn't).  Some see Pre-Code films as 'brazen' or 'decadent'.  Some see them as 'honest' or 'gritty'.  Midnight Mary is brazen and gritty and shockingly risqué, even for the era.  It has a surprising turn from the lead actress, and minus an uncharacteristic Pre-Code ending, holds up surprisingly well.

Mary Martin (Loretta Young) is on trial for murder.  This dame don't care none: casually reading a fashion magazine when the jury is sent out to deliberate.  As she waits for the jury's verdict, she goes into a long flashback remembering how she got there.

An orphan at nine, Mary finds herself getting into problems even if she doesn't cause them herself.  Already having served time for a crime she didn't commit, she falls for mobster Leo Darcy (Ricardo Cortez), who makes her his moll.  Mary's only real friend is Bunny (Una Merkel), but despite her surroundings of wealth and glamour Mary wants more out of life.  She in particular yearns to be a respectable lady, far from her background, and aspires to better things: more education and an actual job.

However, Leo wants to rob a casino, so Mary and Bunny are his moles: the former passing herself off as another high-roller, the other already there as a hatcheck girl who will help them rob the place.  As it so happens, upper-crust lawyer Thomas Mannering, Jr. (Franchot Tone) goes to the casino and is instantly smitten with our Mary.  As Leo and his mob rob the place, a security guard manages to interrupt things.  In the confusion and chaos of the situation, where Leo tries to kill Thomas, the latter and Mary flee to Thomas' home, where they openly discuss sex. Once she gets back to the hideout, she tells them she's done with the seamy side of life and wants out.  Leo doesn't protest, but tells her she'll be back.

Mary attempts to go straight and goes to Mattering for help.  He becomes her patron, paying for her secretarial education and getting her a job at the law firm.  Mary soon starts finding joy in her new job and is moving up in respectability.  However, things keep conspiring against Mary, for the lawyer she works for, Mr. Tindle (Ivan Simpson) is really a dirty old man who accosts her after hours.  Mattering finds them as Mary attempts to struggle and after a talk admit their love for the other.

Mary and Thomas talk marriage, but once again, fate has an ugly turn for our heroine.  She spots the copper who knows of her involvement in the casino robbery.  To spare Thomas scandal, she turns on him, insisting he was a sap and that she was just going to use him for money.  She leaves, and despite pressures Mary doesn't reveal anything about the robbery because she really doesn't know where any of the gang is.  She's sent up the river for three years.

Once out she tries again to get a respectable job, but her efforts meet in failure.  She then is spotted by Leo, who is still attracted to her.  Finding no way out, she agrees to go back with him and has resigned herself to being back in this nefarious fold.  She soon starts finding a semblance of happiness when by coincidence the gang goes to a nightclub where of all people, Thomas is there.  He has already married but it's an unhappy one, he having grown more responsible and Mrs. Mattering less so.  While Thomas is thrilled to see Mary again, she is now conflicted: loving Thomas, but aware of Leo's wrath.

Leo is fully enraged with Thomas, knowing him from the botched robbery.  He also isn't keen of him hitting on his woman, and after a fight Leo chases after Thomas' limousine.  Unbeknown to Leo, he killed Thomas' best friend Sam (Andy Devine) by mistake.  Mary knows that Thomas' life is in danger and tries to warn him, but when she returns to Leo's (he in his haste having left Mary behind), her lies are discovered.  Leo smacks her around a few times then gets ready to go find Thomas.  Mary, however, beats him to the punch, shooting Leo before he leaves.

Back to where we started, the jury finds Mary guilty of murder.  Before sentence can be pronounced, Thomas rushes into the court insisting on a new trial due to new evidence: his own.  He tells the shocked court that Mary wouldn't reveal the reason for the murder because it was about him, that she was trying to protect him.  He also admits he still loves Mary.  The film ends with Thomas divorced and the two of them in jail, waiting for their trial but at least together. 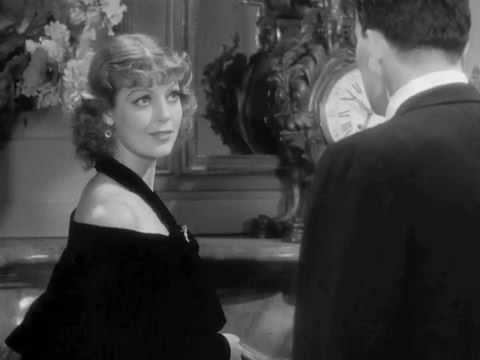 In an odd way, Midnight Mary might be a precursor to the incoming enforcement of the Production Code by the way it ended.  The happy ending feels forced and untrue to what we have already seen: a story involving out-of-wedlock births, the slapping about of our two 'broads', wanton sex, lechery, a mostly unrepentant criminal, and most scandalous of all, open talk about sex!

Midnight Mary not only talks about having sex far outside marriage but even uses the word itself, 'sex' in reference to the carnal pleasures of the flesh.  When Thomas and Mary go to his place, long after respectable hours for an unmarried man and woman to be alone, the dialogue by Anita Loos (who is best known for writing Gentlemen Prefer Blondes) doesn't overtly state "let's go have sex" (even for the Pre-Code era, that, along with openly mentioning Bunny was knocked up, would have been way too far).  However, it's perfectly clear that screwing around is exactly what Thomas would like to do.

It wouldn't be as if Mary would put up much of a fight, given we'd already seen her openly cavorting with other men and was basically living with Leo without a respectable wedding ring.

Midnight Mary is very open about the seamy side of life, and the fact that it was made by MGM, the very model of posh and elegant productions that would not only boast of 'more stars than there are in Heaven' but was the creator and promoter of the Andy Hardy series as the ideal American family makes it all the more shocking.  Perhaps one could expect something like this from a Warner Brothers or a Columbia Studios on Poverty Row, but MGM?

Loos and director William Wellman shaped a story that wasn't just about a dame that don't care, but a true Portrait of a Woman, a good woman who finds herself in awful circumstances not of her own making.  This is accomplished by the performance of the most unlikely tramp in cinema: Loretta Young.

Long before she twirled into a room to introduce her newest lesson in morality on The Loretta Young Show or was considered the epitome of elegance, grace and moral rectitude, Young played a wanton woman who enjoyed men and who could turn on a dime.  I think Young fans who know her only from her show would be shocked to see her as a brazen, wanton woman.  However, she was nobody's floozy.

Young's performance reveals a woman who really was at heart a good person, who wanted class and a better life far from the squalor that she came from.  We see this in little details, like her affinity for art and reading of high-level books for pleasure.  She wasn't just some doll for a gangster.  Mary was actually a decent person who wanted to do the right thing but found herself constantly joining the wrong people just to survive.

Young makes Mary brazen and at the same time, almost innocent and pure of heart.  It's an absolutely wonderful and brilliant performance, touching, heartbreaking, but when she plays a tough broad, she makes it believable that someone like Thomas would believe her lies when it's clear she was lying.

Tone was playing the predominantly carefree, affable, and slightly dumb man-about-town, and he performed it well.  It wasn't as if Thomas Jr. had much depth to him, but I was impressed with how Tone did manage to be more dramatic at the end when he has his moment of high drama at the courtroom.

The difference Thomas and Mary is that he drinks champagne out of a champagne glass, she drinks it out of a coffee cup when they talk about sex, subtly underscoring his posh background to her lower-class roots.

Devine and Warren Hymer as Angelo Ricci, dimwitted boy-toy to Bunny, were the comic relief.  Devine in particular seems wildly out-of-place in this gritty drama, constantly singing Blood on the Saddle in his distinctive high-pitched voice. Hymer was much better as the dumb Ricci, who could be perpetually flummoxed when asking people about his new coat's fit but could be cruel as he slaps Bunny around.

Merkel's performance as Bunny, the broad with few brains but loyal to her friends to a fault, was good, almost charming in her mix of toughness and tragic abuse.

Cortez was not bad but to my mind a trifle self-conscious as mobster Leo, as if he knew he were playing a part and wanted to show he could play a part.  His death was slightly comical, as was Young's bobblehead routine right afterward.

If not for the last few moments of Young bobbing her head and Cortez's death scene, along with what seems a forced happy ending, I would have rated Midnight Mary higher.  However, thanks to Loretta Young's performance in particular, and not a bad one from Franchot Tone, Midnight Mary is not just a sleazy, tawdry Pre-Code picture.  It's really a sad tale of a good girl who never went bad, just was pushed that way.