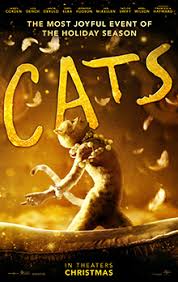 Cats has in its brief time as a theatrical release achieved an infamy as one of if not the worst film of 2019, a misfire of epic proportions. Having finally seen Cats the film, I can say it is not horrible.

Contrary to what has been written, Cats the musical has something akin to a plot even if based on the time I saw Cats on Broadway I would say it's more of a revue than a full-on musical. Essentially, a group of Jellicle cats 'audition' for the wise old cat Old Deuteronomy, who has the power to give one particular cat a whole new set of nine lives.

Each cat sings a song about him/herself with the other cats at the "Jellicle Ball" joining in. Only Grizabella the Glamour Cat sings not about herself per se but about her regrets in Memory, the show's breakout song (and I'd argue the only song from Cats anyone actually knows). In the end, Old Deuteronomy makes his choice and the chosen cat rises to the Heaviside Layer and a new life.

Cats the movie opted to put more of a structure by having all this seeing through the very wide-eyed wonder of Victoria (Francesca Hayward), abandoned on the London streets. Taken in by the other Jellicle cats, Victoria sees all these cats sing and dance songs about themselves. There's a malevolent force, however, in Macavity (Idris Elba), who wants to win the competition and has been spiriting away the competition.

With Old Deuteronomy (Judi Dench) watching, the various cats essentially make their case but Macavity will not wait. He abducts Old Deuteronomy with some help from his Cat Friday Bombalurina (Taylor Swift) and threatens her with drowning unless she awards him the prize, which she refuses. A last minute-save brings Old Deuteronomy back to the Ball and she makes her choice: Grizabella the Glamour Cat (Jennifer Hudson).

As mentioned, I saw Cats on Broadway and I didn't hate it. I liked it: I was entertained if a bit puzzled by it all. Some good songs and a fantastical premise that worked on the stage was good for a night's light entertainment. When I saw Cats, however, I did not think it would work as a feature length film, primarily because to me again it was more of a stage revue than a plot-driven musical.

Director Tom Hopper, who adapted the show with Lee Hall, opted to try and sort out or perhaps ram a plot into Cats, but I think that ended up making things more bizarre. While my memory of any actual plot within Cats is sketchy, I genuinely don't remember any dancing cockroaches in Cats. 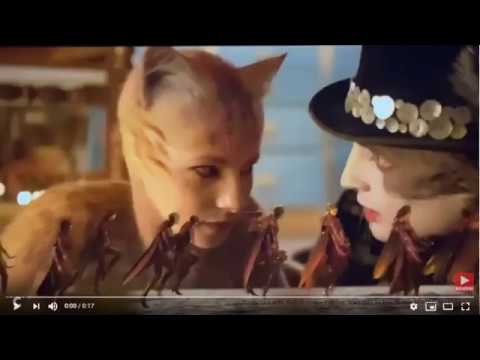 Dear God, the Dancing Cockroaches (which come to think of it, sounds like a good band name). As if the small singing mice apparently abducted from Babe were not already oddball enough during Jennyanydots' number, you had a flat-out bonkers Busby Berkeley-type musical number involving cockroaches, some of which our tubby tabby munched on as they tap-danced across (and under) a kitchen table.

Jennyanydots: The Old Gumbie Cat sequence looks as if it came from a literal fever dream, something you would see when in the fit of a medical emergency. If memory serves correct, Lucille Ball once saw a group of roaches marching on her stomach to Seventy-Six Trombones, but at least her hallucinations were due to the medication given to her after suffering a stroke. The whole number looks insane, leaving the viewer either gasping in shock or on the floor in laughter.

Not that many other numbers looked sane or rational, and that isn't even the worst of it. Due to the revue-like structure of Cats, you really don't see why we have all these cats. Rum Tum Tugger does his bravado number and then essentially disappears. You have the same for Skimbleshanks the Railway Cat, who does his bit but who has no reason to be in the film before or after.

It's here that I think we can put down a major reason, apart from the Dancing Cockroaches or Babe-like mice, as to why Cats is such a disaster. Skimbleshanks has an elaborate dance number culminating in a tap-dancing montage. Leaving aside the illogic of cats with human hands and feet (obviously, we didn't get the print with the 'enhanced' yet Oscar-shortlisted Visual Effects), the cutting for this number was horrendous.

Fred Astaire and Ginger Rogers knew that dance on film needed to be seen. Astaire would always insist on long shots to see the whole body move, and Rogers once bemoaned the number of close-ups in Staying Alive.  "These kids think they can dance with their FACES!" she I understand complained, meaning that the actual dance was sacrificed to see the dancers' reaction. Cats, similarly, has too much wild cutting to let us appreciate the mobility and dancing.

There are some moments where one can see some dancing, but even those are drowned in excessive production design and lights that take away from what should be elegant and moving moments.

In the Skimbleshanks number, we see close-ups of the tap-dancing feet and quick cuts of a group dance, but the focus on the elaborate numbers versus the number itself pushes the production down.

In terms of acting and singing, it's again a question of 'what were they thinking'? Only Davidson as Mr. Mistoffelees emerges from this fiasco unscathed, the closest thing to a legitimate performance. It helped that he was given something of a motivation: the once-formerly great magical cat now unsure and frightened of failure.

In her one number, I don't see how Swift is thought of as this musical genius, her generation's combination Ella Fitzgerald/George Gershwin, and while I don't think Beautiful Ghosts (the one new song she co-wrote with Lloyd Weber) is good, it was well-integrated into the film. Poor Elba did what he could but one isn't that scared of Macavity.

Again to be fair, McKellen was not bad but Dench's Old Deuteronomy was slightly more embarrassing than when as Queen Victoria she belted out I'm Called Little Buttercup only in Victoria & Abdul she was meant to be tottering. Corden hopefully will never live his cat-turn down and Hudson, all snot-nosed and bad Memory cover, at least has the benefit of not being on-screen long enough to hold it against her.

A long-running gag on the television show The Nanny was on how the male lead, a Broadway producer, forever was berated and berated himself for having turned down Cats only to see it become highly successful. If there were ever a The Nanny sequel, perhaps the running gag could be that Mr. Sheffield ended up producing the film version of Cats.