Knives Out: A Review

Knives Out is a throwback to an Agatha Christie-type whodunit with misdirection, a lavish setting and a cast of likely suspects all investigated by an eccentric but brilliant detective. I also understand it's meant as a comedy, but I don't remember laughing once.

The morning after his eighty-fifth birthday party, mystery novelist Harlan Thrombey (Christopher Plummer) is found dead by his housekeeper Fran (Edi Patterson). With his throat slashed and a bloody dagger lying near him, the police believe it a suicide.

Is it? Southern-toned detective Benoit Blanc (Daniel Craig) has been hired by a mystery figure to find out, with police detectives Lieutenant Elliott (LaKeith Stanfield) and Trooper Wagner (Noah Segan) most accommodating. The Thrombey family is full of suspects, each with his or her own reason to want to old man dead.

Could it be his son Walt (Michael Shannon), recently cut out from running his dad's publishing empire? What about Walt's brother-in-law Richard Drysdale (Don Johnson), who fears Harlan will expose Richard's extramarital affair to his wife Linda (Jamie Lee Curtis)? Then there's Richard and Linda's wastrel son Hugh Ransom Drysdale (Chris Evans), who had a bitter argument with his grandfather the night of the party. There's also whacked-out Joni (Toni Collette), the widow of one of Harlan's sons who Harlan has discovered has been double-billing him for her daughter Meg's (Katherine Langford) schooling and pocketing the difference. 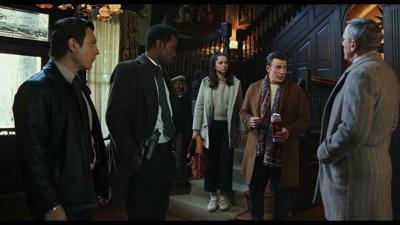 Meg and Walt's son, the "alt-right troll dips**t literal Nazi" Jacob (Jaeden Martell) seem the least likely suspects, but suspects all the same. Then there's Harlan's loyal nurse, Latina immigrant Marta Cabrera (Ana de Armas). She doesn't appear to be a suspect, especially given she is incapable of lying, vomiting every time she tries. It's not until the shocked family discovers Harlan changed his will to give Marta everything that she goes from least to most likely.

Twists and turns abound, with Ana flashing back to the truth of Harlan's death but Ana's guilt appearing more and more likely. If she's guilty then the will is vacated and the family gets the inheritance, but Benoit Blanc eventually stumbles on little details that reveal who the real killer is among the greedy lot.

The most I can say about Knives Out is that it's...fine. I think too many of my brethren are overpraising Knives Out as the equal to Death on the Nile or Murder on the Orient Express when, while logical up to a point, it isn't as good as it's been made out to be.

Writer/director Rian Johnson does well in keeping things flowing in a breezy manner, but I'm perplexed over who Benoit Blanc is seen as a "great detective" when he didn't do much detecting to begin with. A lot of information wasn't discovered by our oddball Raging Cajun, but by having the information fed via Ana's flashbacks. Maybe it was meant for us to know so much prior to Blanc knowing, but if so, he shows himself to be less brilliant and more lucky. 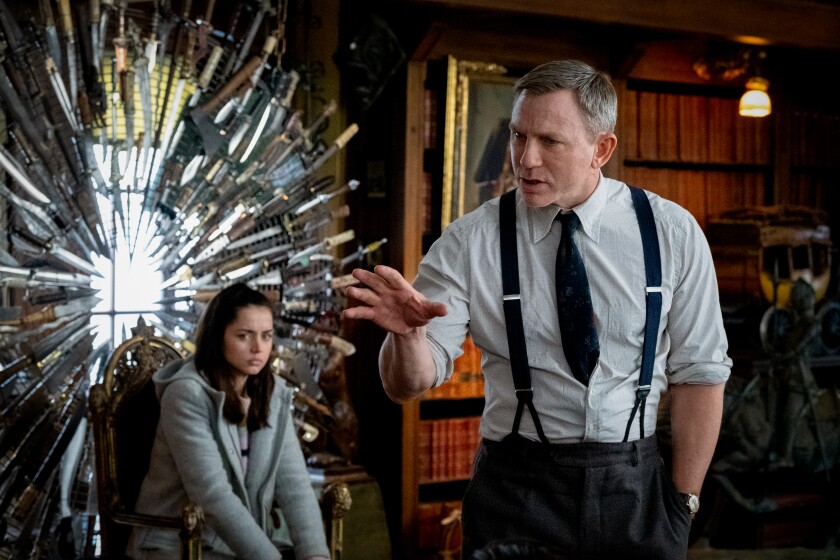 I used to think Daniel Craig should do a comedy, and it certainly looked like he was having a whooping good time camping it up as our outlandishly Southern detective. Ransom's put-downs of Blanc as "CSI: KFC" and "Foghorn Leghorn" are quite accurate; as a side note, given his name of "Benoit Blanc", (which I think translates to "Benedict White"), along with his deliberately false Southern tones, my guess is that he's meant to be from Louisiana's Bayou country, but it's hard to say given this is played for laughs.

Having seen Craig in a comedy, I'm now of the mind he isn't funny when he's being deliberate on it. Then again, Knives Out is not meant to be totally serious, so perhaps I'm being too harsh.

The only thing on which Knives Out appears to be serious is on the issue of immigration. Marta has an undocumented mother and sister, which is the sword held over her by some of the Thrombey family members. The family can never remember which country she's from: they use Ecuador, Uruguay and Paraguay interchangeably. Time is wasted on discussions of Trump, which doesn't add anything and could have been removed to make Knives Out shorter. The only time the "politically active" Jacob really says anything political (or anything of note really) is when he angry calls Marta a "dirty anchor baby" when the family is shouting at her at the will reading.

Moreover, while one can see political grandstanding, down to having the immigrant be the only good character versus the evil Anglo characters, to my mind it isn't enough to be outright propaganda.

I've no complaints about the performances, which were all quite good and appropriately played for laughs in a slightly but deliberately exaggerated manner. Still, while I thought it clever, Knives Out isn't as clever and nowhere near as funny as I was led to believe.

Knives Out has a nice, breezy manner and works as light entertainment, but I was not won over as much as others. Hugh'll never know who did it until the end.