I have a tradition where I review a Christmas-related film on this holiday.  Last year I tackled the oft-told tale of Ebenezer Scrooge in what I consider to be the definitive version of A Christmas Carol.  A year prior to that, it was the delightful animated film Arthur Christmas. This year, I opted for one I had never seen before, one that delves into the child's wonderment about Santa Claus, the other Christmas figure.  Prancer is a film where we see things from the child's perspective, and that allows us not just to identify with the main character herself but accept her world, one where Santa Claus is very real.  More on that later.

Jessica (Rebecca Harrell) is a typical eight-year-old who sings loudly and believes in Santa Claus.  She believes because she has to: her mother died and she told Jessica about Santa, and her mother wouldn't lie.  She has been pretty much isolated in her mourning, her father John (Sam Elliot) too busy working to keep the farm going (perhaps to hide his own grief), her brother Steve (John Duda) a bit of a bully, and her best friend Carol (Ariana Richards) being a bit wishy-washy.  Carol tells her she doubts whether Santa is real, and by extension God.  If God isn't real and neither is Heaven, then where is her mother, Jessica reasons?  Jessica and Carol have a friendship that goes up and down.

In any case, Jessica sees signs that Prancer, one of Santa's reindeer, might be in trouble.  She herself is in trouble, for John has decided Jessica needs a woman's touch, and has decided to send her to live with his sister-in-law Sarah (Rutanya Alda).  Jessica is horrified by this and won't go.  Wandering in the forest, she reencounters a wounded reindeer, and decides that it IS Prancer.  She decides to secretly nurse him to health and have him ready for Santa to pick him up before Christmas.

From this, Jessica encounters people who are affected by Jessica's total belief in Santa.  There's the crabby veterinarian Benton (Abe Vigoda), the local rich 'witch' Mrs. McFarland (Cloris Leachman), and a cynical department store Santa (Michael Constantine).  Jessica gives the store Santa a letter, asking him to deliver it to the REAL Santa for her.  It has a picture of Prancer and a note telling Santa where to pick Prancer up.  He's so charmed by it that he gives the note to the local paper, and after it's published, Jessica's family (who except for John were attending Christmas services) were literally the last to know about this.  John's furious about how Jessica has kept Prancer a secret, but opts to sell him, horrifying Jessica.

In the end, Steve helps Jessica try to spring Prancer free, and after she's injured in the attempt, the town goes to her home to sing to her.  John convinces Jessica to go keep her appointment with Santa and tells her he's decided not to send her to Sarah.  Prancer runs free and disappears off a cliff.  What exactly happened?  John and Jessica hear sleigh bells in the distance and a quick streak of light in the sky... 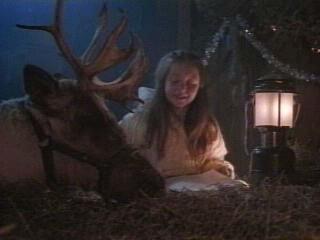 What sells Prancer is to total sincerity.  It is not cynical in any way.  Instead, Prancer treats Jessica's total belief in Santa honestly.  You could argue that her insistence on the reality of Santa is partially a reaction to dealing with her mother's death, but Prancer deals with her child's world view of the reality of Santa realistically.  It isn't hard to believe that a child would believe in Santa Claus and proceed logically.

Jessica isn't dumb.  She for example knows that the Santa at the mall isn't the REAL Santa.  However, she is also innocent in that she believes all store Santas are hired by the REAL Santa to sit in for him and that they have a personal connection to the big guy.

Prancer is intelligent in how it has typical child fears and ideas and doesn't talk them down or mock them, even gently.  Take when Mrs. McFarland comes out to try and chase Carol and Jessica away.  She looks something like a witch, but there is a logic to her appearance (a long coat flowing wildly in the winter).  The visual cues of her as a 'witch' is logical and not overblown.

There's a sweetness, a kindness, an innocence in Prancer that is hard to resist.  It may not be a great stretch to think that Jessica's total sincerity and innocence may melt hearts, but even when tackling familiar motifs Prancer integrates them so well that we hardly notice that the 'little girl changes stone hearts' has been seen before.  The fact that it is integrated and done so well in the story shows how well Prancer works.

Harrell totally sells Jessica as this sweet girl, still haunted by her mother's death, who accepts the reality of Santa as a mere fact of life.  Harrell is so sincere and real, with natural reactions to her arguments with Carol or Steve, her real fear of losing her father, and her total love for Prancer that you soon start not just identifying with her but in a sense believe she is telling the truth.  It's a beautiful performance.

In fact, everyone's performances are wonderful.  Elliot's tearful scene with Harrell when he talks about how important she is to him is beautiful.  Leachman's character starts out as harsh (not evil) but her slow melting is handled well.  The side effect of having Mrs. McFarland attend church and be slightly puzzled by the goings-on (such as when candles are lit) is handled realistically but we can see how the story shows how Jessica's total honesty changes lives.

A great highlight is Maurice Jarre's score, which adds to the childlike, sweet, innocent feel to the film.  Greg Taylor's script is also smart in not making people evil or harsh.  Being sent to Aunt Sarah's is the threat, but Sarah herself is by no means harsh or cruel.  In fact, she's actually kinder and more compassionate than John was.  Similarly, Carol's doubts and Steve's big brother bullying are handled well: in the end Carol and Jessica are still friends, and Steve shows he genuinely loves his sister despite how harsh he's been to her.

We also have an extended comedy scene as John continuously misses both Prancer and the article detailing what has been going on right underneath his nose.  Cut between the shots of Prancer walking behind John as he reads the paper and the church service, where everyone knows about Prancer except for Jessica, Steve, and Sarah (who hadn't read the paper).

Now, Prancer does have a darkness in it.  It is about a girl who has lost her mother, in danger of losing her father, and death is lurking in the shadows.  These themes are handled well and it lends a deeper level to the story than if it were just a mere fantasy about the reality of Santa.

Prancer is about a child's world versus the cynical, harsh reality of adults.  It's a sweet and tender story about the power of belief.   It is a great family film and I think a generally undiscovered Christmas classic.  Prancer is a beautiful film that I think will charm and melt hearts.  It is a great film to see with the family after eating turkey and/or ham, the gifts are opened, and everyone wants to curl up with some cocoa.

In a word, beautiful.