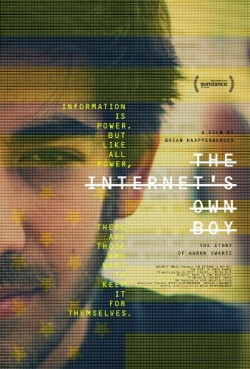 THE INTERNET'S OWN BOY

I am not up on the latest technological advances.  Despite writing for a blog, my knowledge of computers is scant, mostly due to my own lack of desire to learn and delve deeper.  I figure that as such, if I had met Aaron Swartz, the subject of The Internet's Own Boy, he would have been puzzled, maybe infuriated by my willing lack of curiosity on such things.  Swartz had a passion for both computers and free access to information.  That passion and his activities for said passion cost him his life: he committed suicide at age 26, his death the culmination of intense, perhaps fanatical, persecution via prosecution for his activities on behalf of intellectual freedom.  His story, from his early days as a computer wunderkind to the circumstances that led to his death, are covered in The Internet's Own Boy, but what is fascinating is more than just an already fascinating, infuriating, and tragic tale.  Swartz, in life and death, has united so many people, from the far-left to the far-right (judging by the people I've spoken with), and even those who know little to nothing about the World Wide Web will find Aaron Swartz a compelling figure who did not deserve the fate that awaited him.

The Internet's Own Boy chronicles Swartz's extraordinary life.  A child prodigy who could read at 3, he was an amazingly bright and nice Jewish boy who found computers endlessly fascinating.  He created a precursor to Wikipedia (the Fount of All Knowledge as I call it) and believed computers could be used for searching for aliens and curing cancer.  He was a kid after all.

He was essential in creating RSS, which is vital to online activity and Reddit.  However, money was never a motivation for Swartz.  The thirst, the desire for knowledge and for open access to it was his prime motivation.  As time went on he grew more passionate about his politics and on the subject of open access to all information and on copyright on the web.  Of particular concern was the issue of Creative Commons, where instead of having All Rights Reserved to the particular creative force, there are Some Rights Reserved.  This spun into making people pay for information, particularly for access for government information and research papers.  The nadir was PACER, Public Access to Court Electronic Records.   For 'public access', there was a cost, and Swartz believed this to be contrary to law.

Swartz soon became more passionate and more vocal on this and other causes.  This leads to a controversial action where he went into MIT to acquire documents in what could or could not be interpreted as illegal.  As a result the federal government began pushing back.  The high financial costs and the stress of being hounded due to his activities pushed him to kill himself.

As a postscript, Jack Andraka, another wunderkind (in the medical profession), says that thanks to the information Swartz opened up, he could create the pancreatic cancer test that allowed for earlier detection, a step forward against this brutal disease.  If the information had been kept locked up, who knows if this could have happened...or of Andraka would have languished as just another whiny know-it-all kid.

The Internet's Own Boy certainly is very pro-Swartz, but I leave it up to the viewer whether this is a plus or a minus.  It certainly holds Swartz to be almost above reproach, and while he may have been a very good guy who did great things, there wasn't much to find in Swartz that was critical of him.

We do see footage of when Swartz entered the database of MIT, and in fairness the government and MIT consistently declined requests for interviews or comments about the Swartz case.  Therefore, the fact that The Internet's Own Boy appears one-sided is more a product of the circumstances than a deliberate plan of action.

However, I feel that the case is more complicated than presented.  OK, so no one would speak for the other side that was involved directly.  Could no one find anyone who would play 'devil's advocate'?  That is probably The Internet's Own Boy's weakness.  It is too laudatory to Swartz, too eager to make Aaron into a combination the Mahatma Gandhi/Don Quixote.  The man himself may get lost to put in the legend.

Again, this isn't a deal-breaker for me.  I think The Internet's Own Boy is a brilliantly told and tragic tale for every person interested on these various issues of Internet freedom, copyright protection, and the extent of government interference.  It will shock people unaware of how invasive the government has become in people's private lives and the lengths it will go to punish someone who dared to speak out.   It is worth seeing to examine and think on these various issues, though whether people end up thinking The Internet's Own Boy makes Aaron Swartz into a virtual saint is up to the viewer.  Still, what happened to him shouldn't have happened to him.

Questions still remain, and we have a right to search for answers, freely, in every sense of the word.