For those who did see Two-Faced Woman when it came out, the sight of Greta Garbo, a woman who built her whole career and mystique around 'wanting to be alone', dancing gaily to a rhumba beat must have been a bit of a shock.  It certainly was to Time Magazine, whose review was scathing to say the least.  Said Time of the film, "It was almost as shocking as seeing your mother drunk".

That quote happens to be a personal favorite of mine, one I like to use quite often (for example, in my review for the Doctor Who story Death in Heaven Part 2: Death in Heaven, with its flying Cybermen, transgendered Masters, and Cyber-Brigadiers among other scandals).  Well, after all this time I had a chance to see Two-Faced Woman and see for myself whether all the shock was worth it.

What I saw was actors gamely trying their best but with material that really couldn't make things work.  I saw that Garbo could play comedy, but Two-Faced Woman was simply the wrong material for her.  In many ways, Garbo is simply too smart to play this dumb.  It's unfortunate that this was her final film since it is a bad note to end on.  It's also sad that she never made a comeback, but whether she wanted to or not...

Rakish Larry Blake (Melvyn Douglas) spies the lovely ski instructor Karin Borg (Garbo).  She is unimpressed with Larry, but somehow they end up married.  This doesn't sit well with Blake's publishing partner O.O. Miller (Roland Young) or Larry's on/off girl Griselda (Constance Bennett).  Still, they appear very much in love...until Larry, somewhat mercurial, insists business comes first after declaring he wants to retire and live quietly with Karin.  She is both confused and irritated by all this back-and-forth, so while Larry goes back to New York, Karin decides to stay in Idaho.  This pleases Miller who instantly dislikes Karin and her ways.

Well, Karin thinks things better and decides to go to New York and surprise Larry.  However, it's SHE who gets the surprise, as she spies Larry and Griselda at rehearsals for her new play, Nostalgia in Chromium.  Karin wants to get away but is spied by Miller.  With help from Miss Ellis (Ruth Morgan), Karin passes herself off as "Katharine" Borg, Karin's twin sister.

"Katharine" Borg charms Miller, and even Larry is befuddled, but soon gets wind that Katharine and Karin are the same.  He decides to turn the tables and attempt to seduce his 'sister-in-law'.  Eventually the confusion is resolved and Karin and Larry go back to Idaho and find their love stronger. 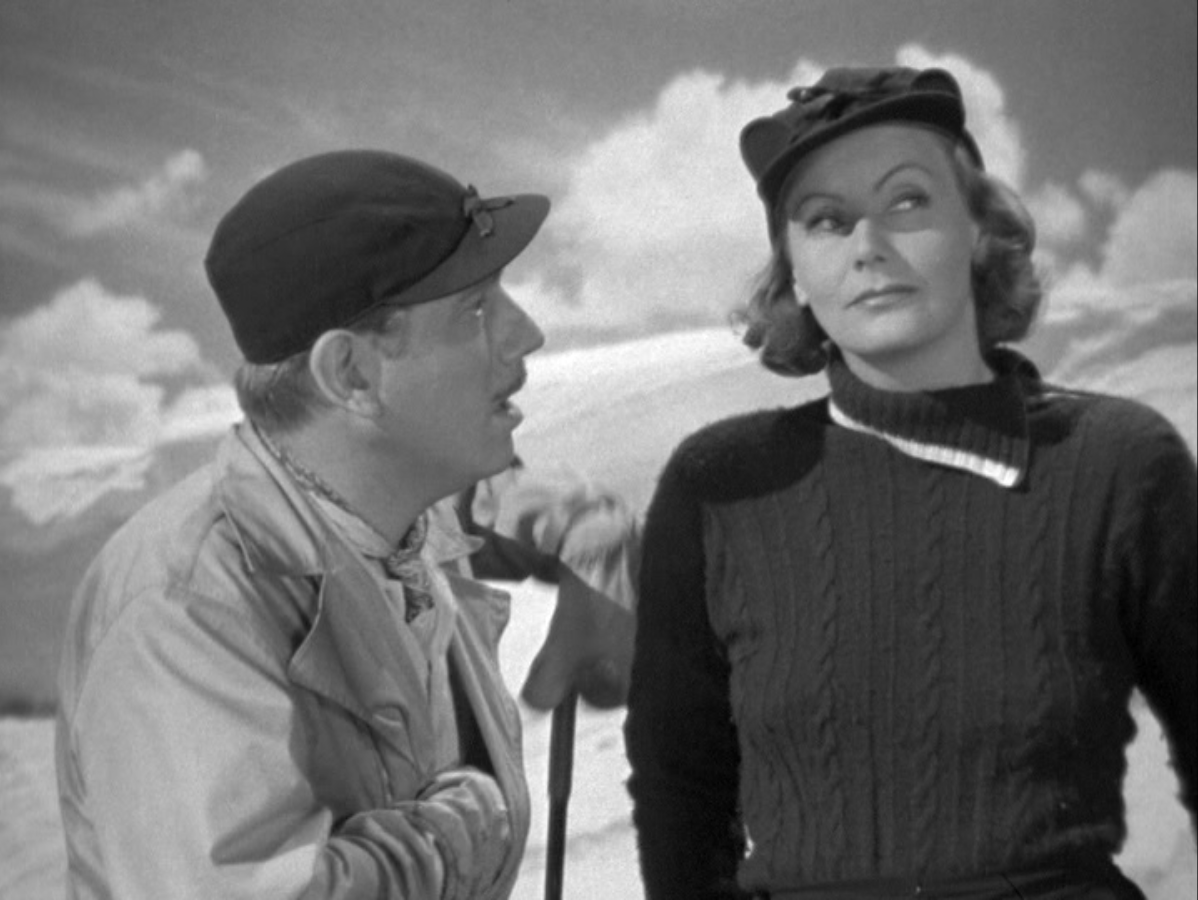 As I watched, I thought Two-Faced Woman would be a great vehicle for Carole Lombard, who was adept at playing somewhat scatterbrained ladies who were also quite witty.  Garbo, as I said, could play comedy, as is evident in Ninotchka.  However, the differences between Ninotchka and Two-Faced Woman were that in the former, Garbo was doing self-aware spoofing of her own image, that she had a witty and clever script to hold her, and the Lubitsch touch where things were classy as well as silly.

Two-Faced Woman didn't have any of that, and given that it was George Cukor who directed, it's more shocking (than seeing your mother drunk) to see how spectacularly Cukor failed.  Take the scene where Griselda learns from Larry that he is married.  Bennett's character screams in frustration at having lost her man and then tries to go back to the phone calmly to wish him congratulations.  Everything in this scene is so forced and broad, that it isn't believable.

That really is Two-Faced Woman's biggest flaw: the comedy is so forced that it becomes too idiotic to believe.  It's suppose to be screwball, but the pacing between the actors was not rapid-fire but almost hesitant, as if no one quite trusted the story.

It wasn't for lack of trying.  Garbo especially looked like she wanted to make it all work, but again, in both her performance and her being she looked, behaved, and acted as is she (and to an extent, Karin) were simply too smart for all this.  Karin was, or should have been, too smart for Larry (and bless Douglas, but no amount of charm could make Larry into anything more than a slightly repulsive cad).  However, the magic that Garbo and Douglas had in Ninotchka failed here, probably because again, the story was simply too much for anyone to really make believable (except, perhaps, Lombard).  About the only person to come out of this was Gordon as Miss Ellis, who seemed to understand that one should either overplay things (as Bennett did) or try to be smarter than the material (Garbo and Douglas).

Perhaps if the story had been reworked to where Garbo is pursued by Douglas and she invents a freewheeling sister to test him and then he was in on it and they go at it with gusto, Two-Faced Woman could have been funnier.  It would have helped to have had Cukor bring a faster pace to the proceedings.

About the only real highlight is the Chico-Choca dance number, which shows that Greta Garbo could cut a rug with the best of them.  Here, things appear to liven up a bit because we aren't concerned with anything other than having fun.

Perhaps if the film had taken THAT route, Garbo could have made more films.

Again, Two-Faced Woman was a nice try, but not even the Great Greta Garbo could make us care about either face.