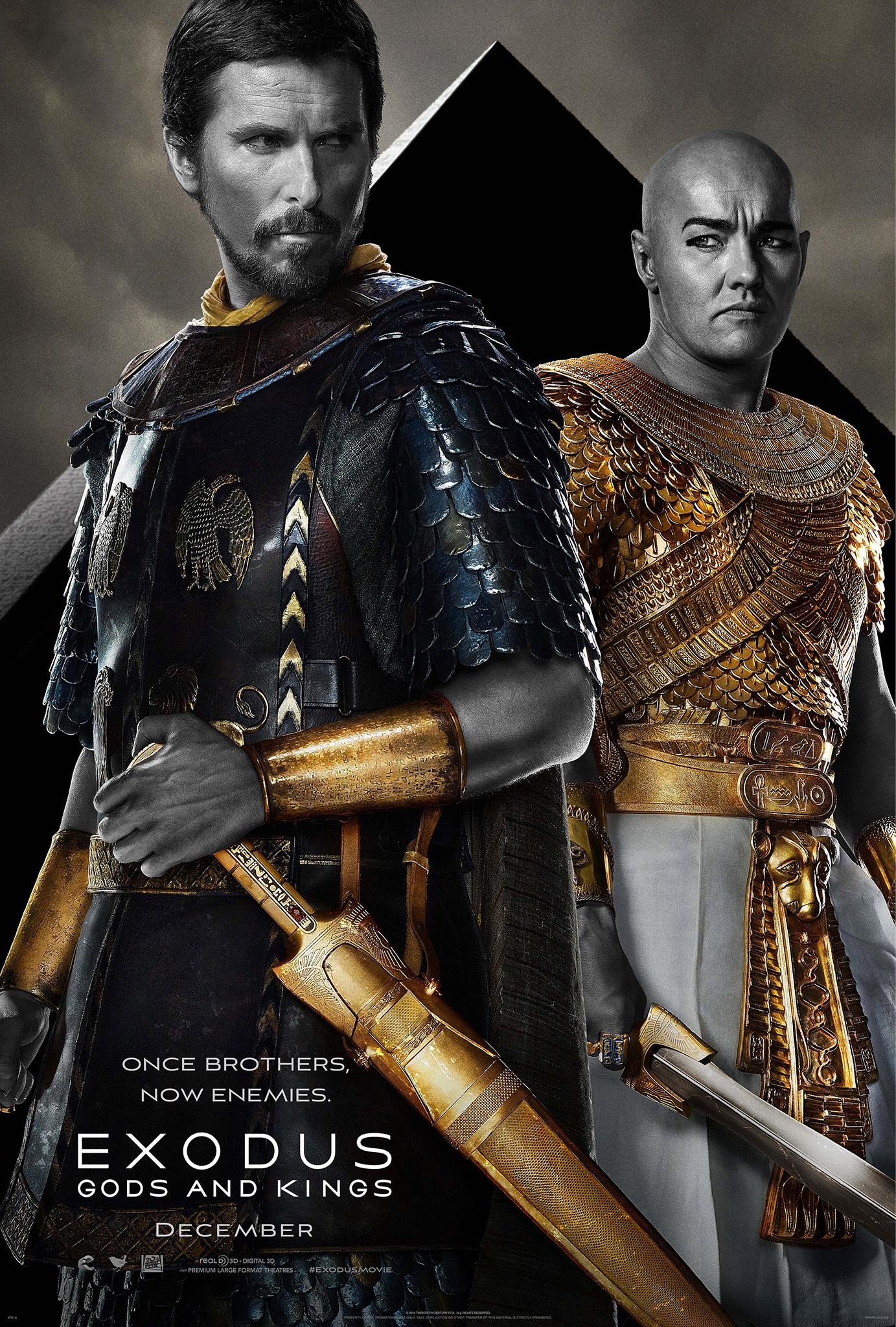 There appears to be genuine fear running rampant in Hollywood.  No, it isn't fear of Kim Jung-Un, or as I lovingly call him, Fat Bastard.  That discussion is for another time.  No, the fear in Hollywood is on a more fearsome deity: the Judeo-Christian God.  Exodus: Gods and Kings is the second Bible-based film released this year.  While Noah was bad, at least it could be enjoyed in a loopy way (and had pretty colors).  Exodus, on the other hand, is simply an absolute disaster: boring, self-important, badly acted, badly written, badly directed.

About the only thing both Exodus and Noah have in common is the absolute determination of the people involved both in front and behind the camera to divorce their films from the source material, as if the idea of 'God' is so foreign that He is apparently in no way connected with any Biblical stories.  Why Hollywood raids Scripture while simultaneously insisting that God plays no part in the Bible stories is again, a topic for another time.  For the moment, let us concentrate on Exodus, a film that feels longer than the Hebrews wandering through Sinai and probably less fun.

Moses (Christian Bale) and Ramses (Joel Edgerton) are Egyptian generals and kin to Pharaoh Seti (John Turturro).  Moses soon either finds or is convinced that he is Hebrew, and is sent into exile after Seti's death and Ramses' ascension to the throne.  Moses finds a home with Zipporah (Maria Valverde), but when climbing a sacred mountain during a storm, a rock slide hits him on the head and he encounters a burning bush, and God (in the form of a child).

Well, it's back to Egypt to free the Hebrews, but Ramses isn't going for that.  He won't negotiate with Moses, even less when Moses and his fellow Israelites turn domestic terrorists. Little Boy God then tells Moses that He'll take over now, and sends the plagues, but Ramses is less hardened and more clueless.  It isn't until the Angel of Death takes the first-born of the Egyptians that Ramses finally throws the Hebrews out.  In a fit of anger, Ramses decides to go after them and wipe them out, but Moses throws his Egyptian sword into the Red Sea and in a while the waters recede, allowing the Hebrews to go.  Despite having lost many men already, Ramses decides to pursue Moses, even if it means going at it alone.  The waters return, and while both Moses and Ramses survive, the Hebrews are beyond the Egyptians' reach.  Moses goes up to the mountains to carve the Ten Commandments, ostensibly under Little Boy God's direction, and we end Exodus with Moses, old, but still with the Hebrews as they wander about.

Exodus: Gods and Kings is credited to four screenwriters, but after watching the film a legitimate question can be raised as to whether any of the four official screenwriters ever bothered to read the Book of Exodus in the Old Testament.  I say this because apart from the names, Exodus itself seemed to come from another world altogether.  Moses never asked Ramses to 'let my people go', he never kills an Egyptian that causes his eventual exile from both Court and Egypt, and Pharaoh, rather than have his heart hardened, appears more inept and dithering, someone who can't seem to figure out that these situations are either supernatural or naturalistic.

Plot ideas introduced in Exodus were either not followed through or dragged on and on.  Joshua at one or two points sees Moses argue apparently with no one, but he never asks Moses about it or tell others, 'Hey, our leader talks to himself a lot. Think we really should be following him?'  Exodus, however, is obsessed with Ramses' dead child, so much so that we get many scenes of Ramses either watching his son sleep or cradling his dead child or burying his dead child.  To me, it looked like director Ridley Scott and whoever ultimately wrote this were more determined to show people "God's bad because He kills babies" rather than say, "Pharaoh's hard heart brought misery to his people and ultimately his own house".  It's easy to blame God, even if He's in the form of a child (which begs the question, which did they think was more logical: a burning bush giving Moses directions, or Moses suffering from hallucinations and perhaps being clinically insane?).

I am not concerned with the casting of white actors in the roles.  I am more concerned with Scott's idiotic decision to give his leads a wide swath of accents that appear to make them sound more ridiculous than the already dull and heavy script they have to read.  Maybe Bale can get away with sounding British, but why does Edgerton start spouting an accent that might be British, might be Australian (it sure ain't American).   Why have them sound so deliberately foreign when they didn't need to?  It's not as if I'm opposed to accents, but there was really no need to have such a variety which only served to draw attention to the fact we were hearing English spoken in a variety of ways.

Turturro's brief role as Seti was probably the worst offender of this, as he appeared to be trying to sound more British than Sir Cedric Hardwick (or at least I THINK he was trying to sound British, because it was unclear whether Turturro even ever fully knew what he was suppose to sound like).


Adding to the overall horror of things was the decision to reduce other actors to almost cameos.  Sigourney Weaver must have loved making Exodus because I figure she was paid millions of dollars for having at most ten lines in the entire film before disappearing, never to be heard from again.  Faring even worse were Aaron Paul and Andrew Tarbet as Joshua and Aaron respectively.  They played virtually no part in the story.  I'm going to walk that back a bit.  They played NO part in the story whatsoever.  We meet Joshua when he's getting a whipping, then Paul decides that in the few scenes he was in, his sole purpose was to look insane.  You seriously could have cut him out of Exodus completely and it would not have affected the film.  Given the major role Joshua has in the Exodus story and that a whole film could be made about his story, it takes an extraordinary filmmaker to remove a major character from a story and reduce him to crazy eyes and bad wig.

Given Aaron Paul's father was a Baptist minister, you'd think at least HE would have heard the Exodus story and be familiar enough to tell the writers, 'this isn't how I remember it...'

Bale had no sense of humor, which isn't a bad thing given the seriousness of the story.  However, he also had no other attributes that would make Moses someone worthy of following: he was not wise (at times appearing genuinely bonkers), he was not kind, he was not pleasant, he was not particularly angry, he was not motivated or motivational.  I've already addressed Edgerton's accent-wandering, but let me delve a bit deeper into Ramses as a character.  His Ramses was basically an idiot.  He seemed almost resigned to be living with the plagues rather than do anything, even rage at anyone.  Edgerton's Ramses never had a hard heart.  However, he never had much of a brain either.  He was more indecisive than enraged, and while you'd think he'd have a great motivation with his dead child (which the film trotted out almost perversely), he seemed to be pursuing Moses more because he had to do something.

And I'll say it: Edgerton's efforts to outdo Elizabeth Taylor's Cleopatra eyeliner does NOT help matters.


Even the parts that SHOULD be exciting (a battle sequence that opens Exodus, and the parting of the Red Sea that closes it) were shockingly dull and lifeless (like that baby Ramses kept showing off). In fact, the Red Sea really didn't even part.  Instead, it kind of just opened up by having the waters recede.  The throwing of the sword did not help.  I seriously expected The Lady of the Lake to emerge with Excalibur raised above the waters, and I'm not kidding...I was actually waiting for that to happen.  Certainly would have livened up a dull film.

Exodus: Gods and Kings is far beyond a mess which takes itself so seriously you really can't help laugh at its own sense of importance.  It's dull, it's lifeless, it has no energy or reason for being.  It strays too far from Scripture to be considered respectful of the three monotheistic religions that hold Moses as a prophet, and not independent enough to be an original take on the original story.

Somewhere, both Charlton Heston and Cecil B. DeMille must be laughing their heads off.