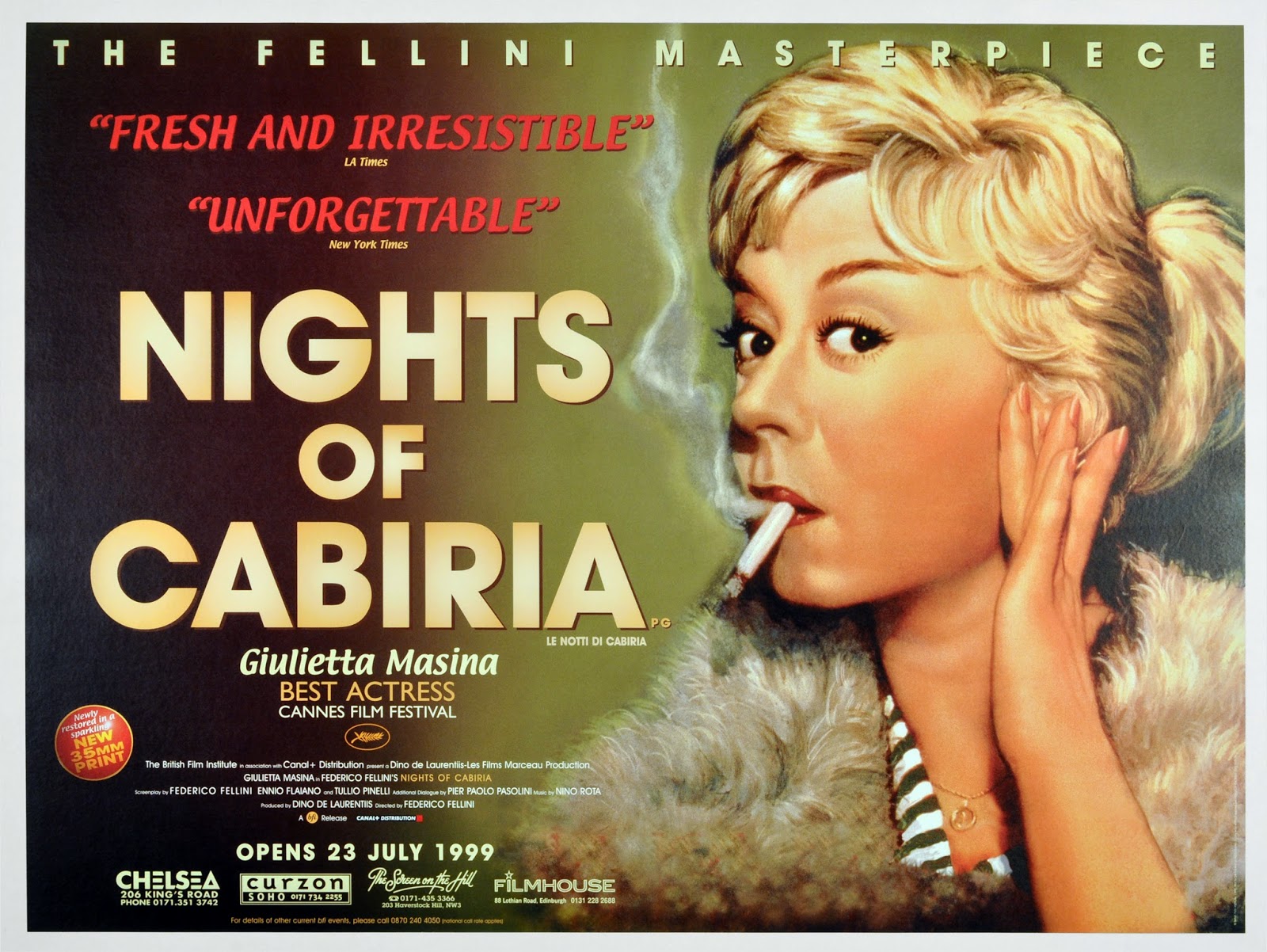 I am a late convert to Federico Fellini. It took two viewing of 8 1/2 to convince me that he was truly an extraordinary filmmaker.  This isn't to say that on a certain level I still am not a die-hard unquestioning fan.  I still hold that probably after Juliet of the Spirits and definitely after Amarcord, Fellini became too self-indulgent in this visual esotericism, too willing to coast on his legend to make real movies in favor of being 'Fellini-esque'.   I came into Nights of Cabiria with less reluctance than I had with 8 1/2, and while I found it had a simply beautiful performance by Guilietta Masina, I also found it almost predictable in how the story was going to go.  Now, granted that might have been Fellini's whole intent, and I was emotionally moved, but I still felt that knowing how it would go kept me a bit removed from it.

Cabiria (Masina) is a happy hooker.  Plying her trade, she takes great pride in owning her own home (even if it is on the outskirts of Rome in an underdeveloped part of the continuously rebuilt city) and despite what life throws at her, she still keeps going.  We start with her boyfriend pushing her into the Tiber and running off with her purse, where she nearly drowns.  She is still mad even after her rescue, and not even her best friend Wanda (Franca Marzi) can get her in a good mood.

One night, she has a chance encounter with Alberto Lazzari (Amadeo Nazzari), a famous movie star who was dumped by his girl in front of her.  Partially out of frustration, partially because he needs someone, he picks Cabiria up and takes her to first a club, then his home.  She seems to perhaps found someone for her to go beyond turning tricks, but just as they are coming to making love, in comes the girlfriend.  Alberto rushes her into the bathroom, where she sleeps until she is able to sneak out with Alberto's help, declining his money.

She then tries to find faith in the Blessed Mother, but that's a bit of a wash when she finds she hasn't changed.  Finally, after taking in a magic show where she was hypnotized to talk about her great dream of marriage, she encounters Oscar D'Onofrio (Francois Perier), an accountant who was in the audience.  He tells her that her treatment on stage was terrible, but that he finds her enchanting.  Soon a lovely romance blossoms.  Oscar the Accountant tells her he loves her and wants to marry her.  Cabiria believes things have turned around at last.  She sells her home, bids a tearful goodbye to Wanda and goes with Oscar, only to find heartbreak, despair, but in the end, some hope... Perhaps it was because at a certain point I sensed that this was not going to be a great romance, that we weren't going to get a true happy ending, that somehow history would repeat itself, that my desire to enjoy Nights of Cabiria ended.  I'm very conflicted about how the story turned out.  Part of me understands that we can't always have a 'happy ending', and that tragedy is part of life.

Part of me, however, so desperately wished that Oscar had turned out to be a genuinely decent man, or at least one that in the end, could not go through with the terrible plan he contemplated (pushing her off a cliff, which he didn't) and chose (taking the purse with her life savings, which he did).   It wasn't just because I happened to like Cabiria as a person: her sincerity, her unapologetic joie de vivre despite everything, or the fact that she longed for things prostitutes don't ever get: a happy home life as a wife and mother.   I WANTED a real happy ending for Cabiria, and perhaps Nights of Cabiria gave her something like that, as she found herself walking among revelers and smiling through her tears.

However, I found the whole thing sad, predictable, and so unfair.

It brought to mind what my mother said about another Italian film, Life is Beautiful.  SPOILER ALERT.  Couldn't they let the father LIVE?, she asked.  Similarly I asked, 'couldn't she find real happiness?'  Why condemn such a nice, sweet person to such sadness?  It seems almost cruel, and while I figure that was the point I still felt quite bad.

I admire the beauty in Nights of Cabiria.  I admire Guilietta Masina's beautiful performance of our naïve hooker, who still finds joy in almost all situations, who still believes in love, who is at times prickly and unpleasant but who still wants to make her mamma proud.   Masina gives one of the most heartfelt and sincerest performances as Cabiria, this good girl in a bad world, whom you like and learn to love, whom you want to protect and make happy.

I admire the visual beauty in it, like when "Satan" leads her onto the stage for her to reveal her innermost hopes, or in the frenzy at the pilgrimage, or in the encounter she has with a man who feeds the homeless of Rome, living in caves.  I admire how Fellini led us to, if briefly, imagine the romance between the prostitute and meek accountant could possibly be real and true.  Yes, Fellini was a master, not just of the fantastical, but also of the Neo-Realism that the Italians were creating.

I found much to admire in Nights of Cabiria. It's certainly a beautiful film.  However, I could never get over whether or not I was suppose to know that Cabiria's nights were going to end in the cold light of day.  I am so conflicted on that that I could not bring myself to make it for me a true masterpiece.  I'm sure others will argue that it is, and I won't argue back.  However, I wish Cabiria could have had what she so longed for...