Get On Up: A Review Chadwick Boseman has become to go-to man for biopics on famous African-American men.  He had a spectacular turn as Jackie Robinson in 42, and now he's gone from the baseball icon to The Hardest Working Man in Show Business with Get On Up, the biopic of The Godfather of Soul, Mr. James Brown.   The movie itself I thought a bit of a jumble, never sure of which direction it wanted to go.  However, Boseman is the real reason to stick through the somewhat confused story of Soul Brother Number One, for he's so above the material and works hard to get not just the voice of Brown but also his brilliance, his ego, and his own demons.

Get On Up hops about Brown's life with gleeful abandon, starting and not quite ending in 1988 where Brown leads Augusta and Georgia police on a wild chase after he pulls out a shotgun and terrorizes his employees at a meeting after finding someone used his private bathroom.  Between that, Get On Up bounces from his early years with a mother who left him to turn tricks, a father who abused him and left to join the Army, leaving his child and a donkey with Aunt Honey (Octavia Spenser), madam of a whorehouse.  James, now called Little Junior (owing to there being a Big Junior already at the brothel) helps procure customers, and we find he has a great voice.

He also has a stint in jail, imprisoned for stealing a suit.  In prison, he hears a gospel choir headed by Bobby Byrd (Nelsan Ellis) and they become fast friends.  James joins the choir but soon the siren call of the Devil's music gets to him.  James, taking the liberty of renaming the group The Famous Flames, even manages to show up an up-and-comer called Little Richard (Brandon Smith).  From here, we go through so many moments in Brown's life: wife-abusing, alienating his band with his fines for infractions large or small, his penchant for referring to himself in the third person, with Bobby ever loyal through it all, until after a concert in Paris, James' rather flippant regards towards Bobby's own album was too much for him and walks away.  They do reconcile, and we're told that Byrd on occasion would perform with Brown, who kept working until his seventies. 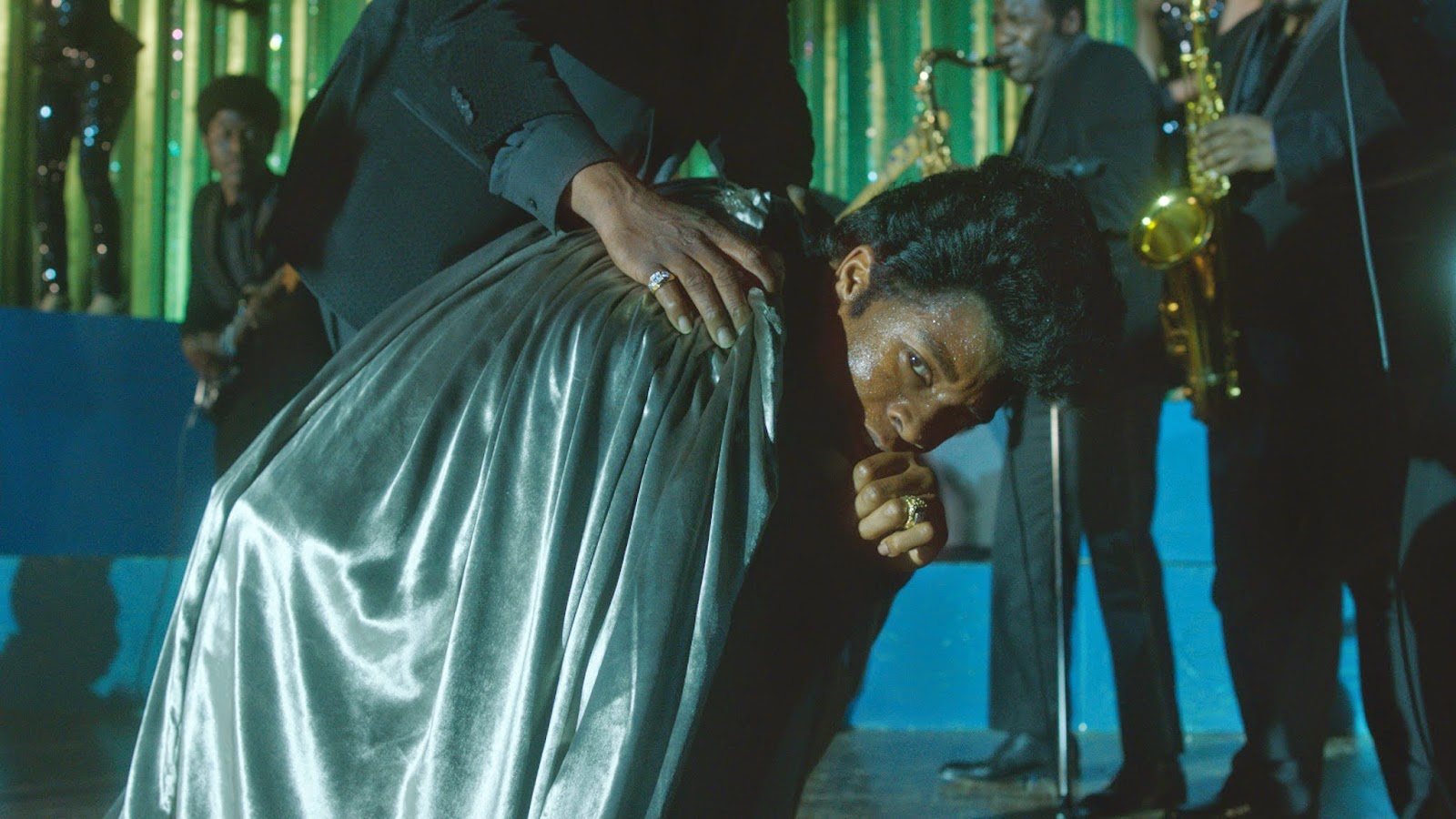 James Brown was two things: a larger-than life figure and one of the greatest musicians/performers America produced.  Brown is still sampled and imitated today, and as a true innovator of funk Brown set the groundwork to all sorts of music today.  As such, his story should be one that is fascinating, enlightening, thrilling, and moving.  Get On Up isn't that type of movie.   The reason for this is simple: Get On Up is trying too hard to be more than what it should be: a well-planned and thought-out biopic.

Instead, it indulges too freely in spinning from one point to another and worse, leaving things in a somewhat frustrating limbo.  Take when after a triumphant show at the Apollo Theater in Harlem, comes his mother Susie (Viola Davis).  She appears briefly in a section detailed as "1962: Mr. Dynamite" (the titles on screen made me think of a biography rather than biographical film), then we go into the future and the film keeps going and going until we somehow wander back to their reunion, where things sort of get resolved between them and then she goes, never to be seen again.  Same for Aunt Honey, where after some time she returns when we get a flashback that never quite flows from where we started.

Again and again Get On Up makes strange choices, partially in an effort to be more artistic than it should be.  The moment I remember that shows Tate Taylor's yen for this kind of nuttiness is when at the end of the wild police chase, it's Little Junior that exits the truck.  Get On Up simply doesn't need these kinds of obvious tricks.  Another particularly bizarre moment is when we flashback to when Brown is made to participate at the Augusta Country Club Battle Royale as a child, where the white club members make a group of little black boys box blindfolded with one arm literally tied behind their backs. This scene could have been impactful and powerful, but instead it veered into the weird when the jazz band playing during the boxing match suddenly began slipping into funk music.

Jez and John-Henry Butterworth's screenplay (from a story by the Butterworths and Steven Baigleman) can't resist these flourishes, and those push Get On Up down.  Even that wouldn't be so bad if it were a bit consistent: sometimes Brown addresses us, sometimes he seems to forget he's suppose to. 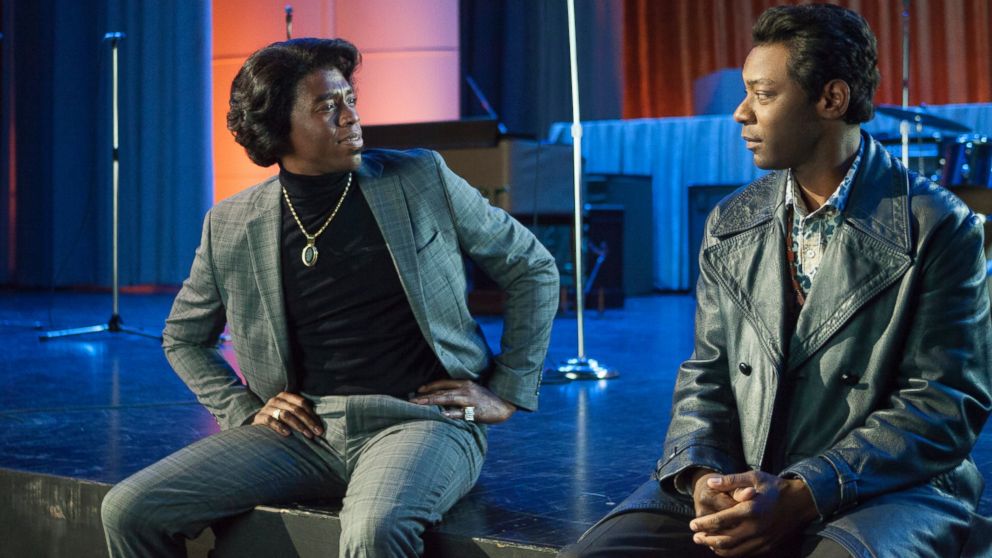 The only real saving graces, and the thing that keeps Get On Up from totally collapsing is the double-act of Boseman and Ellis.  From their first scene together they play well off against each other to where one can believe they are true lifelong friends despite Brown's idiosyncrasies.  Boseman has the harder part because he's playing the more famous Brown, and he does capture both the speaking voice and sense of greatness (real and imagined).  Ellis, for his part, sees who Brown is and loves him all the same.

From the get-go Get On Up is disjointed with only a few real moments of strong filmmaking; the best moment is at the Boston concert sequence the night after the Martin Luther King, Jr. assassination, where the already agitated audience was gearing up for a big Brown show.  This scene had genuine tension as to how the almost all African-American audience would react to the white police providing protection and as to how Brown would keep control.  Other parts, like the death of his son Teddy, sadly didn't and shouldn't.

Still, as a good primer on the legend and genius that was James Brown, and as yet another example of how good Chadwick Boseman is an actor (and as a bonus, seeing Nelsan Ellis show what he can do), Get On Up is barely passable.

Get down with your bad self, Mr. Dynamite...