A Madea Christmas: A Review 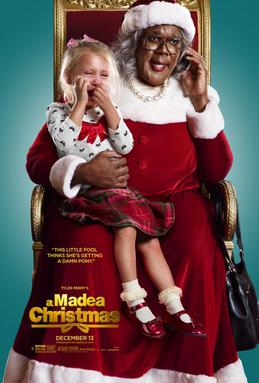 Welcome to Rick's Café Texan's annual Christmas film review, where on the day we commemorate the Birth of Christ, we examine a Christmas-centered film.  This year, I've selected A Madea Christmas, starring Tyler Perry as the blunt, gun-toting wisdom-spouting black woman who tells it as it is.  In that same spirit, I will do the same with this review.

A Madea Christmas has a Christmas setting, but apart from a minor subplot the film could have been set at any time.  In retrospect, it is not a good film (certainly not in the same league as one of his best Madea-centered films, Diary of a Mad Black Woman), but as mindless Yuletide fare, this isn't the worst you could choose.

Madea (Perry) gets talked into working as a department store guide for Christmas by her friend/great-niece Eileen (Anna Marie Horsford), complete with a "Mrs. Claus" wardrobe.  No surprise: Madea fails spectacularly in her one day of work.  She ignores customers asking for assistance, takes personal calls while on the floor, and talks badly to just about anyone who comes her way.  She suggests to one customer that she is too fat for lingerie and leaves another in the middle of her inquiry to take her break.  No surprise that she's fired, but no matter: Madea expects to be paid for her hard work instantly.  When she isn't, she boldly goes to the register, takes out what she thinks she's owed, and takes a dress without paying as part of her 'salary' before storming out of the department store, horrifying everyone including Eileen.

Eileen, a hypochondriac, is upset that her daughter Lacey (Tiki Sumpter) isn't coming home to Atlanta from her teaching job at a small Alabama town for Christmas.  Madea suggests it's to get away from her overbearing mother, but Eileen won't believe that.  However, a chance to surprise her comes her way when Oliver (JR Lemon), an old boyfriend of Lacey's, is going to see her.  Lacey has asked for his help.  Her school is facing a financial crisis that might cancel the Christmas Jubilee celebration, and Oliver's PR firm is handling a mysterious client that needs good publicity.  This client is offering a $10,000 sponsorship in exchange for good publicity, and Lacey and the City Council eagerly accept.

Lacey doesn't want to come home for Christmas for another reason.  Eileen is displeased that Lacey lets her farmhand Conner (Eric Lively) live with her.  What she doesn't know is that Lacey and Conner are secretly married.  Oh, and did I mention Conner is white?


Lacey doesn't want to tell her mother, and the very gentle Conner goes along with this ruse.  However, Conner's parents Buddy and Kim Williams (Larry the Cable Guy and Kathy Najimy) do know, and in fact are coming back to the family farm to visit for Christmas.  Lacey and Conner also have to deal with their own work issues.  For Lacey, that is helping Bailey (Noah Urrea), a poor farmer's son, overcome bullying and achieve more than the life his father Tanner (Chad Michael Murray) wants.  For Conner, that means working on a new corn that requires less water while being bullied by his old frenemy (the same Tanner).

Well, as can be expected, once Eileen, Madea, and Oliver come around slowly but surely things are revealed.  Madea, perceptive as ever, realizes Lacey and Conner are involved, but isn't aware they are married until Buddy sets her right.  Through implausible circumstances Eileen is convinced the sweet-natured Buddy and Kim are Ku Klux Klan members and is unbearably horrid with them.  Once the truth about Lacey and Conner comes out, Eileen is enraged and won't stay there.  More circumstances bring Eileen to save Tanner, who has gotten Lacey fired (thus getting rid of his son's favorite teacher) because she inadvertently got Sheldon Construction to a.) sponsor the festival which they want all references to Christ removed, down to changing the event from a "Christmas" to a "Holiday" Jubilee, and b.) built the dam that caused the drought for the farmers.  It's up to Madea and her brand of tough love to sort all this out.

What is curious about A Madea Christmas is how essentially unimportant the Christmas setting is to the overall story.  There is a little bit tacked on about a Christmas Jubilee in town about to be degraded to a mere "Holiday Jubilee" but on the whole A Madea Christmas has fewer laughs and less...charm than other Madea films because she is more wisecracking bystander than the dispenser of tough love.  Moreover, what was once charming, even amusing about Madea in other films has turned into a meanness and pettiness that is more cringe-inducing than laugh-inducing.

Madea comes across as a nasty bitch more than a blunt but wise elder.  The way she is with the customers isn't funny, it's downright unpleasant.  If the customers had been nasty, short-tempered, or rude, having Madea respond in kind would have been funny.  However, the two people who dared bother Madea were quite pleasant and nice and rational.  Asking a guide for help in locating a watch is not an irrational request, but Madea behaves as though they have interrupted something more important (her calling for lottery tickets).  Madea then leaves them in midsentence while she storms off, screaming about her break and is oblivious to being called rude as she pushes her way towards the staff area.

It makes Madea someone you don't want to be around, and why Perry opted to do make his most famous character into a horrible figure in the opening I can't say.  It also doesn't help that Eileen is both unsympathetic and stupid.  She is perpetually nasty and rude to all the Williamses right to their face.  A bully in her own right, she is unconcerned that she took down a tree Kim planted as a memorial to her late father to make into a Christmas tree that no one in the household asked to have there.  Moreover, she doesn't even bother to remember Conner's name, let alone use it, referring to him as the farmhand (don't remember is she called him a field hand, but it wouldn't surprise me).

In other aspects, A Madea Christmas is badly structured.  We get a reason as to Eileen's hostility (her husband was killed by a white man on Christmas) only to have this sudden piece of information torn down immediately (Madea telling everyone Lacey's father wasn't dead when he disappeared but instead merely run off with a white woman).  Why didn't Perry introduce this element in the beginning?  If he had, we would have had at least an understanding over Eileen's hostility to the Williamses, which would have made some sense.  Instead, we get this 'shocking' information thrown at us real quickly, then get opposite information negating all this immediately after.

It's just a mess.

The last-minute "have to save Christmas" subplot seems to come from another film altogether, and again and again circumstances and situations are rather implausible if not impossible.  Eileen's unwavering belief in the KKK membership of Buddy and Kim (who are actually quite happy with their daughter-in-law), Eileen coming across Tanner's overturned truck, Oliver's company having to keep their name and motives secret until after the contracts are signed (making this City Council more stupid than the one in El Paso...and that's saying quite a lot).

Implausible upon implausible makes things worse than they already are.

Now, it isn't as if there aren't some funny moments.  Seeing the redneck styling of Larry the Cable Guy (whom I admit to liking) with the blunt chitlin' circuit comedy of Tyler Perry's Madea has some good moments (a plug for Prilosec OTC by Buddy is a nice in-joke, if a bit obvious).  A few moments (such as when Madea inadvertently crashes a KKK meeting or shouts out "I'm Gone With the Wind fabulous" in her department store tirade) are funny.

It's a pity that even in parts where the comedy could work, Perry as director/writer chose to trim them.  The scene where Madea attempts to explain the Nativity story of the Virgin Mary...J. Blige and Joe....Mangianello ending with her tying up the little snobbish girl to a cross with Christmas lights had potential but no payoff.  Same for the KKK meeting.

In terms of performance, I think professionals like Najimy tried their best and came away the least scathed.  Urrea too as the kind, smart, and talented Bailey under a somewhat abusive father also was a highlight.  However, when Larry the Cable Guy can be seen as one of the better performances, you are in deep trouble.  Sumpter was almost always so blank and Lively came across less as a gentle, kind man, and more as a wimp.  Murray's one-note performance as the villain says it all, and even seeing Lisa Whelchel (Blair from The Facts of Life) as the school director didn't help make this an enjoyable romp.

A Madea Christmas is a bit of a lump of coal for the holidays.  A few moments of actual humor came across almost by accident.  Terrible characters, terrible performances, and little connection to the holidays makes this a rather poor choice for a holiday feature.  Still, I can't say I hated it or that it is completely horrible.