The Librarians: And the Cost of Education Review 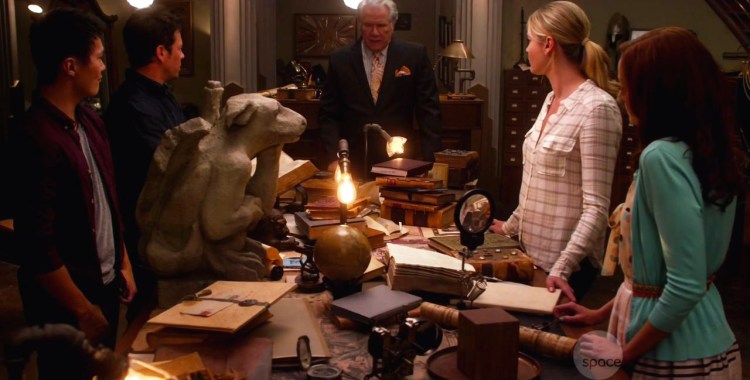 THE LIBRARIANS:
AND THE COST OF EDUCATION

I don't know whether the fact that I just finished my Master's in Library Science makes me a bit wary of And the Cost of Education.   So far, I don't think there's been a bad Librarians episode.  And the Cost of Education wasn't bad, but I still couldn't shake off the idea that on this one, they were trying too hard to be funny instead of letting the situation play out.

The librarians investigate the disappearance of Peter, the Wexler University mascot who vanished while in his Otter costume on his way to a frat-house party.  Wexler was founded by Josiah Wexler, who was an occultist.  Everything about Wexler is occult-centered: the geography forms a pentagram, the buildings have occult symbols, even the motto/cheer seems to be some sort of incantation.  We find out later that none other than bon vivant H.G. Lovecraft used Wexler as the model for his Miskatonic University (and by the way, 'bon vivant' is a joke in case you didn't know, for there's a reason something can be described as "Lovecraftian").

Into the mix comes Lucy Lyons (Kasha Kropinski), a Wexler student who is similarly investigating the role of magic at Wexler.  She too is on the hunt for the disappeared mascot and suspects magic is involved.  The Librarians have split into two groups: Cassandra (Lindy Booth) and Jones (John Kim) investigate the frat house, while Baird (Rebecca Romijn) and Stone (Christian Kane) talk to Professor Bancroft (Bob Pescovitz), the leading authority on Colonial American architecture of whom Stone is a big fan of.  Professor Bancroft happens to be doing a semester at Wexler and is also looking at the architecture.  Stone's fanboy love for Bancroft erodes when they get into an argument about the school architecture and the existence of magic, devolving to Bancroft calling Stone a "conspiracy theorist dilettante", which infuriates our country boy.  This display of ego, however, reveals the monster at the heart of the school, a tentacle sweeping the egoistic professor into another dimension.

We discover that Lucy's experiments in particle accelerators (generously supported by the Lake Foundation) has released the monster that feeds off displays of hubris.  Cassandra, who has grown close to Lucy, urges her to drop the experiments and Baird insists on letting the Librarians do the heavy lifting.   Jenkins (John Larroquette) for his part thinks Lucy is nothing but a meddling amateur, causing a split between him and Cassandra.  Baird insists both are wrong: amateurs cannot get involved in dealing with magic due to their lack of training, but Jenkins can't keep insisting on pushing everything under the surface every time something does happen.  Lucy's stubbornness on the issue brings out her own ego, and she is taken.

Cassandra is devastated and determined to go and try to save her.  Baird and Jenkins both vehemently oppose the idea, but Cassandra insists there is a difference between doing what's best and doing what's right.  She has a plan, and the Librarians agree.  Using Jones' massive ego as a lure to distract the monster, Cassandra plunges into the other dimension, with instructions to Baird to close the portal in case the monster comes close to fully emerging (a high possibility given the impending pep rally where tiny Wexler University thinks it can beat Michigan at a football game).  In the other dimension, Cassandra does find and rescue Lucy, but as they flee Cassandra falls and is nearly devoured herself.  She is rescued at the last minute by a beautiful woman beneath a lake (hence, the Lake Foundation).  The lady of the lake (Beth Riesgraf) invites Cassandra to join them, these women who have united science and magic.  Cassandra declines, but the lady of the lake (I'm reluctant to think she is THE Lady of the Lake, though given Jenkins is Galahad, anything's possible) tells her the offer still stands.  Back at the Library, Cassandra and Jenkins don't see eye to eye on the Lake Foundation's offer.

Perhaps it is me, but I felt And the Cost of Education had a bit of a downbeat ending.  Rather than be a joyful affair, it made things a bit sad.  There's nothing wrong with having our characters grow, but I can't remember when a Librarians episode ended with a sense of somberness.

There was a lot to like in And the Cost of Education.  Kane had good comedy when he found himself super-excited at meeting Bancroft (a nod to fans getting equally excited about meeting him, perhaps?) and we got to hear what I figure is now Stone's catchphrase ("Architecture is art that we live in").  He and Kim form a great double-act when getting the monster to chase them (Kane mocking Kim's Australian accent, Kim giving as good as he gets when he suggests HE is a better singer than Stone, an in-joke on Kane's second career as a singer--though I don't think Stone has actually sung on The Librarians as of yet).  Romijn and Booth handled the dramatic scenes quite well, giving us real moments of emotion between their two differing views.

We even had a long funny moment when Lucy, Jones, and Cassandra went to the basement to see 'Satanic rites' of the fraternity...only to end up discovering it was an invocation to play beer pong.  The turn of events made it all the more funny.

Guest star Kropinski was wonderful as Lucy.  She was a bit bumbling but also sincere in her horror at having inadvertently unleashed a devouring monster and raging at the thought of cutting her investigation/experimentation short.  Her scenes with Booth were also quite effective. I figure there is a chance for her to make a return appearance (a Library page, perhaps), so another return for Lucy would be both plausible and welcome.

Finally, the scenes of both the other dimension and under the lake (a little Doctor Who reference there) were beautifully shot.

However, I think part of my issue with And the Cost of Education comes with Stumpy, the gargoyle that 'adopts' Jones and which Jones becomes attached to.  I wasn't convinced that Jones was really fond of Stumpy and this whole bit to me felt both overlong and unreal, as if they were trying to force laughter out of the situation.  I can see why they did: seeing the egocentric Jones get a 'pet' is a nice idea, but somehow I don't think it played out as well as it could have.  It was again as if they were trying too hard to be funny when perhaps taking things down a notch would have helped.

That part felt a bit flat for me, and at times, the extended chase of the monster with Jones' ego as bait felt a little extended too (and a bit forced).  That brought down the episode a bit down for me.

Again, not horrible but not as funny as it could  have been.

What can I say?  And the Cost of Education left me a bit Stumpy.

Next Episode: And the Hollow Men
Posted by Rick at 6:35 AM