Young Sherlock: The Mystery of the Manor House Miniseries YOUNG SHERLOCK:
THE MYSTERY OF THE MANOR HOUSE

Despite his legendary status as one of the greatest literary characters ever created, the model for all other detectives in literature, as far as I know Sir Arthur Conan Doyle didn't delve into Sherlock Holmes' early years.  I'm sure there are many extra-Canon works that do concentrate on young Sherlock's early years, but apart from the film Young Sherlock Holmes I couldn't think of any.  At least, until now.  Young Sherlock: The Mystery of the Manor House is a Sherlock Holmes adaptation that I had never heard of.  Produced by Granada Television, the same network that produced the iconic (and in my view, definitive) Sherlock Holmes adaptation with the late great Jeremy Brett RIP, this eight-episode series tells of The Great Detective's very first case.

It is by no means a great beginning.  The story has perhaps one of the most unoriginal titles a Holmes story has ever been given and the story both drags and is stretched out.  However, with a pretty good performance by Guy Henry and the young Holmes, The Mystery of the Manor House makes for interesting albeit long viewing.

November 1871.  Seventeen-year old Sherlock Holmes (Henry) is sent home early from his boarding school early due to a typhoid outbreak.  When he arrives at his family home, he is surprised to find that the Holmes Family is not in their traditional home and that a new family is in residence.  Moreover, this family has no interest in having someone snoop around, and Sherlock is unceremoniously chased out by one of their hounds of a sneering young man.   Sherlock flees for his life and on the road finds his Uncle Gideon (John Fraser).  Uncle Gideon fills Sherlock in on the sorry details: his father is facing financial ruin and so he and Mrs. Holmes fled the country to take refuge in France.  None of this though, was communicated to Sherlock.

Uncle Gideon is related to Holmes by marriage, he being the bachelor brother of Rachel (Heather Chasen), who married into the Holmes family and has a daughter, Charity (Eva Griffin).  Aunt Rachel, a snobbish and difficult woman, finds Sherlock a difficult person.  Sherlock finds his Cousin Charity anything but.  He does have friends though: the housekeeper Mrs. Cunliffe (Jane Low), who is engaged to a railroad conductor named Tom Hudson (one guess who she turns out to be).  There is also the old Doctor Sowerbutts (David Futcher), his daughter Charlotte (Zuleika Robson), and his son-in-law, Dr. John Whitney (Tom Brierley).  They form an informal family to the young Sherlock.

The mystery of the manor house really begins with the death of Natty Dan (Davy Kaye), a local bum who makes the rounds of the region as an itinerant storyteller.  His tall tales and gossip provides him some income and he is generally liked by the citizens of the area, so his death is surprising.  He dies after having been invited by the reclusive new owners of the Holmes home, Colonel Turnbull (Donald Douglas), his ill wife Mrs. Turnbull (June Barry), and their nephew, Jasper Moran (Christopher Villiers).  Along with their chief Indian servant Ranjeet (Lewis Flander), they form suspects in Holmes' mind, convinced that Natty Dan's death was not natural but murder.

Still, who would want to murder Natty Dan, and why?  Holmes soon discovers that the Turnbulls are not who they claim they are.  Colonel Turnbull is involved in a very elaborate plan which involves his 'wife' to impersonate none other than Queen Victoria herself.  Holmes ropes in a very reluctant Dr. Whitney into helping him investigate the case, putting them constantly in danger.

At first, it is believed their plan is to assassinate the Queen through the use of a poison from India (Natty Dan's death being a 'test run'), but as the investigation stumbles on they discover that they plan to only cause Her Majesty to take ill and steal the Koh-I-Noor Diamond.  It involved the Indian prince who had I think been hoodwinked into thinking it would be returned to him but was really going to be kept by the mastermind of all this, a certain Professor Moriarty.

Once the plot is foiled, the Turnbulls apparently have fled, but to everyone's surprise they call on their neighbors.  A bomb underneath their carriage nearly kills them, and it's only Uncle Gideon's flirting with Mrs. Turnbull that saves their lives.  Mrs. Turnbull then turns state's evidence: she is an actress known for her mimicry, and she herself had been tricked into thinking this plan was by orders of Prime Minister Gladstone to save Her Majesty.  Jasper Moran captures but does not kill Holmes, promising revenge before fleeing to India to join his brother, Sebastian Moran.  The people involved in saving Her Majesty receive an audience with Vicky, and Holmes, who has been narrating this story via Dictaphone recordings to Dr. Watson after Holmes' death, now begins his career as the detective.

Young Sherlock has potential, but somehow Gerald Frow's story takes its pretty time getting anywhere.  One can forgive the first one or two episodes feeling stretched out since we do need time to set up our story and introduce our characters.  However, the eight episodes (The Young Master, The Gypsy Calls Again, The Riddle of the Dummies, A Singular Thorn, The Woman in Black, The Glasscutter's Hand, The Unexpected Visitors, and The Eye of the Peacock) at times feel as though Frow had been ordered to make things longer.

As a side note, a few of those titles could have served as better ones to The Mystery of The Manor House, which is a really boring title (reminding me of a story I wrote when I was in middle school, the equally unimaginative and ultimately nonsensical Murder at the Mansion).  Then again, given how direct Holmes was and his own disdain for the 'romanticism' Watson gave his stories, perhaps the unoriginal title seems to be apropos.

The Eye of the Peacock for example, takes place after the crime has been solved.  It is nice to see The Queen receive the group (and chide Holmes for his lack of humility) but one wonders why Moran doesn't just kill Holmes instead of bizarrely tying him up to a tree and leaving him there.

As a story, The Mystery of the Manor House at times feels almost convoluted and bizarre.  Holmes and Whitney are treated to a rather convenient dress rehearsal to how the villains were going to grab Queen Victoria.  The various escapes and foiled escapes and captures and tortures were almost Bond-like.  However, those interested in Canon have some nice treats, such as the beginning of Holmes' relationship with Mrs. Hudson or how he tangled with Moriarty and Moran very early in his career. 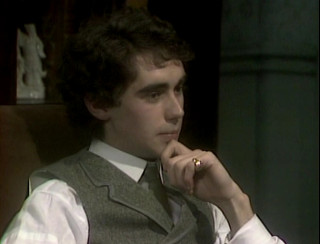 It does make one wonder exactly how old Moran and Moriarty are given Holmes' youth, but we are in a forgiving mood.

Still, despite these flaws, I cannot fault Guy Henry's interpretation of the young Sherlock Holmes.  At 22 playing 17 (not a major stretch), Henry's Holmes is inquisitive, disinterested in obstacles, but one with much to learn.  In short, a typical 17-year-old.  His curious mind and taste for adventure get a solid outing in Henry's performance, where his Holmes is shown to be bright but not completely knowledgeable (he does have to go to Whitney or Sowerbutts to help him understand certain things).

One thing that is probably unintentional is how this Holmes literally towers over everyone.  At 6'4" Henry looms large over just about everyone (the sight of 5'10" Villiers straining to intimidate a young man a half foot taller being almost comical).  I don't know whether Henry's height can be interpreted as how Holmes looms large over everyone, but it is fascinating to watch how Henry overwhelms everyone just by standing next to them.

Henry is actually the best thing about Young Sherlock, with a strong performance that makes Sherlock if not relatable at least less of the cold, logical thinking machine that he would become. Villiers is in full villain mode, sneering it up to the hilt.  When in Episode Four as part of Holmes' investigation (in disguise as a Scottish photographer) he is asked to smile, it is genuinely comical.  The fact that the disguised Holmes, with his exaggerated Scottish brogue, calls him "Mr. Moron" lends a cheeky touch (the youthful Holmes unable to resist a pun).

Barry was quite good as Mrs. Turnbull, especially since she had to play various parts (the ill Mrs. Turnbull, the Cockney actress, and The Queen).  Chasen and Fraser were a bit of the comic relief as Aunt Rachel and Uncle Gideon (Fraser especially as the constantly hungry Gideon, who was almost always seen eating and at one point with food crumbs still on his face, embarrassing his haughty sister who always called him "Brother Gideon").  Chasen, however, could also play the bitchy part of Aunt Rachel quite effectively to where you want to hiss at her. As for the others, particularly Robson and Brierley, they were a bit flat but I blame the parts themselves, which didn't give them much to do.  Futcher's Sowerbutts, a bit of comic relief himself, was amusing in his dotty nature. Lowe is sweetness herself as the future Mrs. Hudson, and we can see why she would let the eccentric Holmes into her flat.

One thing that did bother me was the casting of a white actor to play an Indian.  I don't blame Fiander for this, as he is an actor and played the part he was given.  However, I'm sure they could have hired an actual Indian actor to play the part, and by this time (1982), we can't have the excuse of 'this was in the past'.  I don't understand the decision to not let an Indian play this Indian.  Perhaps finding out that Ranjeet was really British or part-British helps, but by this time things had become a bit confusing.

The plot is not the most coherent.  Still, Guy Henry I thought did a very good job as the young Sherlock Holmes, and it's a pity we never got more stories (though I think it would have been better to dispense with the opening voiceovers and just started fresh and cut down the story to have allowed maybe one or two cases for those eight episodes).  There's some good comedy (every time Charity 'sings' for example), and some lovely details (Holmes trading his bowler in for a deerstalker) as well as good thinking (how Holmes comes to certain conclusions is well-crafted).   I think Young Sherlock: The Mystery of the Manor House will appeal primarily to Holmesians who like seeing any version of The Great Detective.  It is not the best of debuts, but a decent one.