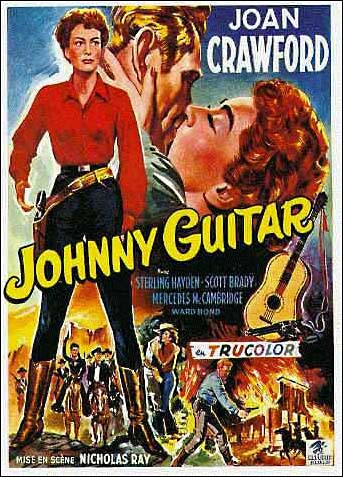 Johnny Guitar was once described as "Beauty & The Beast...with Sterling Hayden as Beauty".  It's earned a reputation of being one of the most gonzo Westerns ever made, and after seeing it, its reputation is well-earned.  "Weird" and "really weird" are pretty accurate definitions to Johnny Guitar, with some really strange inferences one can draw from the story.  This isn't to say Johnny Guitar is bad.  It's just really, really weird.

Our title character, Johnny Guitar (Hayden), who happens to be some sort of traveling troubadour, arrives in Arizona and from the cliffs, sees a stagecoach holdup.  He has been hired to entertain in a saloon located outside a town by Vienna (Joan Crawford), a casino that appears to never have customers.  Vienna is there because she knows the railroad is coming and she's going to be on the ground floor of a new boomtown.  Opposing her is Emma (Mercedes McCambridge) as well as JOhn McIvers (Ward Bond), both ranchers who fear the railroad will diminish their power.  Emma in particular is a rival to Vienna because she has passion for the man in Vienna's life, The Dancing Kid (Scott Brady), who is a gunman.  Emma accuses the Dancing Kid and his gang of holding up the coach (and killing her brother), but Vienna stands up for them.  Emma also says Vienna is in cahoots with the Dancing Kid's gang.

Johnny Guitar for his part, is actually a gunfighter named Johnny Logan, who had had an affair with Vienna many years ago.  McIvers, a bully to the Sheriff, orders the gang to clear out within 24 hours, with Vienna having to close her saloon in that time too for good measure.

To get out of town, the Dancing Kid's gang holds up the local bank, and it comes at the most inopportune time: Vienna happens to be withdrawing money from her account when the holdup takes place.  Johnny Guitar neither takes part in it or stops it, but the fact that they were both in the bank at the same time (and that the Dancing Kid kissed Vienna passionately) is enough to convince Emma and McIvers (along with their posse) that she was either in on it or the ringleader.  The gang manages to escape to their hideout save for Turkey (Ben Cooper), the kid of the group who was injured in the assault.  The posse meanwhile eventually makes it to Vienna's, she having ignored Johnny's suggestion they flee.  Vienna at first tries to keep calm with the mob and nearly manages to outwit them, but Turkey soon is exposed and the mob takes them both away, with Emma in her fury burning down the house.

Turkey, despite promises to the contrary, is lynched by the mob, and Vienna is about to meet the same fate when Johnny sweeps in to save her just in the 'neck' of time.  She and Johnny go to the hideout, and The Dancing Kid has never warmed to Guitar until he discovers he's Logan.  This earns him a mix of fear and contempt more than respect.  Emma pushes McIvers to fulfill her fury towards Vienna, thanks to help from Bart Lonergan (Ernest Borgnine), a member of the Dancing Kid's crew who wants to split but couldn't.  In the vicious end to their feud, Vienna kills Emma (though Vienna is wounded), and McIvers, shocked by how things had spun so out of control, lets them all leave.  Vienna and Johnny now are free to start their own lives, together.

Johnny Guitar, oddly, has very little to do with the main character.  Hayden's entire performance, while good, has an almost Zen-like quality, as if he is more wryly amused at all the weird goings-on around him than he is as a major player in the proceedings.  Apart from the fact that it's obvious he can't play the guitar, Hayden seems if not disengaged from the film at least a character whose who reason to be there is to give the film its title.

This film really is a two-woman show, with Crawford being the clearly dominant one, and not just on-screen.  Johnny Guitar has a very bizarre subtext that suggest lesbianism in both women.  Early on, we get Vienna's faithful servant Old Tom (John Carradine) virtually address the camera about how 'mannish' Vienna was.  With regards to Emma, we get this very curious bit of dialogue from Vienna to Johnny, explaining Emma's obsession with the Dancing Kid.

"He makes her feel like a woman, and that frightens her".

I leave it up to you to make sense of, as my mother would say, what's that's means.


Almost everyone, from Crawford to McCambridge to Bond to Hayden, appear to be somewhat acting in a haze, not in a 'they don't know what they're doing' style but in a 'we are slightly possessed' style.  The pauses, the staring off, the eerie calmness Crawford has throughout the film lends Johnny Guitar an almost surreal quality.

This is especially strange given how Johnny Guitar appears to have an almost operatic nature to it all.  The burning of the saloon, the near-lynching of Vienna, the wild hysterics of McCambridge (whose character doesn't like being reminded she is sexually attracted to a man) and the sets.  Dear Sweet Mother of Mercy, those SETS!

If Johnny Guitar is to be believed, Vienna's saloon & casino was apparently build inside a cave (or at least some of the walls looked like they were made out of a literal rock wall).  The bar had barrels holding it up, giving things an even weirder feel, as if deliberately calling attention to its own artifice.  The logic of Vienna's escapes us, since while the inside looks like it is a cave, there are no mountains directly around Vienna's.  Add to that the saloon was built on top of a mine and the hideout was accessible through going beneath a waterfall and you think things really are going a bit bonkers around here.

I also had a question regarding Emma's brother, killed in the holdup.  The mob brings the body into Vienna's in the beginning, but as far as I remember didn't take it with them.  The bank heist took place at the same time as Emma's brother's funeral, and I get the sense that this chase took so much effort no one in the posse ever stopped home for at least a change of clothing.

Another curiosity is the 'rivalry' between Guitar and Kid over Vienna.  One wonders why either man is in a tizzy over this extremely tough woman.  I'm not sure it played a large part in the overall story, but bless Crawford for insisting it would.

The overall weirdness of Johnny Guitar isn't to suggest director Nicholas Ray made a bad picture.  Some scenes, like Vienna facing down the mob, are actually quite well-filmed.  Any film that gets Victor Young to write the score is almost automatically elevated (though at times, the music comes across as oddly comical, such as the music that comes right after the mob leaves the first time (perhaps not taking the body with them).  I don't know if Johnny Guitar was meant as an allegory about the McCarthy Era like another Western (High Noon), but such allegories can be read into the story if one wishes to find them there.

Johnny Guitar has...interesting performances from Hayden, McCambridge, and especially Crawford, who is eerily calm throughout the film (even when she explodes she seems oddly restrained).  I think perhaps 'overwrought' would be a good term for the film.  Certainly not boring, quite beautiful-looking at times (really amazing cinematography with vibrant use of color) but I think that with regards to Johnny Guitar, I'll stick with...weird, just weird.