Best of Enemies: A Review

Best of Enemies chronicles a series of debates between conservative patrician William F. Buckley, Jr., and liberal patrician Gore Vidal during the 1968 Presidential election.  These debates, broadcast on the ABC Network to boost sagging ratings and as a cost-cutting measure for the financially-strapped network, became infamous for the verbal mudsling these two cultured men of letters launched at each other with particular vitriol on both sides (Vidal calling Buckley a crypto-Nazi live on-air, Buckley angrily retorting by calling Vidal a queer and threatening to punch him in the G**-damned face).

This was the apex of a lifelong hatred between these two intellectuals, polar opposites politically but in so many other ways eerily similar.  Best of Enemies paints the portraits of two men known for their wit, their way with words, and the power of intellect, tearing at each other in a bitter hatred that continued even after death (Vidal, who outlived Buckley by four years, smugly ending a reminiscence of Buckley with "RIP WFB--in hell").  In some ways a comedy, in some ways a tragedy, Best of Enemies is a fascinating portrait of when the Age of Punditry arrived on television, damning us to seeing people either echo each other's views or scream at each other if they are from different visions.

William F. Buckley, Jr. was one of the primary architects of the modern conservative political movement in America.  This would instantly make him Enemy Number One to Gore Vidal, who was as far left as one could get without being an actual Communist Party member.  Vidal despised Buckley's political ideas and saw them as dangerous.  Buckley thought Vidal's ideas would lead America to ruin and considered Vidal's writings, particularly his novel Myra Breckinridge, pornography.  Their clashing worldviews simply could not be reconciled.

Their growing rivalry, however, was not just merely political (though it certainly was that).  They began hating each other personally, seeing each other as deviants and freaks.  Buckley had already tasted television success in 1966 with his debate program Firing Line, his idiosyncratic speech tones and sharp intellect making him much sought-out for his insights (which he also promoted through his magazine, National Review).  Vidal, for his part, itched to take down the pompous patrician and expose him for an intellectual hack and a dangerous lunatic who'd blow up the world.

ABC came to Buckley and asked if he'd like to provide views for their Democratic and Republican Convention coverage; he agreed, but asked that the one person they not get be Gore Vidal.  I guess that was their impetus to get Gore Vidal.  Buckley was apparently dismissive of Vidal, going on a sailing trip a week prior to the Republican Convention in Miami Beach (the first of the two conventions in 1968).  Vidal prepared for his encounter with his hated rival like one prepares for war: studying Buckley's debates and having summaries of his National Review articles prepared (so great was his hatred for conservatism and Buckley as a person that he refused to touch a copy of National Review, let alone read it).  Thus, when they finally met, Buckley was ill-prepared for the barrage Vidal unleashed.  He wasn't rendered damaged, but Buckley realized that Vidal was not the weakling he might have thought.

As the coverage went on things increased in their tension.  It wasn't until their ninth encounter in the midst of the Chicago rioting that both exploded in total fury at each other.

After this shocking moment, both men simply could not let their mutual hatred go.  Buckley wrote a piece for Esquire Magazine chronicling his encounter with Vidal, causing MORE attention to go to this situation.  Vidal replied in kind, also in Esquire, and that led to libel lawsuits and counter-lawsuits.  Even when Esquire republished Vidal's piece for an anniversary special, Buckley was there to sue again.  Their mutual hatred in every way imaginable: social, political, even one suspects spiritual (or what they could consider spiritual) was deep, long, and lifelong.  Neither man appeared to be able to let it go.

Both men, now dead, suffered from their ABC appearances in their own way for the rest of their lives.  Buckley was forever haunted by his lapse on live television (though he was able to on occasion make light of it), the shock of his emotion overtaking his cool logic leaving its mark.  When Nightline did a program commemorating the ending of Firing Line, Ted Koppel showed the infamous "crypto-Nazi" clip, and for once in his life, William F. Buckley, Jr., master of the English language, said nothing in response when they went to commercial break.  Buckley was convinced (or perhaps had convinced himself) that the tapes had been destroyed.

Vidal for his part never achieved the lofty heights in the world of letters or intellect he thought was his birthright, his book sales diminishing and like Salieri of Amadeus, seeing his word growing fainter and fainter while those enemies of his he outlived (Buckley, Truman Capote, Norman Mailer) continuing to be read and admired.  His worldviews never dominated the political landscape as much as he thought they should, and by the time of his own death he was essentially forgotten by the average man on the street. 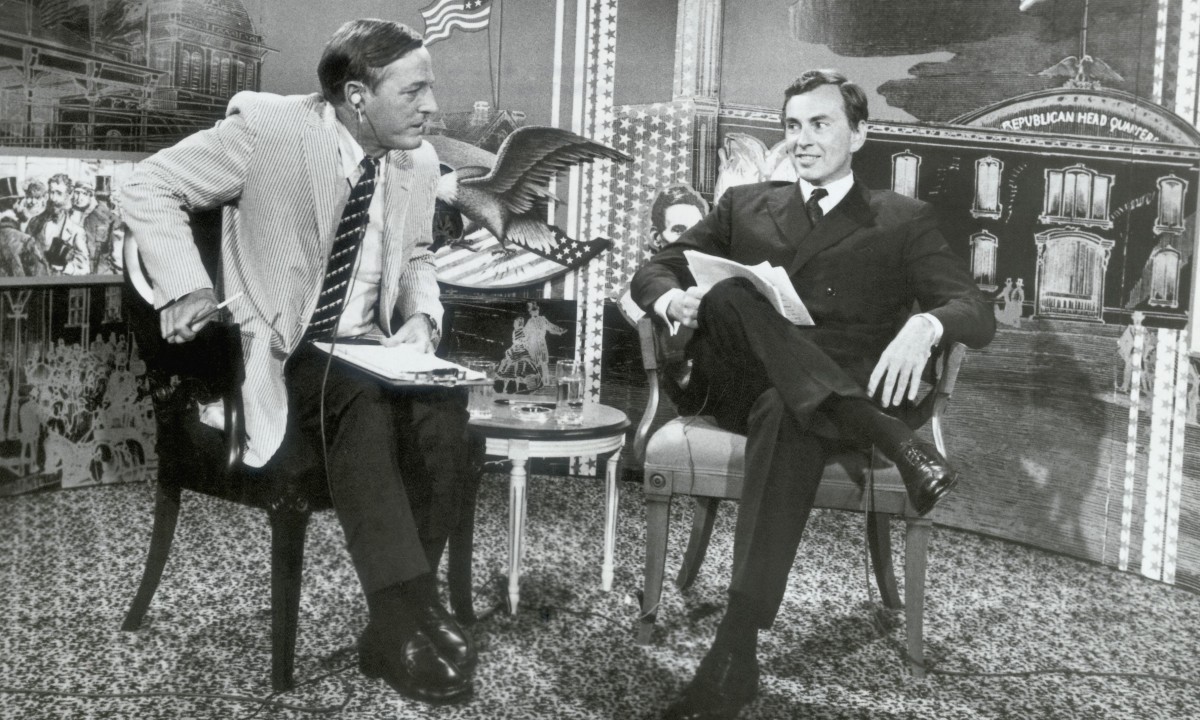 Best of Enemies is fascinating in that we see two men, opposite in every way imaginable, who really were much more alike than either would have dared admit (even to himself).  Both were hardly the patricians others thought they were.  The Buckleys had no interest in being part of high society and Vidal, despite being born into a privileged family, similarly had no interest in mixing with the moneyed class.  Both ran for public office (Buckley for Mayor of New York, Vidal for the U.S. Congress, the latter convinced it was the first step to his inevitable election to President...like Hillary Clinton). Both failed in their political aspirations.

Both men also simply could not let their vicious animosity towards the other go.  It's almost as if they fed off their hatred that went beyond the political but into the personal.  Neither of them were shrinking violets, and both had an ability to use words to their advantage.

Best of Enemies makes two wise choices with regards to voice-overs reading the words of Buckley and Vidal.  First, they hired two actors with distinctive voices of their own (Kelsey Grammer reading for Buckley, John Lithgow reading for Vidal).  Second, neither Grammer or Lithgow opted to attempt mimicking either men's distinct vocal mannerisms (particular Buckley's, who was one of the many voice impressions Robin Williams used for the Genie in Aladdin).  We get to hear from the participants themselves in a roundabout way, attempting to understand where they were coming from and how things devolved over time.

We also get fascinating interviews from such people as Reid Buckley (WFB's brother) and even Christopher Hitchens, who died in 2011.  As a side note, I think Hitchens would fit comfortably between Buckley and Vidal: an atheist like Vidal who was contemptuous of the Left's apologies for Western Civilization as Buckley was.

I think it is fair to state that I lean more toward Buckley's worldview than Vidal's.  Gore Vidal (whom I nicknamed BORE BANAL) had rather great view of himself.  "Naturally, I wanted to be a politician but was born a writer," Vidal declares via Lithgow's reading.  Buckley was no stranger to having a healthy ego himself, but I admit to being more conservative in my views.  This does not mean I agree with Buckley at all times nor does it make me actively dislike Vidal or not see him as a shrewd mind.

However, mercifully Best of Enemies is nonpartisan.  In its concluding images, we see the Fox News Channel and MSNBC brought in for criticism (albeit not openly).  We see what damage the likes of Bill O'Reilly and Sean Hannity on the right, Rachel Maddow and Chris Hayes on the left, have done to the discourse of American politics today.

Best of Enemies only alludes to the horrors of modern political punditry, with the Buckley/Vidal battle as the opening salvo.  That may be its only real flaw.  In terms of its exploration of these two bitter archrivals, of how two men who were both similar and radically different altered the American political landscape, Best of Enemies proves an excellent film.