Hell to Eternity: A Review 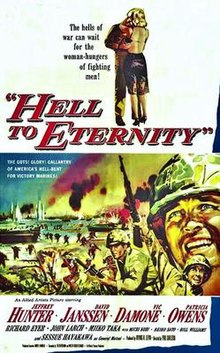 There is something both interesting and amusing about Hell to Eternity, the biopic about an American war hero.  The interesting part is that the film does not shy away from the immorality of the internment of Japanese-Americans in World War II, a subject not touched in 1960 and still not as well known today as it should be.  The amusing part is that the main character, a short Hispanic boy from East Los Angeles, is played by Jeffrey Hunter.  Hell to Eternity gives us perhaps the most bizarre 'whitewashing' of a lead character in film history (though I figure with the real-life figure's blessing).  If one forgets the oddball casting, some questionable acting, and the perhaps excessive length, Hell to Eternity can be quite entertaining.

Guy Gabaldon is a troubled kid: fighting with others and unbeknown to everyone, living alone (his mother dying in a hospital, his father gone).  His only friends are Japanese-Americans, which makes him a target for bullies.  After a fight, Kaz Une (George Shibata), a coach, sees the wounded boy behind the tough exterior and takes him to his home.  Guy finds refuge among this Japanese-American family, and bonds with Mama-san (Tsuru Aoki Hayakawa).  Mama-san speaks little English, Guy no Japanese, but slowly both learn to learn the other's languages.  Guy learns to love especially Mama-san and after his own mother's death is adopted by the family, to where he has no problem calling the males in the family his brothers.

Then comes December 7, 1941.  Guy and his brother's girlfriend are getting breakfast after church when they hear about the bombing, and instantly the anti-Japanese fervor sweeps them all up.  The Unes are sent to Camp Manzanar, while Guy, because he is not ethnically Japanese*, is not.  He wanders around, aimless, having been rejected for service due to a punctured eardrum.  When he visits Mama-san, the struggle he has about using his Japanese language skills and potentially kill people he's come to identify with comes to an end.  Mama-san tells him it's up to the new generation to clean up the older generation's 'mess', and with that, he pushes his way into the Marines. Once in camp, Guy is still a bit of a rebel, but slowly earns the respect and even friendship of his sergeant, Hanzen (David Janssen).  He also bonds with Corporal Lewis (Vic Damone), an easy-going fellow with an eye for the ladies (though whether his experience matches his eye is dubious).  First, off to Hawaii, where there are some amorous adventures (and even quite a daring striptease by Sheila, a non-sober reporter played by Patricia Owens).  Then it is off to Saipan, where brutal hand-to-hand fighting is the least of the Marines' ordeals.  Both Lewis and Hanzen are killed, the latter unleashing a rage within Guy that makes him dangerous to all sides.

Eventually, Gabby's Japanese skills come in handy several times.  He gets civilians to come out of their caves, but is also powerless to stop the suicides the natives are committing in terror over what the Americans will allegedly do to them.  When Guy witnesses an old woman and child about to jump, for a moment he sees Mama-san and his brother George take their place, and his broken when he sees them jump to their deaths.  He decides to undergo a dangerous mission: to stop General Matsui (Sessue Hayakawa, who was married to Tsuru Aoki) from leading his dying, starved, and desperate troops, on one last death assault on the Americans.  Guy captures Matsui, who in turn is ordered to tell his men to surrender.  He does so, but commits seppuku rather than fully surrender.  The Pied Piper of Saipan, as Guy Gabaldon was dubbed, brings in the entire army and civilians who with them to camp. 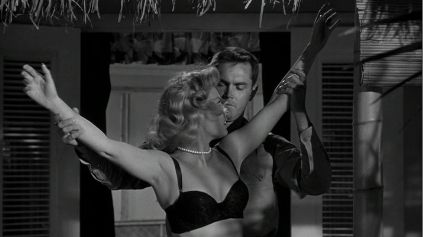 I'd say there are about three things wrong with Hell to Eternity.  First, at two-hours-eleven minutes, it is rather long, especially given that a great deal of time was spent in Hawaii, where it involved Guy, Hanzen, and Lewis picking up broads and seeing them perform stripteases.  It added nothing to the plot and seemed to come from another film altogether.  More bizarrely, I don't think Sheila was ever mentioned again.  It also made our three leads seem rather sleazy (save for Damone's Lewis, who came across as more unlucky-in-love than a horndog).  Two, some of the acting was on the weak side, and again we go back to Hawaii.  When the three shake down a cab driver they've hoodwinked into getting them whisky, everyone, especially the professionals, look like amateurs.

Three, and it's a big one, is the casting of Jeffrey Hunter.  First, he is too old to play someone who is supposed to be eighteen when he joins the Marines (looking every bit his thirty-four years).  Even that might be forgiven if not for the fact that Guy Gabaldon, in real-life, was Mexican-American.  Hunter in no way looks or sounds like a Hispanic from East Los Angeles, and I figure that the makers of Hell to Eternity would never have considered casting an actual Hispanic actor to play a Hispanic.  Moreover, the film seems to go out of its way to hide any suggestion of Gabaldon's true ethnicity (apart from the casting of blonde, blue-eyed Hunter as the brunette, brown-eyed Gabaldon).  I personally don't find the nickname "Gabby" for Gabaldon to be wrong or unrealistic.   It's the pronouncing of Gabaldon's name that seems to stretch believability.

The normal pronunciation of "Gabaldon", even if Americanized from the Spanish "Gab-ahl-DOUGHN", would probably be "GAB-ahl-done".  In the film though, we get the rather odd-sounding "Gah-BALL-dun", which sounds like a strange mixing of the English and Spanish pronunciations that doesn't work on either level.  Now, it isn't as though I don't get why for Hell to Eternity they opted for Hunter (and Gabaldon, to his credit, harbored no ill will, naming one of his sons Jeffrey).  However, since the film's debut I think this decision now looks highly bizarre, even bigoted.  Perhaps in a remake (which I hope they eventually get around to), the filmmakers will get the casting right.

Still, this isn't to say that Hunter gave a terrible performance throughout.  Once we got to Saipan, the horror and fury within Gabaldon (no matter how you pronounce it) was clear: the fury of seeing his friends killed along with Gabaldon's conflict about killing those who looked like the people he loved.

Hell to Eternity is also amazing in how open it is about another kind of bigotry: that against the Japanese and Japanese-Americans.  George Takei (billed as George Takai), who would later go on to great fame as Mr. Sulu on Star Trek was himself interned during the war, plays Guy's brother George.  (In an irony, Hunter was originally cast as Captain Pike in the unaired pilot for Star Trek, but opted against appearing in a second pilot, thus preventing a Hunter/Takei reunion and costing Hunter a chance to appear in an iconic television series.  As a result, Takei, who played second fiddle to Hunter in Hell to Eternity, would become more famous than his costar Hunter).

The film portrays the Unes as decent, kind, law-abiding and patriotic citizens, people who gave the "all-American" Guy the only real home he'd ever known and the love he so desperately needed.  We feel great sadness and strong anger at how these kind people are treated so shamefully by their own government, and Hell to Eternity I think is one of the few films that openly addresses this and portrays the Asian characters as decent (a rarity even today...I'm talking to you, Tomb of the Dragon Emperor).

I wouldn't call this move brave, but given that the interment of American citizens for no reason other than their ancestry is still not well-remembered, you have to give credit to Hell to Eternity for being open about this (and about Gabaldon's genuine anger about it).  Granted, the true conditions of the internment camps aren't shown, but that it was mentioned at all and that the Japanese were portrayed positively is a giant step in the right direction.

One performance that did impress me was Damone, who brought lightness to his Lewis and at who performed his death scene quite well.  He used the character's trademark snapping of his fingers to let them know where he was, and when his fingers stopped snapping, we knew the end.  It is actually quite sad.  Director Phil Karlson, though probably limited due to budget, also had good ideas (Guy's vision of Mama-san and George's suicide, while on the cheap side, was as well-rendered as the money would allow).  I also thought well of Aoki Hayakawa's Mama-san (her only sound film performance, she having gained fame for her work in silent films and having come out of retirement for Hell to Eternity).  Her genuine warmth and love for Gabaldon comes through, and we see that for her, Gabby is one of her boys (the feeling is mutual and subtly shown, with Mama-san's picture prominently displayed on Gabaldon's desk at his apartment, him feeling no shame in being associated with Japanese-Americans).

Hell to Eternity has those flaws of length and bizarre casting (no way will I believe that Jeffrey Hunter could be Mexican-American).  However, the fact that the Japanese characters were treated with respect, some real moments of sadness at the horrors of war, and Gabaldon's conflicts about who he really was, the film more than makes up for its flaws.

Some things never change, I guess.

*Given that Gabaldon was of Mexican descent, it seems unlikely he would have been sent to a Japanese/Japanese-American internment camp, though Hell to Eternity makes no mention whatsoever of Gabaldon's actual ethnic origin.
Posted by Rick at 11:22 AM