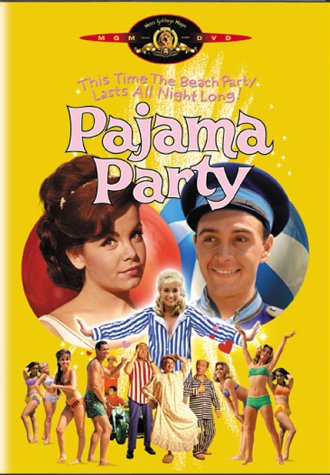 Once, teenagers in film were seen as fun-loving, goofy, but essentially harmless (even if they did come from outer space).  A slew of Beach movies in the 1960s popularized (or at least promoted) a particular lifestyle: a carefree one centered around the beach, dancing, girls, and joyful frivolity.  Pajama Party is an odd entry in this series in that there are new characters and an odd scenario (even for them).  However, while not a great or perhaps even good film, Pajama Party is at least in on the joke which makes it tolerable.

Go-Go (Tommy Kirk) is the advance man in the planned invasion from Mars.  He is obviously a bit of a moron (coming to Earth dressed as a hotel doorman under the idea that this is what typical teenagers wear), and he hits upon Aunt Wendy (Else Lanchester), herself highly eccentric and daffy.  She sees nothing odd about Go-Go coming from Mars, though she seems to be dismissive of this idea as just another teenage eccentricity.  Calling him George, she has him stay with her.  Aunt Wendy is kind of a den mother to the group of California teens, her home and unsuccessful dress shop a haven for the beach crowd.  Her big lunk of a nephew, Big Lunk (Jody McCrae), is too focused on volleyball to think about his newest girlfriend, Connie (Annette Funicello).  Aunt Wendy thinks George would be perfect for her, and she's right: both of them fall in love with each other.

Aunt Wendy is in danger though.  She is a very wealthy widow and her neighbor is determined to steal the fortune she keeps in the house and not in a bank.  That neighbor is J. Sinister Hulk (Jesse White), who has two inept henchmen, Fleegle (Ben Lessy) and the Indian Chief Rotten Eagle (Buster Keaton, yes, THAT Buster Keaton).  Also aiding them is the Swedish bombshell Helga (Bobbi Shaw) who can only say, "Ja, ja".  She will entice Big Lunk to reveal the whereabouts of his aunt's fortune, but Big Lunk is such a moron he tells her Aunt Wendy never tells him due to the idea that he's a moron.  With that, J. Sinister Hulk decides that getting Aunt Wendy out of the house to chaperone a pajama party at his will give his crew a chance to break in and rob her blind.  Fortunately for Aunt Wendy, the henchmen prove especially inept, among their other idiocies having the Rats Gang, headed by Eric Von Zipper (Harvey Lembeck) come to the party as their idea of 'clean-cut all-American youth).  With help from George, the gang's defeated, the robbery foiled, and everybody's happy (Big Lunk and Helga get together, as do George and Connie). 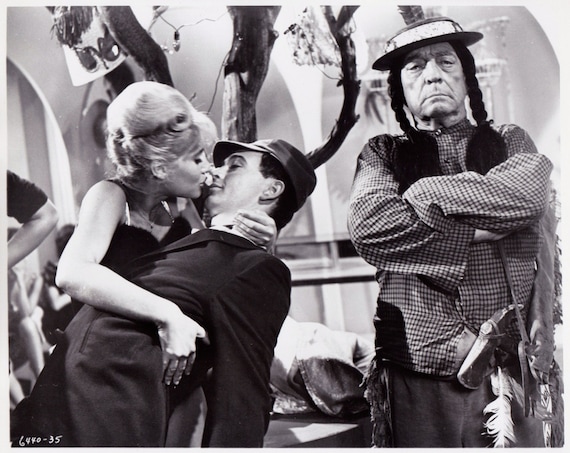 Pajama Party might have been re-titled Plan 10 from Outer Space, given the oddball premise.  However, I think both participant and viewer went into Pajama Party with the understanding that it was meant as nothing more than a lark, a mild and amusing diversion not to be taken seriously.  We know this because more than once the fourth wall is broken, the characters looking and/or directly addressing the audience to essentially join in the fun.

As I've said, I never condemn a movie for meeting its goals (no matter how low they are) and as such, I find Pajama Party an extremely light affair.  Now, this doesn't mean that I found it particularly good as a film.  It is dumb, it is silly, it is broad.  However, even within the overall silliness of it all there were some really good moments.

Whether you think it amusing or sad to see Buster Keaton essentially reduced to this, his first Beach film, depends on your idea of whether you think he is an artist or he needed to eat (and sadly, drink).  However, Keaton is responsible for one of the best and funniest moments in Pajama Party, giving us a slight taste of his true comedic genius.  He is in Aunt Wendy's dress shop when a perfume vendor sprays him.  He 'returns the favor' by spraying her, and from there, the battle is on between them to see who can spray more at the other, down to getting larger bottles.  This bit would work in a silent film, and in fact there is no dialogue between them.  I don't know whether this came from a previous Keaton film or whether he himself came up with it (I suspect he did), but it's about the only time I did burst out laughing.

The performances were appropriately broad save for Funicello, who to her credit is the only one playing it straight.  As Connie is the most sensible of everyone in Pajama Party, it makes perfect sense.  She I think was the model teenager in the early 1960s: pretty, wholesome, with an almost innocent sex appeal to where boys found her attractive and their parents found her agreeable.  She works well with Kirk, who is also appealing as George.

Kirk played the part with a wide-eyed wonder to everything that gives George a pleasant demeanor despite being a 'villain' (he IS there to invade and conquer us after all).  It's a shame that both homophobia (Kirk was dropped by Disney when they learned about his homosexuality, thus his reason for going to American International Pictures) and his own irresponsibility (drug use) wrecked his career.  However, we don't see any issues on-screen, particularly when Kirk and Funicello duet on There Has to Be a Reason, a nice song that shows both have nice if not great voices.

The adults played their parts appropriately.  It is a bit odd to see Lanchester so shameless camp it up but she did get into the spirit of things.  A cameo by Dorothy Lamour at the dress shop allows her to shimmy with the best of them, and Keaton (even with his pidgin English) is amusing.  "Me red man with yellow streak.  Real name Chief Chicken Feather", he tells them when they're in danger of getting caught.  Throughout the film Keaton, with a feather in his trademark pork pie hat, keeps things amusing.

On the whole Pajama Party is an odd fit in the Beach Party films in that regulars Don Rickles and Frankie Avalon aren't a big part of it (though the latter has a cameo that is pretty obvious) and there are only a couple of scenes that are actually on the beach itself.  It's a silly film, but intentionally so, one that is fully aware of its own silliness.  Any film where a beautiful girl can have no reason apart from dancing (and being so good at it that she causes candles to melt and miniature volcanos to explode just by her movements) knows what its doing.