The Librarians: And the Point of Salvation Review

THE LIBRARIANS: AND THE POINT
OF SALVATION

I think people really don't appreciate just how hard it is to act a story where we find the characters having to repeat things.  This is why Groundhog Day really is one of the great films, because they have to not just act, but make each time we see them repeat the same thing look like it is perfectly natural.  With And the Point of Salvation, we get this kind of scenario, where we're going over the same event time and again.  This Librarians episode though does give us a logic behind the magic (take a lesson, Doctor Who), and gives us a chance to see another character take center stage, complete with great character growth.

DARPA has gotten its hands on Atlantean technology in the form of a rock which they are using on their machines.  Very quickly though, their computer system behinds to malfunction.  The Librarians Ezekiel Jones (John Kim), Cassandra Cillian (Lindy Booth), Jacob Stone (Christian Kane), along with their Guardian Eve Baird (Rebecca Romijn), go there to retrieve the stone.

However, they face the DARPA crew which have turned into what Jones calls "Rage People", and even after battling them and getting through to locate where the Atlantean rock is, Jones' thieving skills fail him, causing Stone to shout "Some Master Thief", and they apparently get killed.

It's then when things take a strange turn.  We find ourselves back to the beginning of when they stepped into DARPA, only none of them save Jones remembers they've been there before.  When Jones comments on the fact, the others think he's joking.  Over time though, as they keep facing the same situation again and again does Jones (who is not affected because he was the first one into the room) realize they are in a time loop. 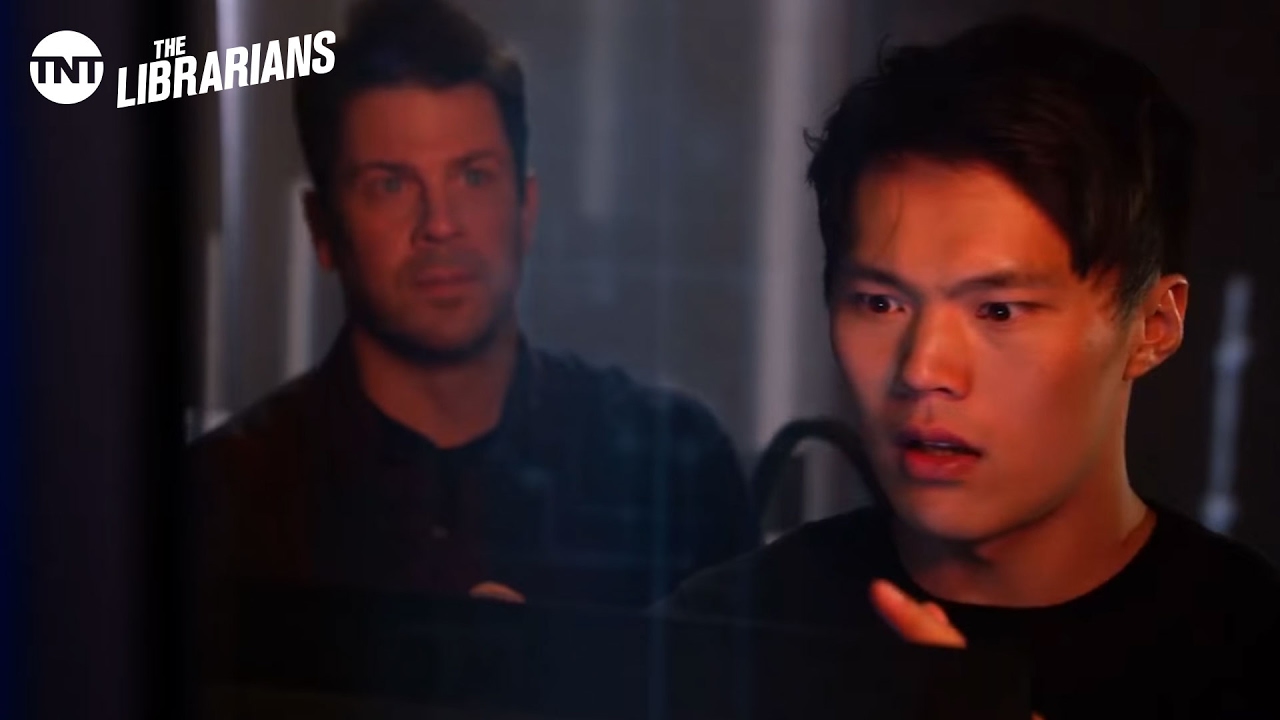 Due to this, Jones is able to recreate what has gone on before, is aware of the traps they've faced and can correct his mistakes to get further ahead (like massive do-overs).  However, whenever any of them die, they have to start all over again, with only Jones able to remember.  Sometimes, Jones does take advantage of the fact that if any of them die, they really won't 'die' (such as when he allows Stone to step onto a trap that zaps him due to Stone's constant complaining about Jones' skills).

For the most part though, seeing the other die and die again is starting to take its toll.  Being trapped and seeing the other's deaths finally makes him vent by trying to smash some items, but by doing so, he sees them turned into other things.  Jones then realizes they aren't in a time loop, but in a video game (which makes sense since one of the DARPA scientists had been playing one on his machine before the general came in for an inspection, which he had to hurriedly hide).  Once he realizes this, Jones (who plays video games constantly in his off-hours), can maneuver over much faster.

However, he realizes that he still needs the other's help with things he doesn't understand, like engineering (where Stone comes in), physics (where Cassandra comes in), and fighting (paging Colonel Baird).  Even then, they still die, and eventually Jones has had enough.  He tells them that he cannot watch them die anymore.  "I'm not your friend, but you're all my friends," he tells them, and as such he is determined to save them once and for all.  Eventually, armed with all his knowledge, he guides them to the end, where while Jones gets them to the end of the game, he himself does not make it, causing a Fatal System Error when he (as the player) dies.  The others now go and rescue him, saving the DARPA crew in the process.  None of the DARPA crew remember anything, and neither does Jones, who cannot believe that he'd even care about any of them.

However, at the end we're not quite sure whether he actually does not remember.  For his part Jenkins (John Larroquette), who has summoned a fairy to get information about Prospero, learns when Prospero will strike...and that's now.  Unbeknown to any of them, a powerful spell has affected them, the results of which we will see later.

And the Point of Salvation, like other Librarian episodes of late, appears to have a double meaning.  It relates to both 'the point of salvation' where the Librarians go back to where they started in this real-life video game.  It can also relate to Jones' 'salvation' from his own selfishness and egoism.  As he is cursed to relive the same events again and again, Jones begins to see that despite himself, he does care about these people he's with.  At first, he thinks he does not need either their abilities or them as individuals.  Time though, shows him that seeing them die, even though he knows they'll come back, is painful.  It reveals to Jones that their lives matter to him.

It also reveals that they work best as a team.  Jones realizes this when he keeps locking them up in a room at the beginning of 'the game' late into the episode.  Whenever he gets stumped, he takes one of them with him to tutor him on what he does not know. Jones even begins to respect them both for what they know and especially for who they are as people.  He comments to Baird when they are about to cross the Rage People that even though she's told him the story of who the bravest men are (those who see the danger and go ahead anyway), he feels honored that she'd make the parallel.   It's a sign of growth, which makes the ambiguity of whether he actually did learn to value them frustrating to me.  I wanted so desperately to have that confirmation, that Jones has matured.  Maybe they wanted us to imagine it for ourselves, or wanted Jones to remain pretty much as he was.  I don't know.  I think though, that is what pushes the episode down a bit for me.

As And the Point of Salvation appears to be a Jones-centered episode (which would thrill the egocentric Jones), John Kim really shows us what he can do.  He is still Ezekiel Jones, master thief and raging egomaniac, but we do see over the episode a chance for him to develop the character into someone more caring and thoughtful.  As strong as his development was (and this is Kim's best hour on The Librarians), I think he actually had the easier part.  Jones was the only one to remember, and as such could change his performance whenever the scenario started again.  It was the others who had to repeat themselves, to act exactly the same way every time they entered.  This has to take extraordinary skills, to make us believe that they really are unaware that they are repeating themselves.  The fact that they did it so well is a credit to Kane, Booth, and Romijn as actors and director Jonathan Frakes, who keeps things going quickly and as grounded as any Librarians episode can be.  Kane's constant put-down to Jones ("SOME MASTER THIEF") for me were a highlight, to see how he'd manage to work that in.

IF it weren't for the ambiguity of whether Jones really did or did not remember (and for me, robbing a character of a chance to develop), And the Point of Salvation would have ranked higher.  However, it is still a fun episode, driven by its own logic and with really strong performances by the cast and especially John Kim, this was another standout episode for a series that is fun, unapologetically family-friendly, and did I mention fun?

Next Episode: And the Happily Ever Afters
Posted by Rick at 6:12 AM