Roots: The Gift. The Television Special 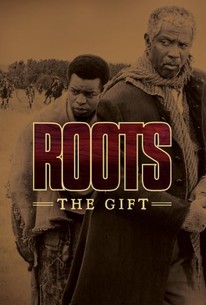 The idea of a Roots "Christmas Special" seems downright bonkers. The epic miniseries detailing the "peculiar institution" of slavery through the experience of four generations of an enslaved family does not appear to open itself to the happy warmth of the holiday season. Roots: The Gift is not about how Kunta Kinte met Santa Claus. It aims to be a story of the genesis of the Underground Railroad, but if you have seen or are aware of Roots, this spinoff undercuts a bit of what has come before.

Roots: The Gift, made eleven years after Roots captivated the nation is set seven years after the infamous and heartbreaking moment when African slave Kunta Kinte (LeVar Burton) is finally whipped into submission to accept his literal slave name of "Toby".

Spotsylvania County, Virginia, December 1775. Both Toby/Kunta and Fiddler (Louis Gossett, Jr.) are owned by Dr. William Reynolds (Jerry Hardin), whose been invited to a Christmas party at the nearby plantation of Edmund Parker, Sr. (John McMartin) and his wife Amelia (Michael Learned). While happy to take Fiddler so as to provide entertainment, the doctor reluctantly takes Toby to be the coachman.

Once there the Parker plantation finds itself awash with all kinds of visitors welcome and not. Edmund Parker, Jr. (Shaun Cassidy) has arrived from Harvard. Also here is Mr. Cletus Moyer (Avery Brooks), a whose appearance and status as a free man of color stuns Kunta. Despite being a free man of color he is still black, and is captured by Hattie Carraway (Kate Mulgrew) the rare female bounty hunter.

Cletus has been aiding runaway slaves and as such is a wanted man. Hattie cares only for money, the rightness or wrongness of slavery irrelevant to her. Kunta and Fiddler learn that Cletus was about to help more runaways when taken and asks Kunta to take his place. He's eager to and get freedom for himself, but Fiddler is more reluctant. They do go to meet Cletus' contact of "Ciris", who turns out to be a surprising figure but agree to help the runaways with the chance of them joining the party.

A slave rebellion terrifies the whites and even longtime loyal slaves like Mammy May (Fran Bennett) and house slave Marcellus (Tim Russ) are treated not as "family" but as that appalling word by their masters. Despite the dangers, Kunta and Fiddler help the runaways after Moyer and two runaway slaves are lynched.

Will Kunta and Fiddler lead the small group, including a pregnant woman about to give birth, to freedom? Will they themselves be free?

I think the answer to the last question will be easy to answer if you again know anything about Roots. That takes away from any tension or suspense in Roots: The Gift since we already know what will happen. D.M. Eyre, Jr.'s screenplay also does not really bother setting up "Ciris" true identity and it should be pretty obvious who "Ciris" is. It's almost to where one wonders how long it would take to get anyone to figure it out.

Roots: The Gift also has some pretty bad performances, as if everyone involved was either thrilled to be part of the Roots storyline or aware that they were "acting". I was surprised that Brooks' Cletus was excessively dramatic as Cletus Moyer from the get-go, posing and using his rich voice to sound rather grand even when saying sometimes banal things. Learned and McMartin were also somewhat theatrical, sometimes to unfortunate effects. The scene where Edmund, Sr. slaps the subservient Marcellus should have been shocking. As played by McMartin, it comes across close to silly.

Cassidy, to be sure, was quite beautiful as the progressive Edmund, Jr., but he was not exactly a complex character, the white voice of reason in this evil world. I think by now both Burton and Gossett, Jr. knew their roles so well that they seemed to more coast through it, a shadow of their excellent work in Roots. Curiously, the best performance came from Mulgrew. She was evil incarnate from the get-go, but at least she had a more complex figure to play than some of the cardboard characters in Roots: The Gift. She was a bit of a feminist albeit a twisted one: a woman who had no love for the slaveholding aristocracy and certainly knew that her options were limited as a woman.

The special has a hard time balancing the horror and inhumanity of slavery with the logic of the plot. Take for example when little Arabella Parker (Brandy Brown) uses Kunta as a camel for a Christmas pageant (down to pulling monstrously hard on his reins). When he's reached the end of his patience with this dual indignity he stands up literally and figuratively to everyone there and mentions that he is not a camel. Despite some addled protests from Arabella's mother, Kunta seems to be in command.

More surprising, he tells Arabella that his name is "Kunta Kinte" and everyone around him behaves as though a slave calmly but firmly reprimanding a little white girl is perfectly normal. All I could think was that they were very understanding white folks, letting a slave talk back to them with no word of complaint versus slapping loyal slaves who were actually helping them withstand the oncoming rebellion.

Roots: The Gift feels like a lost episode than a genuine addition to the Roots story. One can appreciate the message that "the gift" on this Christmas Eve is freedom, a most worthy gift. However, since we know Fiddler and Kunta Kinte/Toby will not be free, it does make it less than what it could have been to where it might have worked better if Kunta's descendants had met the Underground Railroad.