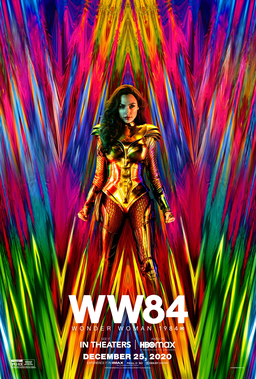 In 2017, I was wildly impressed with Wonder Woman. I was so impressed I named it the Best Film of the Year. I thrilled to its mix of action, fantasy, adventure and romance. After a few unfortunate delays due to the COVID pandemic/panic, we have at last the sequel Wonder Woman 1984.

It won't make my Ten Best, though perhaps I'm too charitable to place it among the Ten Worst.

It is 1984 and Diana Prince aka Woman Woman (Gal Gadot) is still pining for her long-lost love Steve Trevor. Now working at the Smithsonian, she moonlights as a crimefighter. One of those crimes at a mall jewelry store leads to the discovery of an object with a Latin inscription. New gemologist Barbara Minerva (Kristen Wiig) is tasked to catalog the stolen cache.

That object has the power to grant whoever holds it their great wish. Unbeknownst to them, Barbara and Diana make wishes in a somewhat insincere manner: Barbara to be like Diana, and we find out later, Diana to be reunited with Steve (Chris Pine). However, also aware of the object is fraudulent oil tycoon Maxwell Lord (Pedro Pascal). He wishes to literally be the object, able to grant wishes but at a cost to whomever makes the wish.

As Maxwell now finds himself gaining more power, Diana starts losing hers due to the wish carrying that secret cost. The only way to return things to normal is to renounce the wish, but no one wants to despite the growing chaos. It's "the Monkey Paw effect" as Steve points out. It is up to Diana/Wonder Woman to take that first step, and then to fight against Maxwell and Barbara (now transformed into Cheetah) to stop the ultimate destruction. 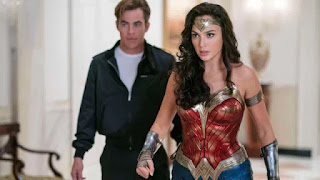 It's a curious thing that twice in my notes, I referred to Wonder Woman 1984 as having "Superman III vibes". By that I mean that things look a bit cartoonish, interested more in laughs than straightforward storytelling. There just seemed to be no enthusiasm for anything and about anything.

It is a poor sign for me that at what is meant to be a climactic battle I was fighting to stay awake.

One major issue is length: the film is over two-and-a-half hours long, and director Patty Jenkins (cowriting with Geoff Johns and Dave Callahan) should have cut out well over half to a full hour out of this. The opening Themyscira sequence is a punishing 11 minutes long and add the mall jewelry store robbery and we're close to half hour into this story without anything actually happening. There's this sluggishness which drags throughout Wonder Woman 1984 that makes things feel even longer.

It takes over half an hour for Diana, Barbara and Maxwell to share the screen, and close to an hour before Steve shows up. How he turns up is where we go for some unnecessary comedy bits about 80s fashions and the wonders of the post-World War I world Steve never lived to see. Inserting Steve Trevor into Wonder Woman 1984 by the most oddball of ways seems so irrelevant to anything.

About the only really remarkable thing is Chris Pine's lack of vanity of allowing his greying hair to be seen. 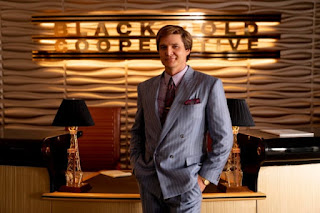 I can't say anything particularly good about any of the performances. Gadot looks bored and blank, reciting her lines with apparently no enthusiasm. Wiig was surprisingly restrained as Barbara, the nebbish who now has powers. Perhaps that was to counter Pascal, whose manic manner seemed at times bordering on farce. I'll cut him some slack only because Maxwell was saddled with a "motive" for his evil: keeping his son Alistair (Lucian Perez). Why water down the villain by trying to show his softer side?

That is such a cliché, and not a particularly good one or good use of it here.

Moments that want to play into being magical, such as Diana turning the stolen airplane invisible or flying (whether through Independence Day fireworks show or on her own as apparently Wonder Woman can practically fly a la Superman) looked less magical and duller.

I think I might have hit on the big issue with Wonder Woman 1984: it wasn't fun. It wasn't anything really. There's no real story here. Everyone looks pretty bored. You wait for something to happen. There's no enthusiasm, no sense of adventure or joy here.