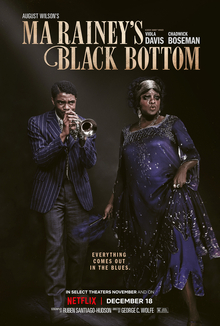 "Mother of the Blues" chanteuse Ma Rainey (Viola Davis) is booked for a recording session during her tour. She knows it will earn her money and exposure, but she also knows that as a black woman, she has to be shrewd about exercising what little power she has over both the white record executives and her band.

The band is at a crossroads. While her trumpeter Cutler (Colman Domingo), pianist Toledo (Glynn Turman) and bassist Slow Drag (Michael Potts) know that what Ma says goes, talented but arrogant trumpeter Levee (Boseman) is more than willing to push people's buttons. He isn't afraid to try and upstage Ma, a cardinal sin.

As the band waits for the diva, they talk, laugh and argue about their lives and work. As Ma makes the nervous recording engineers and executives wait, she too explains herself. Recording session finally done, Ma Rainey and Levee go their separate ways, with tragic and unexpected results for the latter. 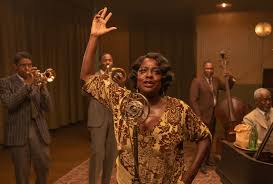 Ma Rainey's Black Bottom is part of the late playwright August Wilson's "Century Cycle", chronicling the African-American experience in ten plays: one for each decade. Here in the 1920s, we see current issues brought to life: issues of power struggles between executives and artists, the exploitation of black performers by white management, the desires for advancement being frustrated. The play probably did not foresee the chaotic world the film version would see, but Ma Rainey's Black Bottom is well-balanced in being both a story of its time and almost allegory of the world now.

We see great performances throughout, in particular from Boseman and Davis. Ma Rainey's Black Bottom, despite the title's suggestion, is not about Ma Rainey herself. This is more Levee's story, and Boseman gives an exceptional performance. Levee's outwardly arrogant and cocky manner disguises deep hurts and fears, and Boseman plays Levee on a wide range of levels. The shifts from braggadocio to tormented, even blasphemous is strong and impactful. His monologues about his mother's attack will stay with the viewer after the film is over. It is a haunting, deep performance, more so given that Boseman was literally dying while making the film. 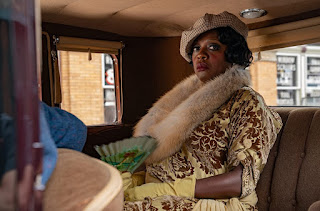 Davis too is excellent as Ma Rainey, communicating so much with just a look, a glance or a body movement. She makes Ma a woman aware that she has little power but knowledgeable in how to use what power she has. Ma Rainey is a diva, but one who fought hard to get what she has and who will brook no opposition be it from Levee or the record company.

Ma Rainey's Black Bottom is also blessed with excellent production design in forms of its art direction, costuming and score. Director George C. Wolfe blends all the elements to make a strong, entertaining and insightful film.

Here however is where I have a couple of points that keep Ma Rainey's Black Bottom from being an outright masterpiece. First is that while Ruben Santiago-Hudson's adaptation works on the whole well, it still sounds like a play. Early on we can see that this originated as a theatrical piece because the film plays as a theatrical piece. Rather than fully open up Wilson's work Ma Rainey's Black Bottom feels closer to the Disney+ presentation of Hamilton than say Elia Kazan's A Streetcar Named Desire.

Davis' prior venture in August Wilson adaptations Fences had a similar issue where the stage trappings were evident. While Wolfe directed the actors well, the staging still came across as staging, with actors giving monologues in the form of a stage presentation. One could even sense when a stage production would let actors off and on the stage. Try as it might it couldn't shake off its theatrical roots.

Another issue is with Davis, not her acting but her screen-time. She's being promoted as a Leading Actress when her she isn't on screen much. She's certainly on screen less time than Boseman, and for me she is clearly a Supporting character, not a lead. A minor issue perhaps, but still one given how a potential awards campaign is being launched for her.

Ma Rainey's Black Bottom is perhaps too stage-bound to be a fully-realized feature film, but with excellent performances and production it is well worth the time.