Nomadland, the adaptation of Jessica Bruder's nonfiction study into the lives of economically displaced people traveling and surviving post-Great Recession, is well-acted, beautifully shot and overall well-made. So, why did I dislike it?

Fern (Francis McDormand) is a recent widow whose whole town was literally wiped off the map after the major sheetrock plant closed. With no savings and no job, Fern makes due with a variety of odd jobs ranging from working at an Amazon processing plant to cleaning toilets at state parks. She travels the American West in Vanguard, the name she's given her van/home. Fern meets up with other nomads who either by circumstance or desire do as she does. Fellow nomad Dave (David Strathairn) obviously fancies her but she isn't interested in romance.

She also isn't interested in literally settling down despite offers from friends, her sister Dolly (Melissa Smith) or Dave himself, who has eased his way back into stationary life now that he is a grandfather. With no husband or children of her own, Fern continues on, despite the various difficulties and dangers there may be out there. 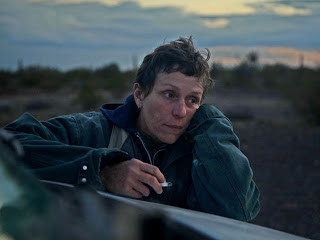 This is my own view, probably not one shared by fellow reviewers who gush endlessly about Nomadland, but perhaps this is the worst time for this film to be released. Millions of lives have been disrupted due to the COVID-created economic crash; people are out of work, perhaps having lost their businesses or even family from COVID itself or related issues (suicides or overdoses). As such, with so many struggling, who would want to watch this story of the wandering homeless (a term to be fair they'd never use for/about themselves)?

I suspect, and again this is just my own view, that many potential Nomadland audience members would kill to have that Amazon job Fern seems if not blasé at least casual about. Granted, the Nomadland characters would say they are not miserable and may even be happy, but I do think most people watching would not welcome the life those in Nomadland have, especially when they fear being on the verge of being on the street.

"Have" is a good word, for the film has very few professional actors. Most of Nomadland's "actors" are real-life nomads playing themselves. Of particular note is Bob Wells, who is a guru to those who live the nomad life and plays a version of himself. It's clear that most of the people we meet in Nomadland are not professional actors, but it's a credit to director/screenwriter Chloe Zhao that they do not appear forced or uncomfortable on camera.

In fact, Nomadland does have a documentary-like feel, down to taking its time in going through mundane presentations on the right bucket for toilet use. The film is enhanced by beautiful cinematography and a beautiful albeit mournful score. The score and sparseness of Nomadland may have been a major reason as to why I kept writing "miserable" in my notes. Despite protests to the contrary, I never sensed these people were actually "happy" or even content in this peripatetic life. It's almost as if they had to be there even if they would say they wanted to be there.

Credit should be given where it is due. The visuals and music are wonderful, as so is Francis McDormand as Fern. This is a quiet performance, but McDormand communicates much with her stillness, her control. Early on, in a curious echo of the end of Brokeback Mountain, Fern holds her late husband's jacket tightly before putting it in storage. It says so much in that silence. As she travels, Fern has both an empathy for those around her and an anger to those who question her life, even when attempting to "help". Sometimes that anger is overt (like with Dolly) and other times more puzzlement.

Strathairn was less believable as Dave. Somehow, it didn't ring true that he was anywhere near a working class man, the baseball cap and halting manner seeming more calculated in an effort to ingratiate himself to nomads than being a nomad himself.