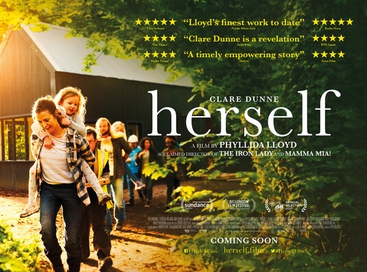 HERSELF
In Herself, we have the potential for an inspirational story of female empowerment with the potential for a surprisingly good dramedy. Somehow, there's a lot of potential in Herself but that potential, already teetering, fell apart just at the end.
Sandra (cowriter Clare Dunne) finally escapes her abusive husband Gary (Ian Lloyd Anderson) with their two daughters. Despite having two jobs she cannot afford a home of her own home or even a decent apartment in high-cost Dublin. In a mix of inspired and desperate move, Sandra comes up with the idea to build herself a small home.
With the help of various people her dreams of a tiny house figuratively and literally rise. There's Peggy (Harriet Walter), one of her employers who lends her the land and money. Next comes surly Aido (Conleth Hill), a construction supervisor who knows Gary and what a beast he is. Along with the mother of her daughters' friend and the squatter friends of another coworker, Sandra soon starts building.
However, a series of unfortunate events lead Sandra to face off against Gary in court for custody, which itself leads to a fiery conclusion. 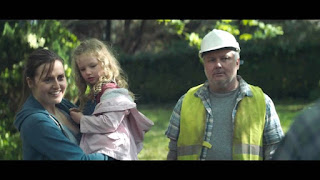 Herself trips itself up in various ways. It seems it wants to simultaneously be quite serious and inspirational. These are not mutually exclusive, but somehow the elements between slight whimsy and tense drama don't gel as well as they could.
For example, all the people helping Sandra are given the most cursory attributes (one has Down Syndrome, one appears jolly, one is Cameroonian) but the film asks us to accept that they have bonded over the shared project when they don't seem to have much connection even when working together, let alone outside.
It just seems all too convenient, too easy to round up this group, almost as if they came straight from Central Casting to resolve many of her issues.
It also cannot resist adding touches of drama that can be seen from miles away. What, for example, were the odds that her older daughter Emma (Ruby Rose O'Hara) would get into a scrape that would later be used against Sandra? The final surprise, however, is perhaps the worst, as if Dunne, her cowriter Malcolm Campbell and director Phyllida Lloyd could not or would not give Sandra a happy ending. It just seems almost cruel.
Somehow, one thinks that under other hands Herself would be close to either a heartwarming comedy or that empowerment film it wants to be. However, it seems set on being a bit dour while trying to be uplifting too, a strange mix that does not quite work. 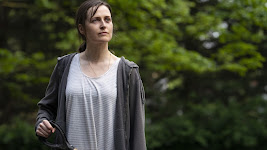 What does work is the central performance of Claire Dunne as Sandra. You see an actress who communicates much with a glance, a look of despair or exasperation. Her performance makes Sandra into not just a survivor but a striver. She has quiet moments where the despair comes through (such as when she laughs at her girls crashing into her on skates when she's clearly distraught at her situation), but on the whole Sandra has gumption.
You admire and cheer for her when she somewhat desperately attempts to convince a bank to let her have a loan by pointing out her building her own home would save the Irish State money in the long run. Her best moments though are at the trial, when she first has something of a breakdown and then pulls herself together to question why no one asks about what Gary did to her but instead focus on whether she filled out a form correctly.
You end up liking and caring about Sandra's plight, which is why the end hit such a sour note with me.
The other performances also are strong. Anderson balances Gary's charms and seductive powers with his cruelty. Walter's Peggy O'Toole also balances a cantankerous manner with a sincere friend. In a smaller role, Sarah Kinlen manages touches of lightness as the eager social worker helping Sandra while later making her a serious character.
Herself is a film I would have liked more if not for the ending. I don't require happy endings all the time, but there seems to be something almost sadistic about the final moments. It simply did not sit well with me, and I think more than a few audience members who may think well of Sandra and Herself will find the end less empowering and more frustrating.
DECISION: D+
Posted by Rick at 2:52 AM