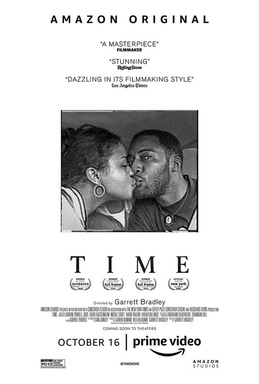 Time, the new Amazon documentary, has in its simple title such a wealth of meaning. Its actually running time is remarkably brief (a mere 81 minutes) but in Time we see the decades roll by, the lost time of one family and the refusal to give into its slow march.

Sibil Fox Richardson (who also goes by the metaphorical nom de guerre Fox Rich) and her high school sweetheart Robert Richardson had a tender love story. They married out of high school and had six sons while starting a business selling hip-hop merchandise in Shreveport, Louisiana. However, their Culture store started faltering and in a wildly misguided step they opted to rob a credit union.

As the driver Sibil agreed to a plea bargain where she served a three year sentence, but Robert received a 60 year sentence for the crime. As such, they faced a lifetime separation. Sibil, however, would not accept what she and her family consider modern-day slavery. For the next twenty years she not only told her story but fought relentlessly to free her husband, all while maintaining a successful car dealership and raising their sons.

The boys grew up with just a cutout of Robert but were motivated by the situation to pursue careers in dentistry and political science. Eventually, Sibil's determined, sometimes frustrated work bore fruit as Robert is released and he can at last return home. 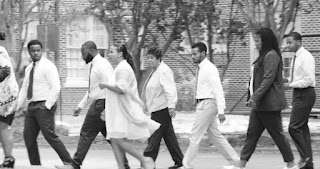 Time is an elegant film, mixing Mrs. Richardson's home videos with new footage by director Garrett Bradley so well that while one notices the difference it is irrelevant to the flow. Bradley was wise to keep the black-and-white tone of the home videos to his footage, allowing for an easier connection.

Time makes its case about the excessive nature of sentencing by focusing on one family's story and how a 60 years sentence was clearly excessive. The film has the viewer not only question whether the punishment fit the crime but on how it affects those left behind. The Richardson's twins Freedom and Justus grew up without a father, being born shortly after Robert's incarceration. It's a terrible punishment for a crime born out of desperation.

By no means does anyone justify or rationalize the credit union robbery, but Time makes its quiet case that Robert should have borne such a heavy punishment. In a sense, while Mrs. Richardson's sentence was shorter due to agreeing to a deal (which her husband did not), there doesn't seem to be a reason for the length of sentence. This is certainly true given how Mrs. Richardson went on to be a successful businesswoman, mother and fierce advocate. 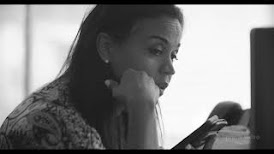 There are scenes in Time that will move the viewer, particularly the ending when Robert is released, enhanced by Jamieson Shaw and Edwin Montgomery's elegant score. Seeing the family reunited, the great love between Robert and Sibil and the cardboard photo of Robert finally burned are all powerful and beautiful moments.

Perhaps we could have done without the suggestion that Robert and Sibil were engaging in sex while on the way back from the prison, but that might be just me.

Time is not quite an advocacy film though it makes a case that sentencing is far too excessive for people who are not threats to society. It is up to the viewer whether or not they agree with Mrs. Richardson's assertion that she is an "abolitionist" fighting modern-day slavery or as her mother observes, "It's almost like slavery times".

These are understandable views, but whether harsh sentencing is motivated solely by racism and poverty is again up to the viewer. Time does not drown us in statistics however, instead keeping our eyes on the impact this has on this family as a stand-in for all the other stories not told.

Still, Time makes a powerful, strong and yet quiet case that in so many cases the punishment does not fit the crime. While positive steps in criminal justice reform are taking place, Time, in its way, suggests so much more needs to be done.

Perhaps what Robert Richardson says to his longtime love once finally home makes the case for Time. Using "Love" as an acronym, it is "Life's Only Valid Expression".