The Dissident: A Review 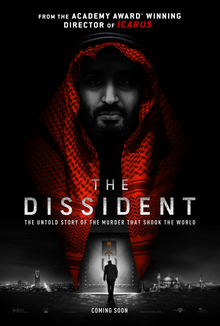 The murder of Saudi journalist Jamal Khashoggi caused a major scandal and damaged the reputation of Saudi Crown Prince Mohammed Bin Salman (aka MBS) as a reformer. The Dissident reveals shocking footage and extensive interviews with those directly affected by Khashoggi's murder, if at times meandering into virtual canonization of the subject.

Jamal Khashoggi was no wild-eyed radical but surprisingly a Saudi insider, one who curried favor with the Saudi government and was seen as if not an ally at least not a threat. It wasn't until Khashoggi began to openly criticize the Saudi royal family and MBS that he drew their ire. Living in exile, he continued his work at the Washington Post and served as mentor to younger Saudis such as YouTube host Omar Abdulaziz Alzahrani.

Khashoggi had also been forced to give up his family but had found love again with a much younger woman, Hatice Cenzig, who was similarly inspired by Khashoggi's activities. It was their engagement that gave the Saudis the excuse to murder him.

Required to go to the Saudi consulate in Istanbul to obtain the necessary paperwork, a group of Saudis were waiting inside to brutally murder and dismember him. These Saudis had close relations with MBS, and after Khashoggi's disappearance the tale of his murder spun into a chaotic mess. The hopes MBS had to be seen as a modern Islamic ruler went by the wayside (though in a post-script it appears he may be working his way towards rehabilitation). Despite the Turkish and U.N. investigations, the Saudis are the only ones to put anyone on trial, and even that was a dubious affair. 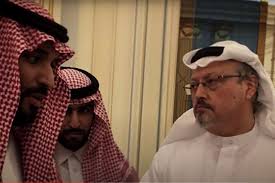 The Dissident makes for compelling viewing, with director Bryan Fogel laying out his case methodically. The film is aided by interviews from the Turkish investigators and in particular to access to their video recordings of their investigation inside the Saudi consulate along with transcripts of the recordings that took place the day of his murder inside the consulate itself. Seeing the footage is revelatory, as is hearing some astonishing details from the investigators. For example, we learn that the Consul General's home ordered 70 pounds of meat from a market, and that such a large quantity was needed so as to cover the smell of a burning corpse.

Some details seem so outlandish they play almost like a bizarre thriller. We learn of body doubles to try and fool people into thinking Khashoggi was still around. There's also among the hitmen a coroner who is an expert in dismembering corpses. It is when The Dissident focuses on the investigation and machinations inside Riyadh palaces that the film becomes intense and gripping.

It is when it starts "humanizing" Khashoggi or going into the younger dissidents that it becomes a bit sleep-inducing. We get a visit by Cenzig to Khashoggi's old apartment where she sits upon his chair and a long segment into their romance. Given the film is close to two hours one wonders whether this becomes at the least a distraction from the main story. At the most, it becomes almost worshipful of Khashoggi, and audiences don't need reminding that he was a human being to feel horror at his killing. 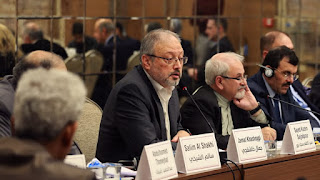 This might be a case of gilding the lily, especially given that when we get to this love story, it almost appears to come from another documentary altogether. The Dissident is not a place where any flaws Khashoggi might have had would play, but it also does have the unintended effect of making him almost too saintly. The brutality and horror of his killing should be enough without going on tangents about his love life.

His support to younger dissidents, while good, at times starts drifting into the dangers they face and less about the execution and botched cover-up. There's a lot of information to unpack, and again at almost two hours it can overwhelm viewers.

Perhaps the weakest or worst aspect of The Dissident is Adam Peters' score. Playing perpetually ominously throughout the film, it is almost going overboard with the "menace" of the entire operation. In this case, less would have been more, versus the thundering danger the music blares out.

Still, these are minor objections to what is a shocking tale of assassination. The Dissent, while perhaps longer than it should be, is still a well-crafted tale that almost plays like a thriller, though sometimes to its detriment.