Anyone going into something as trivial as Half Brothers expecting deep meaning or insight into either family dynamics or current events is asking far too much of it. Half Brothers is meant as thin entertainment, drawing on old plots and stock characters to acceptable results; despite that I think people will be if not charmed by it at least more tolerant of it  than the title characters are to each other.

Renato Murgia (Luis Gerardo Méndez) last saw his father Flavio (Juan Pablo Espinoza) when Flavio went to the United States illegally to work. That was twenty-six years ago, and while Renato has become a successful aerial magnet he is still resentful and bitter. His fiancée Pamela (Pia Watson) urges him to see his father in Chicago after Flavio's second wife contacts him. She is convinced resolving his daddy issues will bring him peace and make him a good stepfather to her son Emilio (Mike A. Salazar), who is creepily obsessed with slasher films.

More irritated than interested, he goes for what he thinks will be a quick trip to a country and its citizens that he hates and has nothing but contempt for. It is here that he has encounters a boorish American whom the uptight Renato soon finds to his horror is his half-brother Asher (Connor Del Rio). After Flavio's death Renato is pushed by Pamela to complete his father's dying request to follow a set of clues that will answer all his questions.

The only negative is that he has to go with Asher, as goofy a goofball as Renato has encountered. This road trip brings the wacky Asher and super-serious Renato into a series of events that involve more clues, rednecks, undocumented Mexicans in cages and a pet goat (not in that order). Hilarity and heartwarming ensue. 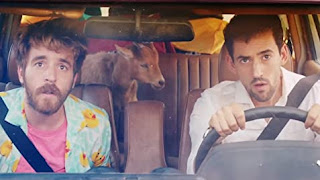 Half Brothers is by no means intelligent or even balanced. Both Asher and Renato are rather unpleasant people whom others would find close to intolerable. The former seems so whacked out it is extraordinary that he isn't on drugs, the latter so intolerant that he veers dangerously close to being more murderous than his future stepson.

As a side note, the efforts at comedy by having Emilio dress up as serial killers from Jason to Hannibal Lecter were not funny but creepy. This was one of the many stabs at comedy Jason Schuman and Emilio Cisneros' screenplay tried that ended up having the opposite effect (no pun intended).

Half Brothers at times decided, primarily through Flavio's story but also with Renato, to try and inject more serious issues about illegal immigration that were forced and heavy-handed, as if the film wanted to disguise things with the hijinks of the Murgia Brothers. It took one out of the film and felt contrived. Not that the entire cross-country trip helps matters.

Then there are moments that literally come out of nowhere. Why exactly Asher opted to take a side trip to a goat farm and steal a goat is never explained. It makes for "wacky" but not for logic. Flavio's new American life is also hit-and-miss (when and why he opted to be "Frank" not "Flavio" but kept "Murgia" seems equally odd), and the method of revealing all to his sons felt almost cruel.

Logic is not Half Brother's strong suit. Does Asher speak or understand Spanish? Sometimes it sounds like he doesn't (mispronouncing Jalisco as "Jah-Lisco" because as he puts it, "there's no H"). Later on however, he is able to not only understand Renato's phone conversation with Pamela where he calls him crazy but repeat it verbatim (albeit with a strong American accent).

Still, at the back of one's mind one has to remember that Half Brothers is not meant to be more than disposable entertainment and to its credit there are some funny moments. A running gag about Americans constantly bringing up zip-lining as the defining Mexican trait is funny, as is a scene where for once Renato gets spoken down to by an airline worker unimpressed with his own nastiness.

And yes, "Renatito" the goat is cute.

I think both Méndez and Del Rio knew the parts they were playing and played them correctly. Méndez played the frustration well as did Del Rio with his near-nuttiness. They were able to rise above the script to sell those few moments of warmth between two disparate people bound by blood. A better script could have played their Odd Couple manner better, and director Luke Greenfield might have done better in asking them to tone it down a bit. On the whole though, both did well given that Renato and Asher were meant to be exaggerated.

As I think on Half Brothers, this is not a bright film, a logical film or even a particularly funny film. However, it is passable if forgettable, and it knows it is not great. It does have the benefit of a few surprisingly tender moments about the failures of fathers and sons to live up to expectations. Those moments actually did move me. Half Brothers is a simple movie that will entertain if one does not think long on or hard on it.