The Godfather Coda: The Death of Michael Corleone. A Review (Review #1435) 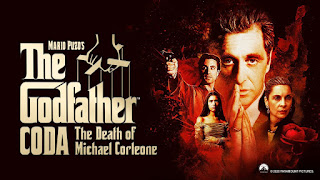 THE GODFATHER CODA: THE DEATH OF MICHAEL CORLEONE

When The Godfather Part III premiered in 1990, both Godfather fans and the general public were indifferent to downright hostile. The film seemed a poor way to end the saga, a jumbled mess with a now-notorious performance and a general sense of boredom. Thirty years on, director Francis Ford Coppola was able to revisit his infamous flop and attempt to put it as close to how he would have preferred. The Godfather Coda: The Death of Michael Corleone can do only so much given that Coppola was working with what he had. However, the changes show that The Godfather Part III could have been if not the equal to its predecessors at least an honorable effort.

The Godfather Coda stays with the plot of Godfather III in that Michael Corleone (Al Pacino) is finalizing his plans to be completely legitimate but still can't break away from the mob life. In particular is the deal with shady Vatican Bank Archbishop Gilday (Donal Donnelly) for the Immobilare Corporation. In exchange for covering a $600 million shortfall at the Vatican Bank, Michael will get control of Immobiliare.

While Michael's son Anthony (Franc D'Ambrosio) wants no part of the family business and wants to pursue opera, Michael's illegitimate nephew Vincent Mancini (Andy Garcia) does. He especially wants to take on Joey Zasa (Joe Mantegna), whose taken over the Corleone territory but not doing a good job in Vincent's eyes. Michael's daughter Mary (Sofia Coppola) wants Michael too, for carnal pleasures despite being first cousins.

As the Immobiliare deal moves along, both machinations within and without the Vatican threaten to eliminate Michael financially and physically. He must not only work to save his empire and let Vincent become the new Head of the Family but find absolution for his past sins. That absolution, if it comes at all, will be with a very heavy and personal price. 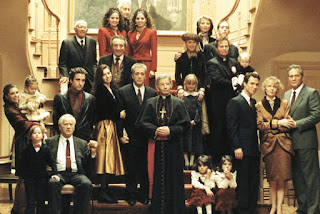 As I stated, Francis Ford Coppola could really do only so much. He had to work with the material he had, limiting his ultimate vision of what The Godfather Part III could have been. However, the work he did has altered, at least for me, how I see the concluding part of this saga.

I think one of the positives in The Godfather Coda is its structure. The film now seems less convoluted and confusing. The "new opening" is with the backroom deals that Michael has with Gilroy, where in the original that takes place well within the story. Now, instead of appearing almost out of nowhere we see that The Godfather Coda will center around the Immobiliare scheme, giving the film a purpose versus just seeming to throw things at us and hoping audiences sort things out.

Another change was that Connie (Talia Shire) was less Lucrezia Borgia and more Connie Corleone. In The Godfather Part III, Connie seemed to take on a more active role in the plotting, becoming the de facto Godmother. Now, while still involved in the family business she is not the primary instigator. Gone is the scene where she tells Vincent to kill Zasa or plots to kill her own godfather Don Altobello (Eli Wallach). Again, it's difficult to near impossible to change her Machiavellian ways, but Godfather Coda cut down on that curious thread.

There were other changes such as cutting down on Altobello and Michael, who seemed to be wastes of time to me. Other changes in sound (such as hearing slot machines when The Commission meets in Atlantic City) or dialogue (showing Vincent was orchestrating the mass executions of their enemies) gave the film in my view not just more structure but greater depth, comprehension and cohesion. 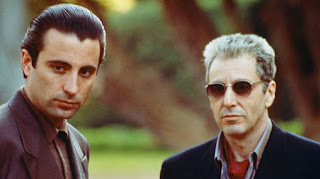 Perhaps the biggest change, at least that I can remember, is when Michael suffers his diabetic stroke. In The Godfather Part III, it was shorter and more direct. Here, it's not only longer but more tragic, at one point Michael calling out "Fredo!", an admission of his tremendous guilt over killing his own brother.

As for the "new ending", it was as good as Coppola could make without literally reshooting the sequence. Again, he had to work with what he had, and while perhaps it would be impossible to give Michael a proper send-off I think The Godfather Coda gave him a more respectable one that what he got in The Godfather Part III.

In terms of acting pretty much what was true then is true now: Sofia Coppola is terrible, Andy Garcia is great.

The Godfather Coda: The Death of Michael Corleone will probably be as close to what Francis Ford Coppola can get to making what he would have wanted as the end to The Godfather Saga. If I were recommending the saga to newcomers, I would recommend they watch The Godfather Coda rather than Godfather Part III, or at least see Coda first. I think they would find it if not a satisfying conclusion, at least a much better and coherent one. Only those who have not seen Godfather III will be able to fully judge how The Godfather Coda works or doesn't, but here we see a film, stripped from all the bad press and poor reputation, that could have been better than what we ultimately got.