Dick Johnson Is Dead: A Review

DICK JOHNSON IS DEAD
The old saying goes "Dying is easy. Comedy is hard". I think Dick Johnson is Dead wants us to believe that dying can have a bit of humor, albeit a dark one. This film, part documentary, part fantasy, delves into the lighter side of mortality while also touching on both its inevitability and its emotional toll.
Psychiatrist C. Richard Johnson's documentary filmmaker daughter Kirsten chronicles her father slowly succumbing to his Alzheimer's in a most unique way. She convinces her affable father to participate in going through a series of staged deaths as well as imagining what Heaven will be like. Dr. Johnson, who is a Seventh-Day Adventist, happily goes along with scenes where younger versions of himself and his late wife Catherine Jo dance (apparently with a slightly disapproving Jesus watching).
The Heavenly and death recreations at times amuse, at times puzzle Dr. Johnson, though his faux-funeral seems to delight the man. His growing dementia however forces changes to his life however. He retires from his psychiatric practice and move from his Seattle home to his daughter's apartment. It's mostly all jolly and lighthearted until June 23, 2019, when we get not one but two twists involving cardiac arrests and funerals. To say more would be too much but let's just say we get some resurrections along the way. 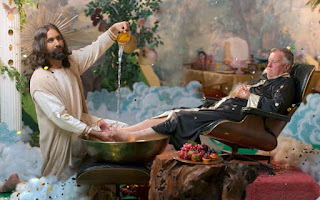 Dick Johnson is Dead is a film that looks at more than just the inevitable decline and death of a parent. It is a love letter between father and daughter, where the genial Dick goes along with whatever Kirsten asks of him in a cheerful manner. Whether it's having Christ heal a toe deformity he's been embarrassed over or let her stage him bleeding to death on the New York City streets, Dick seems almost delighted with it all.
One senses his pride in his daughter, if perhaps a bit of puzzlement at times. He seems cheerfully but momentarily worried about that bleeding scene, thinking that perhaps they will be using real blood or even his own as part of the stunt. It takes a bit to explain that it is fake blood. While he laughs at it all, this leads to a few issues in the film.
Dick Johnson had been suffering from dementia for some time: Kirsten in voiceover tells us he had been double-booking patients and once drove through a construction site at high speed unaware, arriving home with four flat tires. Later on the film, we hear her conversations with him, where she calmly tells him that he had gotten up very early and mistook the living room for his office, thinking he was going to see a patient.
As such, exactly how fully aware Dr. Johnson was of the goings-on in Dick Johnson is Dead, as well as whether he was in full control to give consent, is unclear. Kirsten Johnson herself remarks to a new nurse that she doesn't want to go beyond what her father would find comfortable, so she is aware that there is a risk of taking things too far. However, from the looks of it, it looks like Dr. Johnson is going along with all the wackiness to make her happy. 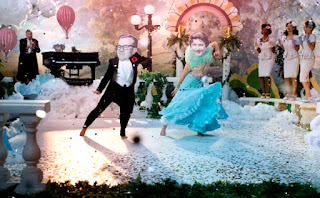 Another issue, and a larger one for me, was the set of twists built around June 23, 2019, which is shortly after Dr. Johnson's 86th birthday celebration. It looks one way but turns out another, which would give audiences a surprise but for me looks slightly manipulative and even twisted.
For full disclosure, it may be that because I lost my mother this year, sights of ambulances and funerals hit too close to home now. That we get twists for the Johnsons that are impossible for me perhaps puts an edge to my mix of discomfort to even anger at it all.
One, however, can see what Kirsten Johnson is going for in Dick Johnson is Dead. She is attempting to reconcile her own reactions to her beloved father's inevitable descent into something both manageable and even humorous. In doing so, she is attempting to speak for all of us who face our parents fading away either through physical or mental separation. It's a noble sentiment, done with some dark humor and genuine affection for the almost perpetually jolly Dr. Johnson.

You sense that Dr. Johnson is a nice, pleasant, jolly fellow, but also one who is aware of what is to come (his late wife having suffered with Alzheimer's too). At one particularly poignant moment, he tells his daughter that he is more like a little brother to her now, forever tagging along and causing trouble. "I'm your little brother, who is demented," he tells her, and it's hard not to be moved by their dual recognition of the fate that awaits them.
Perhaps because I buried my parent this year I was not as amused as others were in Dick Johnson is Dead. I wasn't the only one: one of Dr. Johnson's best friends is seen openly weeping after giving a faux-eulogy despite knowing Dick Johnson is not dead. The thought of this separation, this loss, even in play, was too much for him. Dick Johnson is Dead may not be for everyone, perhaps finding the reenactments far too cutesy and moving away from documentary into fantasy. However, it is a loving portrait of father and daughters, of their love for each other and a way to accept death on their own terms.
DECISION: B-