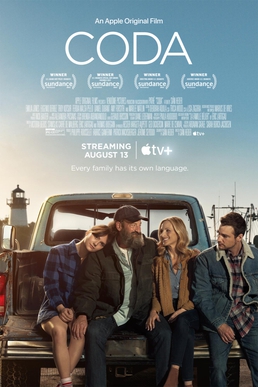 In some ways, CODA is not original separate from the fact that it is an English-language remake of a French film. Despite that, CODA is a deeply moving, beautiful film that is in turns funny and dramatic.

Ruby Rossi (Emilia Jones) is a CODA: Child Of Deaf Adults. She is also the only hearing member of her family, making her the de facto interpreter for them. Her father Frank (Troy Kostur) and brother Leo (Daniel Durant) are struggling fishermen, while her mother Jackie (Marlee Matlin) generally hides away from the world and manages the family finances.

Ruby has two secret loves: music and Miles (Ferdia Walsh-Peelo). Her crush is so great that she joins the choir despite being painfully shy about singing in public. Enter wacky choir director Bernardo Villalobos (Eugenio Derbez), who pushes the kids to literally sing out. He also pushes Ruby to reach her potential and does a little accidental matchmaking by pairing Ruby and Miles for a duet.

Ruby is facing pressures on all sides. Her parents, randy and somewhat uncouth, do not shrink from sex both in having it loudly and discussing it to a shocked Miles. They also face financial pressures to where the Rossis decide to go co-op rather than endure the regulations and poor market. That only increases the pressure on Ruby to keep interpreting. Will familial bonds force Ruby to give up on dreams her family cannot partake in? Will she and Miles form a bond? 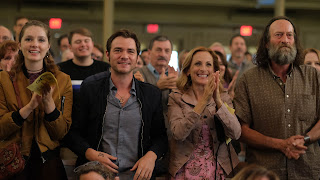 As I said, in many ways CODA hits familiar beats. It is not a surprise that Ruby opted to take a day for herself with Miles the same day a pesky observer boards the Rossi's ship, revealing they have no one to hear emergency messages or the Coast Guard. The push-pull between a loving but unintentionally binding family and the young girl's own desires is also familiar ground. There's the montage of the Rossis integrating into the hearing world they have mostly kept separate from (Jackie for example laughing with the other fishermen's wives while they do some signing). Then there's the somewhat wacky teacher, who gives the kids Let's Get It On to sing and accidentally signs "It's a pleasure to f*** you" to Frank and Jackie. Given how sexual they are, I was a bit surprised they didn't laugh it off.

However, CODA has extremely moving and intelligent moments that hit the viewer. There is the concert where Ruby showcases her skills. Her family cannot hear the concert, but the reactions Kotsur and Matlin show when looking around how their daughter moves the hearing audience is a joyful moment. As CODA shifts to their perspective, we can focus on the pride and joy their daughter/sister is bringing to others. Seeing them mirror the audience in their standing ovation while still making the sign for "applause" is a beautiful moment. 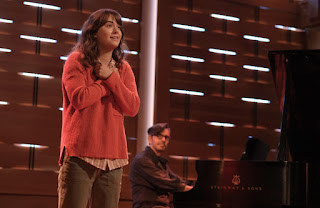 I found it hard not to shed a few tears when Frank, Jackie and Leo sneak into Ruby's audition and she, seeing them, begins singing and signing Both Sides Now.

Here is where the cleverness of CODA comes from through via writer/director Sian Heder's adaptation of the French film La Famille Belier. As she sees her family, as she contemplates how she loves them but also is separate from them, she has "seen love from both sides now". She has seen it from the hearing and from the deaf world. Heder gives the song an additional meaning that I figure Joni Mitchell had in mind.

Heder gives us little details that make CODA a life-affirming comedy. There's Ruby's deliberate misinterpreting to her parents that the doctor's orders of no sex for two weeks are really no sex ever. There's Frank signing his advice on condoms to Miles, who both clearly understands without needing interpretation and is quite embarrassed. However, there are other moments, beautiful moments that make CODA a delight. 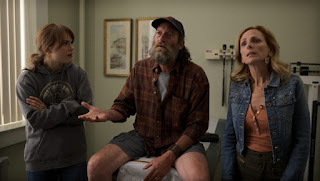 After the concert, Frank asks Ruby to sing the song she sang with Miles. As he puts his hands on her vocal cords to feel, the man who loves gangster rap because of the bass shows his pride in his little girl. Despite saying only one word in the film, "Go", Kotsur clearly earned that Best Supporting Actor nomination. In turns raunchy and proud, he is proudly working class, loving his family but also uncouth.

Matlin's equally randy but loving Jackie is also an excellent performance. She is able to handle the comedy such as when telling Ruby that Leo's Tinder scrolling is fine at the dining table because it is something the whole family can do. She also can deliver beautiful moments, explaining that she originally wished Ruby had been deaf, fearing that the difference between them would make for a fraught relationship. Durant is excellent as Leo: in turns angry at being seen as helpless without Ruby but also quietly proud of her.

CODA clearly is Emilia Jones' film. As Ruby, she was brilliant; in turns fearful and loving, she can express defensiveness when outsiders do anything against her family but also frustration at how they bind her down. Ruby would naturally be upset that her music lessons would be thwarted by a television interview she was told about at the last minute. That her parents appear puzzled as to why Ruby would put her own dreams over them adds a layer of drama and relatability to her plight. Separate from the deafness, many children feel their parents love sometimes becomes more a burden than blessing.

CODA is a beautiful film: funny, heartwarming if a bit standard in how things will play out. That however is not a negative, for CODA plays well in how life can be, with the layer of a world most of us do not know.

We really don't know love and life after all until we have seen them from Both Sides Now.