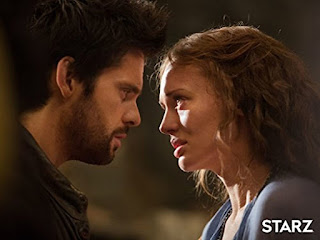 We now conclude Season One of Da Vinci's Demons with The Lovers, getting our first taste of a shocking historic event.

The search for the mythical Book of Leaves was set into motion long before Leonardo da Vinci (Tom Riley) was born, but the Sons of Mithras have had their eyes set on him. Now that he is a grown man, he must choose to follow the path of esoteric wisdom. This does not, however, bode well for his current patrons, the Medici family. Lorenzo de Medici (Elliot Cowan) is irritated that his younger brother Guiliano (Tom Bateman) has not appeared for the forced engagement party to join the Medici and Pazzi families.

Lorenzo is unaware that Guiliano has been stabbed by Lorenzo's mistress Lucrezia (Laura Haddock), who is also a spy for the Vatican. Surprisingly, Guiliano survives and stumbles his way back to Florence. He is found by Dragonetti (Ian Pirie), Captain of the Night Guard who appears to be in league with the Pazzi. Is Guiliano safe in his care? What about Vanessa (Hera Hilmar), who discovers she is carrying Guiliano's child? The Pazzi will not wait for Guiliano or Rome. They decide the best thing to do is have a coup d'état and eliminate both brothers simultaneously. This will be accomplished through a blasphemous act: to kill them both at Easter service, with perhaps killing Lorenzo's three daughters and wife Clarice (Lara Pulver) too for good measure.

Will Leonardo sail to unknown lands as instructed by the Sons of Mithras? Or will he sacrifice that to save the Medicis from extermination? It culminates in Florence's own murders in the cathedral, where an enraged Riario (Blake Ritson) joins the slaughter while Lucrezia helps Clarice and her girls to escape. Here, when Lorenzo has seen his brother killed and is himself in mortal danger, he bizarrely focuses on the potential that Lucrezia and Leonardo were lovers, apparently angrier at his artist fooling around with his mistress than with the Pope's nephew about to blow them both away. 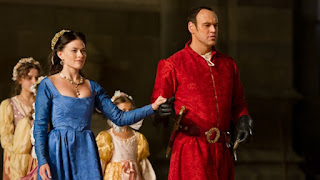 It wouldn't be Da Vinci's Demons without some kind of bonkers situation, and The Lovers gives it to us with the Pazzi Conspiracy (though more than likely an ahistorical version). Most of the episode does not flag in its pacing and story, moving things quickly from Guiliano's dilemma to the Pazzi conspiracy and culminating in a wild free-for-all at the cathedral.

We get wild turns all over the place: Leo storming in to save Lorenzo! The mysterious papal prisoner is really His Holiness' own brother! Vanessa tearfully telling a dying Guiliano that his line will continue as she is with child! Riario for once going full-on bonkers! Leo and Lorenzo trapped as the Pazzis and Romans are blasting their way through their safe room!

The Lovers is brimming with action, and it also has strong performances from Riley and Haddock as our thwarted lovers. Leo's fury and Lucrezia's regrets blend perfectly, making this a most tangled romance. Ritson too is released to go all wild, crazed fury, making his rage all the more frightening. For the entirety of Da Vinci's Demons, Ritson has played Riario as a calm figure, rarely if ever speaking above a soft tone. Here, however, he is shouting with manic force, the seething pent-up rage finally allowing him to devour the scenery the way others have.

The Lovers does what a great season finale should do: leave audiences hanging on a wild note.

Next: The Complete First Season