100 Years of Men in Love: The Accidental Collection. The Television Documentary 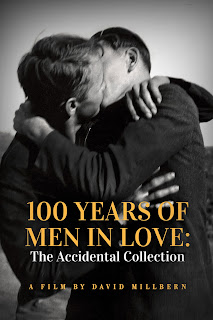 100 YEARS OF MEN IN LOVE: THE ACCIDENTAL COLLECTION

There may have been once a love that dare not speak its name, but said love dared to be photographed. 100 Years of Men in Love: The Accidental Collection, based on the book Loving: A Photographic History of Men in Love 1850s-1950s, is brief and perhaps a bit dry. However, it is a good primer to this somewhat hidden world of men who went surprisingly far in revealing their same-sex attraction long before Stonewall burst gay life out into the open.

Longterm partners Hugh Nini and Neal Treadwell came upon a curious photograph in an antique shop: two men in what appeared to be suggesting they were more than friends. They became intrigued by the idea that long before the openness about homosexuality, gay men could or would be daring enough to be pictured with their romantic or life partners. From that one picture, Nini and Treadwell began scouring antique shops searching for this lost history and reclaiming it.

A knowing glance, a hand on a leg, two bodies close together, sometimes in bed, down to men locking lips. Here was a hereto unknown world, one where a man could not only express love towards another man but be willing to be captured forever on film doing so. As we go hither and yon from 1870 to World War II, the photographs sometimes speak for themselves.

Others, however, are not as clear cut, and here is where 100 Years of Men in Love may be flawed. While some of the photographs have writings on the back that strongly indicate the subjects were lovers, most do not. As such, it is impossible to verify exactly what the nature of the relationship was between them.

Were they long-term partners? Were they briefly lovers? Was it a one-sided love affair? Were they really heterosexuals? I think Nini and Tredwell are aware that there is an ambiguity in that we are not privy to the majority of the backstories. They acknowledge as much when they mention at the end that they have levels or degrees of certainty. There is a no ambiguity when the photo has two men kissing each other, but when I saw some of the photographs, I did not get the sense that the men were lovers or even same sex attracted.

One well-known photograph series is of two young men who hold up a sign stating, "Not married but willing to be". The suggestion is that the two men want to marry each other, but is that the case? One can also draw a conclusion that they are offering themselves to women. Another photograph from their session does suggest the subjects were more than friends, but outside of a seance there is no way to know for sure.

As a side note, the images of the famous gay lovers Oscar Wilde and Lord Alfred Douglas that I have seen hardly suggest the ardent passion between them.

Even those photos that have inscriptions can have ambiguous meanings. One read "George Thompson and a buddy, 1940. Here's one of both of us before we were...well, you know". Therein lies the issue: we don't know. We can think their relationship went beyond friendship, but could it not also mean "before I came out to him, and he said No"? Could it not also mean "before we had a falling out"?

Other images, such as the ones the film suggests was the first same-sex wedding, may not be as the photographer and subjects intended.

I did wonder if perhaps we are applying 21st Century ideas to 19th Century images. In the same way that the now-controversial photos Lewis Carroll took of children are seen by some as de facto child pornography, could some of these photographs now interpreted as revealing same-sex love be nothing more than good friends reflecting the ideas of their time?

We will probably never get a definite answer to that.

However, 100 Years of Men in Love has some striking images that are practically pieces of art. We even learn that the selfie is not a new idea: a 1902 photograph of two men was done in such a way as to allow the subjects to see themselves as they were photographing themselves.

Another interesting point is how many of the photographs have the subjects under umbrellas. Nini and Treadwell wonder whether umbrellas were a hidden sign for gay, the rainbow flag of the era so to speak.

100 Years of Men in Love: The Accidental Collection does at times play like a commercial for the Loving book. It is unfortunate that a long segment about a closeted World War II veteran who had a long-term relationship with a fellow soldier he met while serving did not have that soldier's family speak. It would be interesting to get more than these faces and learn about their lives.

On the whole though, 100 Years of Men in Love: The Accidental Collection has some beautiful images and does touch on how love between two men has never been truly hidden, merely obscured.