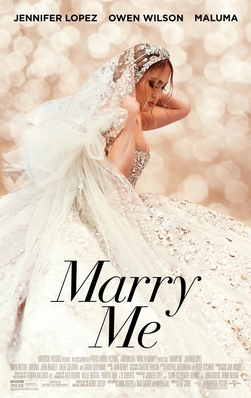 Music superstar Kat Valdez (Jennifer Lopez) is set to marry fellow music superstar Bastian (Maluma) live in concert after singing their new smash hit Marry Me. Math teacher Charlie Gilbert (Owen Wilson) has the vaguest of ideas who Kat Valdez is. He, however, is roped into going to this concert/wedding for his daughter Lou's (Chloe Coleman) sake.

Just as J-Lo, or Kat, is about to take the stage in a lavish wedding dress, she finds out via social media that Bastian had a fling with her personal assistant. Devastated, she begins rambling until she spots a man holding a "Marry Me" sign and agrees to marry him instead. That man? Charlie.

For reasons Charlie agrees to the charade of a marriage while he and Kat attempt to sort out their lives. It should not come as a surprise what happens to Mr. and Mrs. Valdez as their worlds clash: she of perpetual media exposure, he who is so disdainful of social media he still has a flip phone and rarely checks his email. Things culminate when Kat has to decide whether to sing with Bastian when Marry Me receives a Grammy nomination or go to the Mathalon in Peoria to support Charlie and Lou. 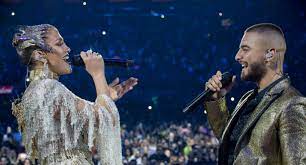 I think I was misled when it came to Marry Me. I was led to think it was an abomination. I found it to be merely inept but harmless. Is it preposterous down to bizarre? Yes. Is it poorly acted? Pretty much. Is it in some ways downright creepy? Also, yes. Despite that, I still did not hate Marry Me, even if at least one thing was a bit of a sticking point.

Maluma is 28. Jennifer Lopez is 52. Marry Me is asking us to accept that Bastian is hot and heavy with a woman old enough to be his mother.  I would find the age gap creepy if Maluma were 52 and J-Lo 28, and I imagine there might be more criticism on that matter if the ages were reversed. I do not know if having the woman be older than the man makes things better, but it does stretch believability to something already pretty preposterous.

For the record, Owen Wilson is 53.

What I found in Marry Me is dumb escapism that had the opportunity to be more than what it ended up being, but not a nightmare to sit through. In fact, if you accept the preposterous premise and do not bother to think on things, you could enjoy Marry Me for its cliches and lack of thought.

This comes through in the performances. In what might be a curious criticism, Jennifer Lopez seems too smart to play Kat with any sense of seriousness. Part of it comes from the John Rogers, Tami Sagher and Harper Dill adaptation of Bobby Crosby's graphic novel. Sometimes Kat is sensible and realistic, such as when she attends a school dance with Charlie. Other times she is a blinking idiot: when arriving at Peoria, she is astonished to find no car waiting for her. 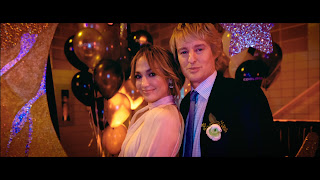 I do not know why Kat's apparent inability to function without flunkies keeps getting brought up but given that she is more than capable of making business decisions solo it does not make sense to make her sometimes into an airhead. Moreover, Lopez overplays the comedy bits, exaggerating things to unbelievable levels.

Add to that the idea that "Kat" is pretty much the "J-Lo" persona and one wonders whether the real J-Lo was used to the best of her abilities.

Wilson does not shift from his apparent dazed and confused persona either. Charlie at times can come off as cruel and contemptuous of Kat, dismissing her work and constant media presence without realizing that for her, it is all part of her career.  Maluma is not an actor, and I will be frank in that like Charlie, I have the vaguest idea who he is. As he was not called on to do much other than sing and talk, he did well in both of those.

Marry Me is not terrible. It is dumb, implausible and more than a bit absurd. However, like Kat, it only wants to be loved. I genuinely could think of films I found less than entertaining, even some held up as a turning point in cinema. By no means "good", Marry Me is not "bad" enough for me to dislike. I would say it is a bad romp, but a romp in any case. If you do not ask much of it, you can get through Marry Me with mild enjoyment.