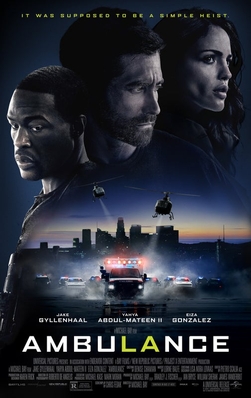 As far as popcorn films go, Ambulance is decent enough fare. This is not damning with faint praise: I was entertained by Ambulance, even if it was longer than it should have been and had bits that were both predictable and illogical.

Iraq war veteran Will Sharp (Yahya Abdul-Mateen II) is facing hard economic times, without a job and mounting medical bills coming his way. To earn some quick money, he goes to his "brother" Danny (Jake Gyllenhaal), a master criminal about to embark on his biggest banking heist ever: $32 million in a meticulously planned robbery.

Of course, even the most meticulously planned robbery will inevitably have a hitch, and that hitch is from rookie Officer Zach (Jackson White), who has been persuaded to go to that bank to get a teller's phone number. From this moment, the bank robbery spins into total chaos, more so when Zach is shot. The ambulance run by cynical but professional Cam Thompson (Eiza Gonzalez) and rookie Scott (Colin Woddell) attempts to help Zach, but Danny sees it as their way out.

From here, Ambulance becomes a frenetic chase involving the local police, Mexican criminals, the FBI and the media. As Danny and Will attempt to find a way out of their predicament, Cam attempts to keep Zach alive, and Danny's FBI frenemy Agent Clark (Keir O'Donnell) attempts to capture them with the reluctant assistance of LAPD Captain Monroe (Garrett Dillahunt), the all-day chase has various people dying amidst the chaos and carnage. 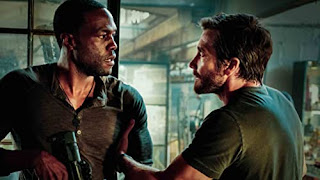 I do not think a film has embraced its gleeful level of destruction as much as Ambulance. Chris Fedak's adaptation of the Danish film Ambulancen does not waste time giving us in-depth details about the myriad of characters zooming and zipping along. Instead, we get the core basics via visuals and dialogue.

We know Will is facing financial hardship and family health issues via the bills and his inability to reach a person to talk to on the phone. We know Cam is professional but aloof through her demeanor with the patients and her latest EMT partner. We know Zach is a rather shy, bumbling man from how he interacts with his partner and the cute teller he's got his eye on. As such, we are free to focus on what Ambulance thinks is the important thing: the action.

I am neither a Michael Bay fan nor hater. While suffering through Hour Two of Pearl Harbor, I was rooting for the Japanese, but thought highly of 13 Hours: The Secret Soldiers of Benghazi. I think it is important to judge a film based on what it is trying to do, hence my hatred for Pearl Harbor and love for 13 Hours. Ambulance is meant to be a wild action film where things go from Point A to Point B. 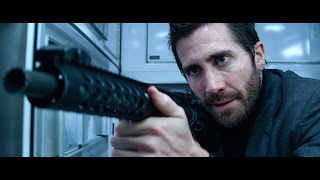 It succeeds in that effort, so it is an entertaining film. I can't go so far as to say it is a good film, but it is an entertaining one. Ambulance goes for broke in the action department, throwing all sorts of explosions and shoot-outs with naked abandon. These are enhanced by the camera work, which delights in flying all around with surprisingly impressive shots.

The frantic style in Ambulance shows in Gyllenhaal's performance. Here, he devours the scenery with a manic, crazed glee. We find no subtlety or restraint to Danny. Gyllenhaal embraces the crazed manner with joy in a performance I found weirdly captivating. To be fair both Abdul-Mateen and Gonzalez did work hard to be a bit more grounded, even if grounded is one thing Ambulance is not. Nevertheless, they kept things from spinning into full-on camp.

It is interesting that O'Donnell's Agent Clark is gay without it being a major issue. We first see him in couples therapy with his partner, and he casually mentions that fact when asked where he was. In Ambulance, we have that call for "representation" answered but with it being only an aspect of O'Donnell's life, not the sum total of it.

That positive, however, is countered with the continued use of Hispanic characters being criminals. It would have been nice to see Latinos not shown as gang members, so there is that. We also have the issue with length and logic. In the former, Ambulance seems to go on longer than it should as we get certain familiar beats (the final confrontations, the person who comes closest to killing Will). In the latter, I kept wondering why after fooling the LAPD and FBI, Danny and Will opted to keep Cam and Zach hostage rather than escaping and letting them go.

Other parts, like men in their forties claiming not to know who "Doogie Howser" is, and a Christopher Cross Sailing singalong are not funny but dumb.

All things being fair, I think people will enjoy Ambulance as good entertainment that just wants to bathe us in blood and action.