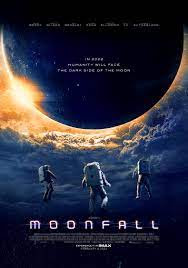 Even by the schlocky standards that Moonfall is aiming at, I found that if not for one fatal flaw, I would have been able to forgive much. However, Moonfall went one step too far in its horrible execution that I could not forgive.

Ten years after a space accident that got a fellow astronaut killed, disgraced former astronaut Brian Harper (Patrick Wilson) is broke, depressed and barely hanging on. His now-adult son Sonny (Charlie Plummer) is in jail, but while Sonny's mother Brenda (Carolina Bartczak) frets, Sonny's stepfather Tom Lopez (Michael Pena) is not too concerned.

Brian's former astronaut partner Jocinda Fowler (Halle Berry) could not verify his story that they were attacked from something versus the accident being Brian's fault. She, however, has stayed on at NASA and has her own problems domestic and galactic. The galactic ones are bigger due to the Moon starting to shift orbit.

This was seen by eccentric science aficionado KC Houseman (John Bradley), who is convinced that the Moon is really a hollow superstructure. Turns out, he's right. Now KC, Brian and Jo join forces to fight the evil sentient machines bent on destroying humanity through the Moon. All this while we pop into the chaos the Earth is enduring, along with the various domestic issues that Houseman, Fowler and Harper face on our lonely planet. I think that Moonfall took some inspiration from Ancient Aliens given that we discover that humans are descendants of aliens who planted us here. Again, I have to think that no one involved with Moonfall expects us to take any of this seriously. At least I suspect that is the case given how director/cowriter Roland Emmerich (writing with Harald Kloser and Spencer Cohen) crafted the film.

How else to explain a character say, "The Moon is going to help us!" without having audiences or actors burst out laughing. I genuinely cannot remember if this was said by Jo or KC, and to a point it does matter. KC is meant as the comic relief: the somewhat socially inept conspiracy theorist who takes selfies of himself in space and named his cat "Fuzz Aldrin". If he says, "The Moon is going to help us!", it keeps to his wackiness.

However, if it is Jo who said it (and my memory says so), it just makes poor Halle Berry look foolish. Granted, I think she knew Moonfall was schlock and decided to try and make it a drama anyway. I do, however, feel that given her performance she could not muster any enthusiasm for either leaning in on Moonfall's goofy camp element or going all-in on making this remotely serious.

It almost looked like she knew she was trapped in trash and just wanted to get through it.

Patrick Wilson is someone I am despairing for. I do think he has talent, but now I think his primary acting style consists of looking forever confused. 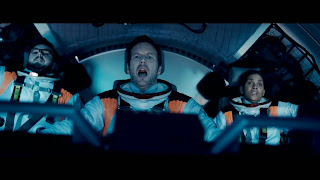 This, coincidentally, is the second film with John Bradley that I have seen in as many days (he played Jennifer Lopez's manager in Marry Me). At least here he had more to do and embraced the apparently looney but endearing Houseman. He, for whatever faults Moonfall has, at least played it like a comedy.

The unfortunate thing is that Moonfall itself did not know whether to lean in on the camp or work to play any of this seriously. It was becoming more and more laughable that Harper and crew kept meeting one disaster after another. These guys simply could not catch a break. The same can be said for the various figures left on Earth: Houseman's elderly Alzheimer's affected mother, Jo's young son, Brian's adult son, Sonny's stepfamily.

No matter the circumstance, things simply never went right for any of them. Moonfall throws in pretty useless moments such as crazed survivalists that probably wandered off Greenland and a space race that was left over from Geostorm. Yes, the latter was awful but at least I could laugh at it. The former was bad but at least it made an effort.

Moonfall did neither: not funny enough to laugh at/with, not making an effort to move past the awful cliches and bad performances. Not one of the actors save perhaps for Bradley were bothering with this, and most look embarrassed to be there. Some of the actors, fortunately were there so briefly that their deaths had no impact.

Not since I was asked to cry over a brontosaurus left to die on a pier in Jurassic World: Fallen Kingdom have I found efforts to make me cry so wildly misguided. 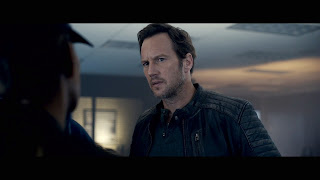 As dumb and illogical as Moonfall was, I was ready to forgive most its flaws to be more charitable. Then it happened: the bane of my cinematic experiences. It hinted that there would be a sequel.

That, I could not forgive or forget. I despise whenever a film suggests there will be a sequel. This is not like Dune, when I already know the story is so massive that a sequel was more than likely. This is something else: a vain, arrogant suggestion that I would not only endure this idiocy but that I would want more of this idiocy.

It was at that point that I threw my hands up in the air and said, "No, No, No". There really is nothing in Moonfall to recommend a second helping. There's hardly anything to recommend a first helping for that matter.

The effects were cheap looking, there is no sense of urgency in what is meant to be a literal life-or-death crisis, secondary characters came and went with nary a rhyme or reason, and the main characters were dull as dishwater save perhaps for Bradley's Houseman.

Moonfall plays like a bad SyFy Channel production without the wink-wink manner that could make it worth the time. I know people can enjoy Moonfall given how the very small audience applauded the end. However, now I wonder if they applauded it because it was over.