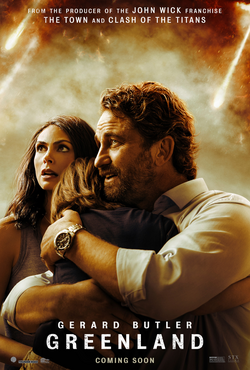 For better or worse, Gerard Butler is now the default guy for a disaster movie, intentional or not. Greenland is beyond Butler's usual work of battling the elements in that it tries for a more grounded approach. Whether he or anyone involved in Greenland is really up to the task is up to the viewer.

Scottish structural engineer John Garrity (Gerard Butler) receives a strange text message saying he and his immediate family have been selected to be sheltered. Sheltered from what? More than likely from "Clarke", a massive comet that the government assures the public will cause minimal if any damage when bits of it enter our atmosphere.

In reality, Clarke's chunks will destroy whole cities, with one of them being an extinction-level piece that will destroy most Earth life as we know it. Only a chosen few however will be safely tucked away in secret mines. Clarke's arrival comes at the worst time though: John and his estranged wife Allison's (Morena Baccarin) birthday party for their son Nathan (Roger Dale Floyd).

Forced to leave their friends and neighbors behind, the Garritys soon enter a maelstrom of epic proportions. Separated when Nathan accidentally leaves his insulin in their truck, they are separated more when the military base is overrun by desperate people. Even more separation occurs when misguided good Samaritans kidnap Nathan and leave Allison stranded on the highway.

Eventually they all reunite and head to Allison's father's ranch, where her father Dale (Scott Glen) provides provisions for them to go to Canada. John on his travels that flights there are headed to their original destination: Greenland. John must take the originally assigned group there to make it, even though Nathan had been denied their original flight because of his diabetes. More struggles ensue until they reach the safety of Greenland. 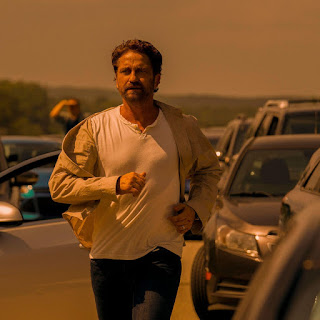 Greenland moves away from the usual sci-fi/action films Butler's limited acting can do, so one gives him begrudging respect for at least attempting to move for something that gives his character more than a weapon to fight with. We don't get much daring-do with his John Garrity, but we also don't get much introspection from him either. Butler manages to hit the required beats (loving father, repentant husband) with some surprisingly muddled action sequences.

Why exactly rednecks would declare this Scottish brogued man "unqualified" for rescue is I suppose some commentary about "immigrants" getting things "regular" Americans can't, but perhaps that is giving Chris Sparling's screenplay too much credit.

Sparling however does set himself up for a peculiar scenario. If those with any kind of diseases were rejected for rescuing, why then did they initially include Nathan in the selected group? Was the government unaware that Nathan had diabetes? Surely they would have done massive background checks on the Garritys, so if Nathan's diabetes was a reason for exclusion, why pick them at all? Why wouldn't they just select a structural engineer with either no family or one that didn't have any diseases?

His script also can't shift away from certain clichés, such as the rocky marriage that can be fixed apparently only by an extinction-level meteor. Then there's the matter of the insulin being lost, and you sense that Greenland isn't even trying to find new ground.

In certain ways, Greenland teeters towards parody due to situations like those, which are stabs at character development but don't go deep or far. The various separations look they were cribbed from the Pomp & Circumstance section of Fantasia 2000, making John and Allison the Donald and Daisy Duck of Greenland.

A great deal of the acting is also unsteady. To be fair, Baccarin didn't have much of a character to play, the neglected/cheated-on wife who eventually finds love again. Again, the performances pushed Greenland into being almost a spoof of disaster films: seven minutes in and I was rooting for Clarke. 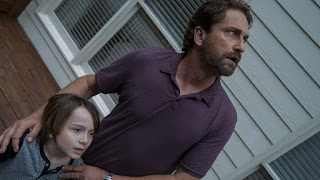 Butler has almost never bothered to act in his career, letting his massive frame and Scottish growl build his cinematic career for him. Greenland isn't an exception, though at least he made that effort to make John less action hero and more "ordinary man caught up in extraordinary circumstances". It didn't quite work, but he gets a B for effort.

The special effects weren't grand or imposing given the situation. Serviceable is the best word for them.

However, as the film progressed I found if not interest in Greenland as much as a mild respect for them at least making the effort for a more realistic scenario of a world spinning into chaos. Moments such as the Garritys farewell to Dale are effective. The sequence where Allison and Nathan go into a looted pharmacy to find insulin and both observe and are caught up in the nightmare of looting and killings is chilling, perhaps more so given both the pandemic and the Antifa/Black Lives Matter lootings and killings.

Greenland wasn't terrible. It wasn't good either, but again I'd go back to the word "serviceable". It isn't something to seek out but neither something to reject.