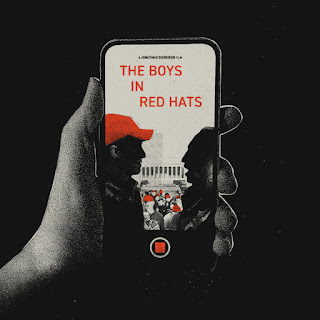 THE BOYS IN RED HATS
When footage of the encounter between Covington Catholic High School student Nick Sandmann and Native American Nathan Phillips first went viral, I personally resisted the temptation to offer any kind of opinion. Long ago have I learned that things are not always as they appear, and that there is another side to the story. That, however, was not what our Twitter mob/instant reaction media did. In a wild rush to judgment, ratings and moral posturing, the Mainstream Press and the social media warriors declared that the Covington students were harassing a poor old Indian, a war hero, exercising their white privilege and wealth to bully someone else. It perfectly captured, it appears, the Fifth Estate's worldview than the truth. The Boys in Red Hats attempts to sort out not so much what happened but why the fallout was as it turned out to be.
Documentary filmmaker Jonathan Schroder, like most people, was first outraged by the bullying, smirking manner of these entitled white boys against old Native Americans. However, things soon started shifting wildly when more footage starting emerging beyond the snippet first circulated. That footage showed a different story: one involving the Black Hebrew Israelites, a group of black people described as a domestic terrorist group. Throw in the fact that not only had it been Phillips who had approached the students versus the other way around, but that Phillips' own past is questionable. Schroder, feeling he'd been duped, decided to reexamine the story.
There's an added element in Schroder's take: he himself is a graduate of "Cov Cath", familiar with the world the students occupy. As such, he started wondering if outside factors were playing a part in how the narrative was being formed, a narrative that is mostly at odds with what he knows of this institution. I say "mostly" because as The Boys in Red Hats goes on, he makes clear his memories of Covington are not rose-colored. With his supervising producer Justin Jones serving as his sounding board, The Boys in Red Hats weaves interviews with those pro-and-con Covington as Schroder aims for interviews with the two central figures: Nick Sandmann and Nathan Phillips. 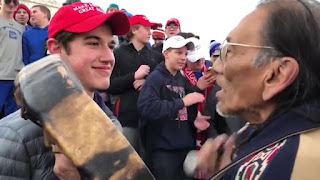 As in all life, things that appear clear can
become different from another perspective. The encounter between Sandmann and Phillips was presented to the public in a certain way, with clear cut heroes and villains. Those Make America Great Again caps were the chef's kiss, symbolizing to some viewers just how evil these kids were. However, in the chaos of the actual incident, where all sorts of things were going on and many pieces were moving hither and yon, it was or should have been impossible to sort things out clearly. The Boys in Red Hats is not a defense of the Covington Catholic students as total innocents nor a damnation of Mr. Phillips. If anything, it is a portrait of how people were quick to decide things that perhaps they did not fully understand.
Schroder uses his insight into the world of "Cov Cath" to attempt a translation about what the students did. The chants they used prior to the encounter was an almost reactive response to things going from one bizarre situation (the harassment by the BHI) to another (Phillips approaching them with a drum). A strong insight about the students' reaction to Phillips comes from Vincent Schilling, a Native American reporter.
He points out that in American society, sports teams fans break out into tomahawk chops. How can we as a society, he says, condemn teenagers for doing tomahawk chops while Phillips beats his drum when adults get if not celebrated at least openly encouraged to do so at Kansas City Chiefs and Atlanta Braves games? In essence, how can we ask for teens to exhibit sensitive behavior when adults don't? 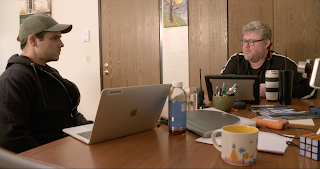 The film weaves various conversations between Schroder and Jones that at times do distract from what is meant to be that examination into the Sandmann/Phillips encounter. As they debate whether and how to try and get sit-down interviews with either of them, Jones seems more willing to push back against Schroder's ideas of whether it is worth the struggle to try. He also is more open about not attempting to explain some odd moments from the overall Covington culture. A particularly cringy moment is when we see the students in what at first appears blackface.
While we may learn that this is part of a "blackout" where they are encouraged to wear all black and paint themselves black, and that there are "whiteouts" and "blue-outs" where the students adopt similar tones, it's still a bit jarring. It's more so when we see at least one or two add other paint in the blackouts that suggest wide grins, elements not added when they are in white or blue.
Context may be everything, but sometimes even in context things look a bit bizarre and tawdry. Jones as the outsider may serve to keep the insider Schroder to not wander into a defense or explanation of the culture that he has been part of.
The interviews are concise and well-spoken, giving us various viewpoints from those defending the kids to those enraged, and still enraged, by the Covington Catholic students. It may not delve greatly into elements others bring up such as "white privilege" why exactly the MAGA hats create such a visceral reaction pro or con; however, on the whole The Boys in Red Hats should be a good primer not so much as to the Smirk Encounter, but in how our own views color what we see.
"I love my bubble", one interview subject tells Schroder off camera. Perhaps it is that love that not only sparked this crisis, but keeps others going in perpetuity.
DECISION: B-
Posted by Rick at 7:20 PM