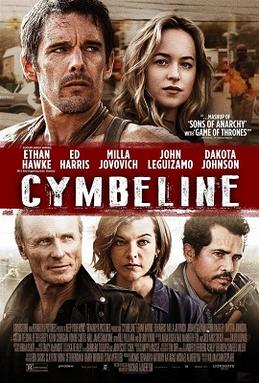 CYMBELINE
I'm always up for a Shakespearean adaptation, especially if it goes beyond the more popular plays. Cymbeline attempts to bring to life a more obscure Shakespeare play with simply disastrous results that are almost astonishing to watch in the wrong way.
Cymbeline (Ed Harris) is leader of the Britons Motorcycle Gang, in an uneasy peace with the Rome Police. His new Queen (Mila Jovovich) has hopes that her son Cloten (Anton Yelchin) marries Cymbeline's daughter, her stepdaughter Imogen (Dakota Johnson) to keep power within the family. She also wants Cymbeline out of the way.
Imogen, however, has eyes only for Posthumus (Penn Bagley), Cymbeline's poor protégé. Their secret marriage forces Posthumus' exile. Here, he wagers that Imogen will remain loyal when Iachimo (Ethan Hawke) wagers otherwise. Iachimo makes both Imogen and Posthumus believe at points that the other has been unfaithful, with only Pisanio (John Leguizamo) loyal to both. Imogen goes to Milford Haven to look for Posthumus, who is convinced Iachimo has successfully seduced Imogen through false evidence.
Now as "Fidel", Imogen finds Belarius (Delroy Lindo) and his sons, with whom "he" has taken refuge. Through a series of tragic events, Cloten is beheaded, "Fidel" is mistaken for dead, and a war erupts between the Bike Club and the corrupt Rome Police, leading to a fiery conclusion and more deaths.

There are three ways to adapt Shakespeare. You can stick with the traditional version, you can update the time and place but keep the language or you can update the plot and move it to another time and place. The Richard Burton/Elizabeth Taylor version of The Taming of the Shrew is a good example of the first, 10 Things I Hate About You is a good example of the third. Cymbeline attempts the second, and while I'm one of the few who does not think Romeo + Juliet is this unimpeachable masterpiece, it is miles ahead of Cymbeline.
The problem, the main problem, the central problem, the dominant problem in Cymbeline is the sheer lack of emotion throughout. The actors appear too focused on reciting the lines than on giving the characters any believability. The vast fault lies with writer/director Michael Almereyda, who apparently directed everyone to speak in near total whispers. Perhaps he was afraid of waking audiences from the inevitable sleep Cymbeline will induce as they slog through it.
Perhaps only once did Cymbeline allow anyone to show anything beyond mere stillness, and even then it was almost sad to watch. Cymbeline is surprisingly miscast and misdirected, where actors with little to no range attempt Shakespeare and actors with great talent are forced to restrain themselves to almost catatonic levels.
Dakota Johnson simply has no range or business attempting to act. Her Imogen was totally blank and acted as though Shakespearean English was untranslatable. Same goes for Penn Bagley, who looks lost attempting to decipher all this. Conversely, Anton Yelchin and Ed Harris are exceptional actors who are forced to show no emotion and just speak the words in a bizarre hushed tone. Jovovich straddles those two worlds, though she is quite beautiful.
As a side note, perhaps because of Jovovich's beauty it seems almost implausible for her to be Yelchin's mother; the fact that there's a mere thirteen year age difference between them making things more odd. 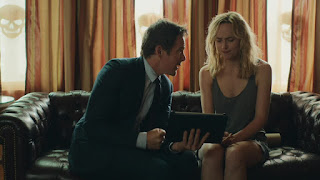 This, to be fair, is how everyone says their lines, making what should be fiercely dramatic moments so unnaturally still and restrained. Everyone is wasted in Cymbeline, even the few who stumble into passable performances that if not for poor directing could have done wonders. Lindo in his too-brief role was better than what ended up on screen. Leguizamo is the best, for he managed to show something of human emotion.
Curiously, he and Hawke are no strangers to contemporary Shakespearean films having starred in Romeo + Juliet and 2000's Hamlet respectively. Leguizamo was much better than Hawke, who was similarly hampered by attempting to match everyone else's hushed, quiet manner. It is bad enough when actors recite Shakespeare versus living out the words. It's worse when they have to speak them so hush-like that it sounds as if they have to whisper.
Cymbeline's one good aspect is David Ludwig's score, which has a pulsating tone that is missing from the film.
I hope that there is a better adaptation to Cymbeline in the future, because while the idea of shifting the story from Celtic Britain to biker America is not without promise, this version failed. One hopes that this Cymbeline soon comes to dust.