The Hound of the Baskervilles (1983): The Television Special 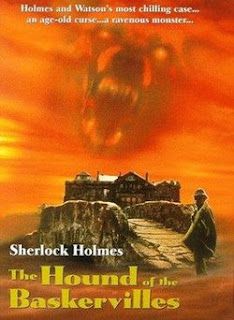 THE HOUND OF THE BASKERVILLES
The Hound of the Baskervilles is one of the best-known Sherlock Holmes stories, its blending of the supernatural with murder making it all but irresistible to audiences. The 1983 television adaptation, while perhaps not as well known as others, is a surprisingly strong version that should be better known.
Dr. Mortimer (Denholm Elliot) comes to celebrated detective Sherlock Holmes (Ian Richardson) for help. Sir Charles Baskerville has died from an apparent heart attack, but Dr. Mortimer suspects that at the very least, Sir Charles' death was connected to an old family legend of a demon hound that haunts the family.
This curse, brought about by a Baskerville ancestor's rape of a farmer's daughter, now may come upon the newest Lord of Baskerville Hall, Sir Charles' American nephew Sir Henry (Martin Shaw). Already there has been an attempt on his life, but who and why would anyone want Sir Henry dead? Holmes sends the loyal Dr. John Watson (Donald Churchill) to the moors to be his eyes and ears.
There are suspects aplenty. Could it be jealous drunk Geoffrey Lyon (Brian Blessed), angered over his abused wife's liaison with Sir Charles? What about the creepy servants Barrymore (Edward Judd) and/or his wife (Eleanor Bron)? Seemingly pleasant neighbors Beryl Stapleton (Glynis Barber) and her brother Jack (Nicholas Clay) may also have motive for murder.
The case comes to a conclusion, one involving fake Gypsies and lost-lost heirs, but also ending in romance and a bright future once the demon hound is brought to heel. 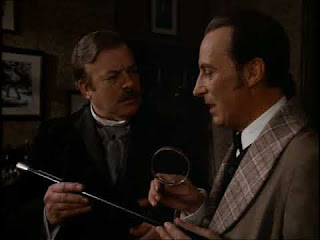 The Hound of the Baskervilles has a very elegant, polished look and feel, a major credit to producer Sy Weintraub. Despite some scenes being studio-bound The Hound of the Baskervilles does capture well the Gothic horror feel of the story. Sometimes the studio nature is hard to ignore, such as when the first attempt on Sir Henry is made on what is meant to be the streets of London. On the whole though, we do get a sense of this Victorian world.
The performances on the whole are also on the whole good. Ian Richardson is not usually thought of in terms of Sherlock Holmes actors, let alone among the great ones. He makes a case for why he should rank higher on lists as he does a great job as the Great Detective. Richardson brings Holmes' arrogance and snobbery but allows him a slight touch of humor. He does, for better or worse, bear a strong resemblance to Peter Cushing where if you look fast you would think it was Cushing as Holmes, but that is a minor point. Richardson in a sense has a dual role, and he manages both well albeit that it soon becomes clear who is who. 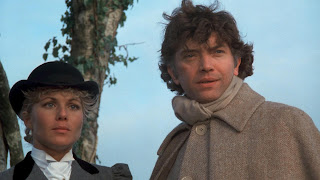 Elliot keeps to a persona of a bumbling, slightly addled figure with his Dr. Mortimer. He was the closest to comedy relief, but he could also be serious when needed. Shaw was a bit blank as Sir Henry, but I put it to the efforts to have him try to speak with an American accent (he was eventually dubbed). Shaw seemed a bit removed from things, but that is a minor point. Perhaps the best performance save for Richardson was Clay, called to play multiple roles and doing each one well.
On the other extreme is Brian Blessed, a man who has built an entire career out of being bombastic to the Nth degree. Here he is simply unrestrained as Lyons, though to be fair his last scene where he tearfully denies committing murder shows he can on occasion tone it down.
As a side note, his story remains unresolved at the end of the film.
With regards to Churchill's Dr. Watson, he sticks with the Nigel Bruce interpretation as a thickheaded blubbering idiot, which is something much to my disliking. Pity that it wasn't until the Guy Ritchie films that the good Doctor had some kind of rehabilitation.
The Hound of the Baskervilles is a well-acted, well-crafted adaptation of the Sir Arthur Conan Doyle novel that hopefully gets more attention. Perhaps a bit too artsy at times (Sir Hugo's rape of the young girl intercut with a drowning horse a bit much) but on the whole I was surprised how good The Hound of the Baskervilles was.
8/10
Posted by Rick at 9:27 AM