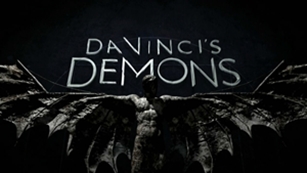 If there is one thing about Da Vinci's Demons that can easily be said, it is that it is not very interested in history. Instead, it is using historic figures to present an alternate history, one that has fact and fantasy blend throughout.

The first season sets up a long thread about the Sons of Mithras, a secret society that tasks Leonardo da Vinci (Tom Riley) to find the mythical Book of Leaves, a hidden source of esoteric knowledge. Da Vinci, an arrogant genius, is more than up to the task. However, he has two issues to contend with.

The first is the machinations of the Vatican, headed by the villainous Pope Sixtus IV (James Faulkner) and his more villainous nephew Riario (Blake Ritson). The second is the machinations of the Medici family, headed up by Lorenzo (Elliot Cowan), whom da Vinci has wormed his way into. Leo has also wormed his way into the bed of Lorenzo's mistress, Lucrezia Donati (Laura Haddock), who happens to be both a Vatican spy and Riario's cousin. 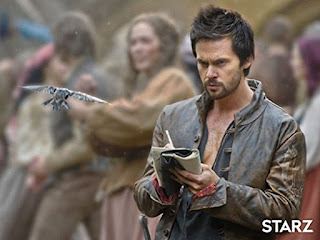 Over the course of eight episodes, Da Vinci's Demons packs a lot of its story within it. I was surprised at how one episode could have so much going on, with only The Devil feeling like a bit of filler. To be fair though, it is hard to have a Dracula vs. Leonardo da Vinci episode without making it sound and play slightly ridiculous.

The sheer lunacy of the various plots and counterplots, blended with magical, mystical elements is what makes Da Vinci's Demons entertaining. It should not be taken completely seriously. Yes, the show wants us to embrace the story and characters, but it also wants us to escape into flights of fantasy.

Major credit should also be given to Ritson's Riario, who almost never shifts from his calm, sotto voce delivery. His habit of speaking softly and menacingly is what makes his crazed, almost unhinged manner in the Season One finale The Lovers all the more shocking. Faulkner too knows how to use his growling voice to great effect as the Unholy Father, and as a side note, the term "naked homicidal Pope" is one I thought I would never write. 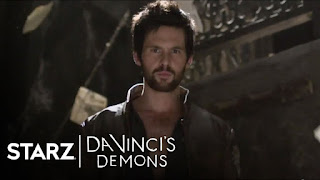 There are two points in Da Vinci's Demons that I do dislike. The first is the graphic nature of the show in sex and violence. As this is Starz, the show has more leeway in what it can show. However, there were times when the gore was far too much for my own tastes. Second, I thought the nudity was more than I thought necessary.

The second was in the exposition dialogue that seemed to plague so many Season One episodes. Too often in my view, dialogue was created to move the plot forward, attempting to explain things rather than let the situation and action do that. Again and again we had characters tell us what was going on versus showing us.

I think the latter is not as important as the former in my enjoyment of Da Vinci's Demons. There was particularly in the violence a more graphic tone that I like and am comfortable with. However, I figured this was going to happen here, so I did not go in with eyes fully closed. On the whole, I think Season One of Da Vinci's Demons will appeal to those who like fantasy and history blended.

With a little sex in it, or in this case, a lot of sex in it.

Season Two Episode One: The Blood of Man