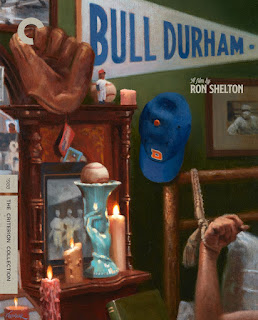 As per tradition I now review a baseball-themed/related film to coincide with the Minor League Opening Day in El Paso. This year's film is a romantic comedy that blends love both romantic and athletic.

There are two kinds of players in the Minor League system. There are the young, hungry men biding their time until they are called up to "The Show" (aka the Major Leagues). Then there are the older but still hungry men who either have made it to the Majors or are for whatever reason still falling short and starting to see their chances slip away. Bull Durham takes us into this world, one where matters of the heart metaphorically and sometimes literally collide with fastballs.

Annie Savoy (Susan Sarandon) is a baseball groupie, taking on one player from the Durham Bulls minor league team as her lover for the season. She calls it her own personal spring training. This season, she finds two prospects.

There's Ebby Calvin LaLoosh (Tim Robbins), a pitcher with what is described as "a million-dollar arm and a five-cent brain". Then there is LaLoosh's polar opposite: Crash Davis (Kevin Costner), a veteran catcher who has skimmed the edge of the The Show but for twenty-one glorious days has never entered this rarefied world. He has been brought in to help LaLoosh control his wild pitching style to get him to The Show. Annie and Crash do their own versions of training Ebby, now nicknamed "Nuke", but while Annie continues her affair with Nuke, she is also fighting an attraction to Crash.

She, devoted to baseball, knows that Crash is close to having the record for most home runs in the minor leagues. Crash, however, sees nothing great in what he considers a dubious record. Crash helps Nuke get to The Show, but with his purpose gone, Crash now finds himself out. Annie and Crash find that perhaps getting a grand slam is possible with each other as Nuke enters the literal big leagues. 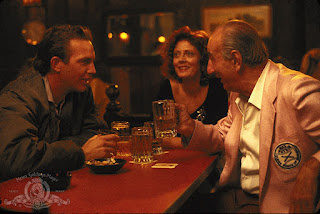 Bull Durham is many films all in one. It is a comedy, a romance, a drama and a sports film. A fan of all these genres will find something to enjoy in the film, and writer/director Ron Shelton blends them perfectly. It is a credit to Shelton's writing and directing that Annie's voiceover works, never explaining the story but instead giving her viewpoint and hers alone.

Many films, sadly, use voiceover to move the plot forward. Bull Durham, conversely, uses voiceover merely to give one character's perspective without diminishing the Crash/Nuke story.

Bull Durham has three exceptional performances. Robbins is spot-on as the dimwitted Nuke, vapid and vain who thinks owning a Porshe and having sex is what makes him successful. A man so unaware of things that he refers to Edith Piaf that Annie listens to as "that crazy Mexican lady", Robbins excels at the arrogant but eventually somewhat more aware Nuke.

Costner is by no means playing a "grizzled veteran", especially given he was only 33 when Bull Durham was released. He instead plays a still-young, eager man aware of life and aware whatever hope he has to get back to the Majors is fast slipping. Near the end of the film he yells at Nuke, "I got brains, but you got talent," acknowledging his fate to be wise but to not have everything to move up.

He has a weariness in his performance mixed with a sharp intelligence and a still strong sexual drive. Crash does not want sex without love, wryly telling Annie that he has been around too long to try out for it. Costner has incredible delivery in his dialogue, making Sherman's script sound authentic and natural. 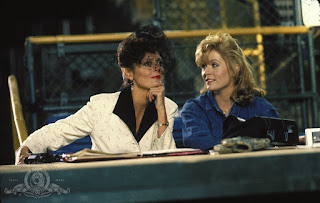 It might be cliche to say that Sarandon is "sensual" and "flirtatious" as Annie, but she does showcase a pretty sexually charged character. However, along with Annie's brazen manner, Sarandon also shows quite a bit of humor, even naivete as Annie. Her attempts to seduce Nuke away from his abstinence by propping up her leg at him is hilarious. Every time she remarks on something with "Oh my" showcases a woman who can still be surprised, who might not be as sophisticated and worldly as she thinks she is.

Sarandon's Annie is also a woman of culture, able to quote William Blake. Annie, perhaps curiously, is also a baseball devotee, able to find the weakness in a player's form both athletically and physically. What can one say about a woman who reads Walt Whitman as foreplay? That she knows a man will endure something he finds tedious in the hopes of a tryst shows Annie is aware of how men think, but in her own way, Annie is sweet, a mentor to younger players and just as vulnerable to love as those she plays with. 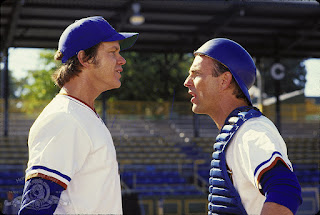 Bull Durham allows for smaller moments and baseball eccentricities, such as players' various superstitions or that mix of anticipation and frustration about their careers to come through. It is well-supported by smaller roles such as Trey Wilson's much-harried team manager who gives the simple advice about how to play baseball.

Bull Durham is a great love story of two people who know a good thing when they see it, even if sometimes their own views collide with how to handle a talented but dumb prospect. It is also a love letter to minor league baseball: the long road trips, the smaller crowds, the events to draw local audiences in. These players, who dream of getting to The Show, keep grinding away, with only that dream of moving up keeping them just at the edge of the majors.

See it as a romance, a comedy, a romantic comedy, a wise sports film or a drama of dreams fulfilled and unfulfilled. Bull Durham keeps them all balanced, with strong performances and a firm understanding of that lesser-known world of Minor League Baseball. It is a Show unto Itself, and Bull Durham is a delight from start to finish.