Fear Strikes Out: A Review

To celebrate Opening Day, I've started a new tradition: a review of a baseball-related movie.  This year, we're looking at Fear Strikes Out, the biopic of Boston Red Sox Jim Piersall.  Fear Strikes Out can sometimes slip into a bit of a farce, but it mostly stays level thanks to two strong performances.

For as long as he has been alive, Jimmy Piersall (Anthony Perkins) has wanted to play baseball.  At least, that's the perceived idea.  In reality, Jimmy is pretty much pushed and cajoled by his father, John (Karl Malden), a man who had Major League aspirations of his own but never found a chance to try to get into the Majors.

Very quickly he is able to get into the Red Sox's minor league team, but John is adamant: he has to be in the minors one year, otherwise his career is over.  Sadly, Jim is in the minors two years, with his disappointed and disapproving father bearing down.

"There's fifteen games to go and I'm batting third in the league," Jim tells his father when he comes up to see Jim in his first year.
"Well, that isn't first," is John's reply.

The only bright spot in Jim's life is Mary (Norma Moore), a nurse he met at spring training whom he quickly falls in love with.  Impulsively they get married even if his career is not the greatest, but unexpected news arrive: the Red Sox want him on the team, but as an infielder.  Jim, who has played in the outfield all his career, simply does not know if he can change and soon starts showing signs of a mental breakdown.

That break finally comes one game after scoring a home run.  Rather than be happy that he hit a home run in the majors, he comes completely undone, trying to jump over the safety net and even threatening his fellow Red Sox with a bat until police subdue him.

It's off to the loony bin for Jim Piersall, with his career all but dead.  It takes the kind and patient Dr. Brown (Adam Williams) to slowly help Jim return from his mental collapse, using baseball as a way to reach the nearly catatonic Piersall.  It also means that Papa John has to stay away from his son, for his unrelenting pressure has been at the core of Jim's mental health issues.

Finally, Jim is able to slowly come back, and Fear Strikes Out ends with him about to return to Fenway Park, to return to the game he loves.

I would say that the best performance in Fear Strikes Out isn't from Perkins, whom I'll get to later.  Instead, the best performance comes from Malden as the unintentionally cruel father.  Malden makes John's casual way of insulting, belittling and demeaning his son at every turn so natural.

There's the aforementioned 'Well it's not first' line, which he delivers not as a rebuke or in scorn but as a calm statement of fact.  He makes it sound if not quite jolly, at least not overtly cruel.

There are a few moments when Malden does come across as cruel or uncaring, but for most of Fear Strikes Out, he comes across as more clueless: the stage father unaware that his advice/encouragement/fact-stating is actually nothing more than bullying dressed up as either kindness or honesty.

That's what makes Jim's final rejection of his father more powerful than if John had just been an ass to be an ass.  John had sneaked into Jim's hospital room to 'reach' Jim, so the shocked look on John's face when Jim orders him to go makes the scene more impactful.  That's no surprise given that though Ted Berkman and Raphael Blau's adaptation of Piersall's memoir, John uses 'we' a great deal when discussing his son's career.

Perkins is someone who will forever be haunted by one role, brilliant though it was.  In Fear Strikes Out, even though it was made four years before his most legendary role, we can see little shades of the future in his performance.  Of particular note is his 'mad scene', when he goes bonkers on the baseball field.  His physicality at being so unhinged could be a mirror image of when he is restrained in that other movie. 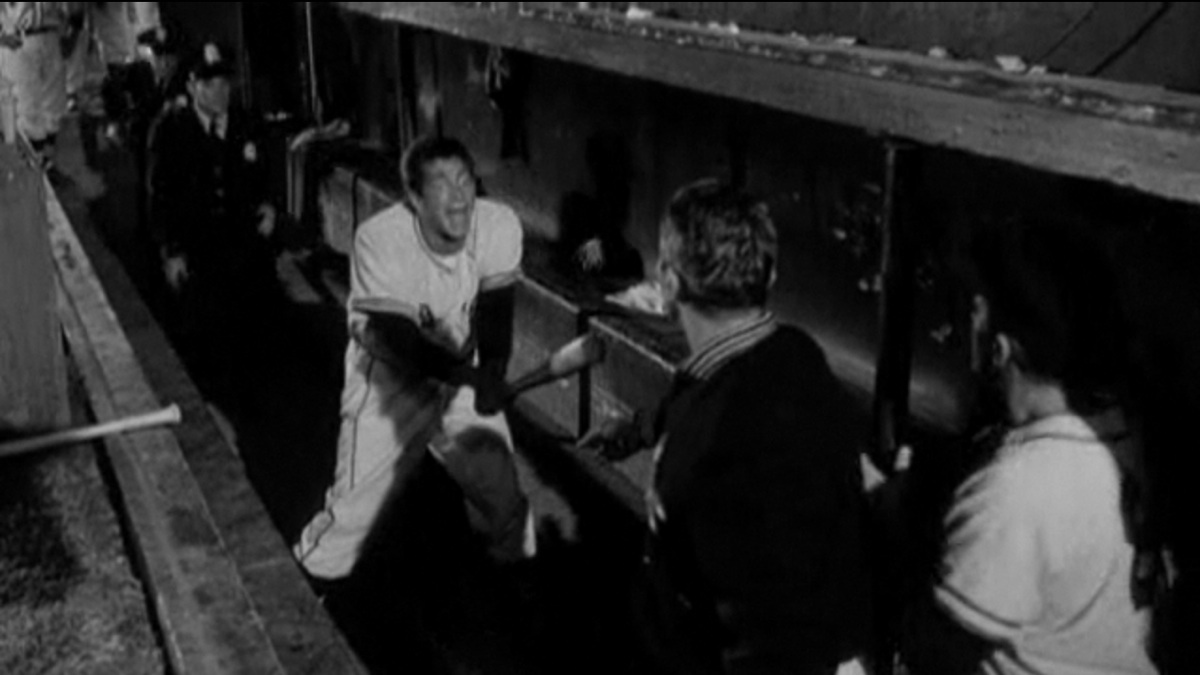 At times though, Perkins came across as less mentally troubled and more morose.  When a despondent Mary comes to see him, Jim looks more angry than confused.  When trying to bring more drama in his final confrontation with his father, it was a bit more dramatic than perhaps it should have been.  Moore was appropriately supportive as Mary.

Elmer Bernstein's score is curious: at the beginning it seems so overdone but at other points it is well-crafted.  Sometimes the music makes the scene more than the performances: in turns ominous, optimistic, even a bit bonkers, sometimes in the same scene (such as when Jimmy attempts a phantom version of being an infielder, making him look a bit crazed before his total meltdown.

On the whole, however, Fear Strikes Out is an interesting journey into one man's mental breakdown due to the pressures from his overbearing father.  You sometimes wonder about the baseball game (the film has the Red Sox always playing against the Chicago Cubs), but with good performances from Perkins and especially Karl Malden, it is worth a watch.