With Bates Motel over, I thought it would be nice to look over the history of the Psycho phenomenon, and what better way to begin than with the original.  Shocking when it was released, and still shocking today, it is interesting that while many people might think that Psycho began the glut of graphically violent films, the movie itself is actually quite restrained when it comes to what is actually there.

History has proven that Psycho was not a cheap slasher film (let alone the genesis of the genre), but among the best-crafted films of the 20th Century.

Marion Crane (Janet Leigh) is a good and honest person, though her love life is a bit chaotic.  Her lover, Sam Loomis (John Gavin), has many debts and an ex-wife, which is why he won't marry her.  Marion wants to help Sam and find a way to be together, willing even to move from her home in Phoenix to his small hardware store in Fairvale, California.

Things take an unexpected turn when $40,000 almost literally falls in her lap, a cash payment by a wealthy real estate client.  Her boss is uncomfortable with so much cash at the office and asks Marion to deposit it in the bank.  Marion decides to make a run for it.

Her nerves get the better of her, as she finds herself quietly pursued by a police officer who finds her very suspicious, more so when she trades in her car for another.  Eventually, she drives to the Bates Motel, having accidentally gotten off the highway.  She seeks shelter from the storm, and the hotel owner, Norman Bates (Anthony Perkins) offers both shelter and a good ear.  He also has a mother, who constantly shouts at him but who is, in his own words, incapacitated.

Marion then decides to clean up her act, deciding in her own mind to go back and face the music.  She also decides to take a shower, and it's here where all hell breaks loose.

Marion Crane is stabbed to death in the shower.

Shortly afterwards, Marion's sister Lila (Vera Miles) goes to Sam's to find her, but Sam doesn't know anything.  Unbeknown to either, there's someone else looking for Marion: private detective Milton Arbogast (Martin Balsam).  He wants to know what happened to Marion, and the $40,000.  His investigative work leads him to the Bates Motel, where he finds a very nervous Norman.  He also finds that Norman will not let him see Mrs. Bates.

When Arbogast doesn't contact Lila and Sam, they decide to investigate themselves.  This leads to the shocking discovery of the truth of Norman and Mrs. Bates, as well as a long explanation by a psychiatrist (Simon Oakland).  The truth about Marion's murder and Norman Bates leaves everyone in disbelief. 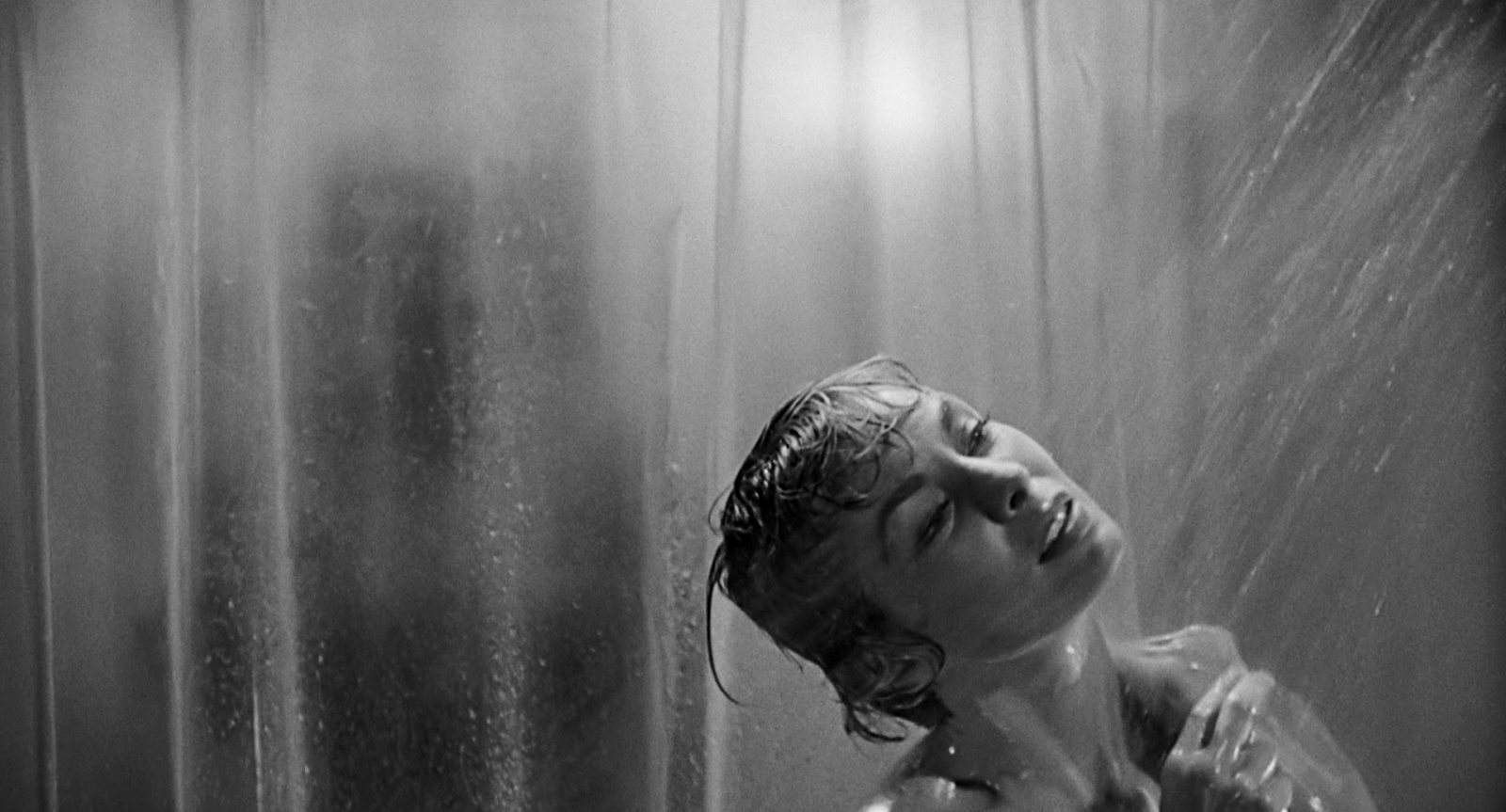 Psycho has become a byword for 'crazy', but the film is anything but.  It still is shocking in so many ways.  First, screenwriter Joseph Stefano (adapting Robert Bloch's novel) and Hitchcock give us a major twist in killing off what the audience believes to be the main character.  The film has you believe that this will be Marion's story, but about halfway through the film, we see her slashed to death.  Having our 'main' character killed off, particularly in that manner, upends audiences' expectations, leaving them off-kilter and unsure of what will happen.

It's not a spoiler to say that Marion Crane was murdered: the shower scene having become iconic.  Those who have not seen Psycho are aware of it: it's been reference and parodied countless times.  What might be surprising to people is that the shower scene is both very brief (probably under two minutes at the most) and surprisingly not violent.

The shower scene has been analyzed and studied and dissected in many film classes, and I don't think I need to go over every frame of it.  Instead, I can tell you what I saw, and this is something that has been commented on by others.  The shock and horror that comes from it is not directly related to what is actually shown (there was probably one very quick shot of the knife near the body, but from my perspective it didn't look like it had actually entered the body).

The shock and horror comes from the impressions it leaves.  Everything in the shower scene works to give an illusion of rapid, out-of-control, frenzied violence on an almost unimaginable scale.

Bernard Herrmann's score at this scene have a stabbing-like sound: the violin strings repeating the same note in short, rapid succession, with a controlled frenzy backing it up.
George Tomasini's quick cutting where things again show a frenzy and fury, the knife appearing to come almost closer and closer to us as it 'cuts' through the water.
Janet Leigh's screams of terror as she desperately fights off her attacker.
Hitchcock putting all this together seamlessly.

We even get a touch of pathos after her killing.  Accidentally or not, a couple of the shower water drops almost appear to form 'tears' from Marion's eyes, as if metaphorically she is crying that now she will never get a chance to redeem herself when she had made the decision to return to Phoenix and try to make right what she did wrong.

It adds a touch of sadness after the perceived violence, for if one looks at the shower scene, we see that the blood and gruesome nature of it comes from our imagination, not what is literally on screen.

Psycho's brilliance also comes from the non-verbal cues the film gives us.  Herrmann's score is among the greatest for film (shockingly overlooked come Oscar time, which didn't even bother nominating it), but the use of silences in Psycho is also quite incredible.  Hitchcock allows us to fill in information without having to tell us.  When Marion decides to run off with the money, we not only see how she's gone from light to dark (in her romp with Sam, she wears white underwear, when planning to leave, it becomes black), but see the camera shift from her, to the envelope with the money, to a suitcase.

In those three movements, we know all there is to know.

Again and again Hitchcock shows us rather than tells us things to give us the subtext: the constant mentions of marriage to Marion (whose one desire is to marry Sam), the stuffed birds looking over Norman (a bird of prey seeking out its hunt), even the name Crane.  The subtlety of Psycho is something that perhaps should be more noted.

Even when dialogue is used, sometimes it can be to dark humor's use.  After Marion is killed, Lila comes to Sam's, wanting to help her sister before, in her words, "she gets in this too deeply," an unintentionally gruesome comment given how just earlier we saw Marion's body sink into a swamp when Norman pushed her car into it.

Janet Leigh was nominated for Best Supporting Actress, and it was well-earned.  Her Marion was sympathetic, and often she had to act with voices going through her head.  Leigh had to express emotions with her eyes and face, and she did it beautifully.

In his short turn as the detective, Balsam is also extraordinary: sharp, shrewd, determined.

Anthony Perkins became forever typecast as a troubled, mentally unstable man after Psycho (so much so that despite working on other films, he found his best work recreating the character in three sequels).  Despite the trouble Psycho would bring to his career, Perkins' performance is iconic and brilliant.  His hesitancy, his nervousness coupled with what appears his sincerity and kindness makes Norman Bates a figure of sympathy and revulsion.

The great flaw in Psycho to many is the psychiatrist's long and ponderous wrapping up, as if the audience needed some rationalization for the insanity of the past two hours.  I never found it a dealbreaker but I can see why so many found it rather much, even in 1960.  A minor flaw might be in some shots that make it a bit dated, but the technology just wasn't there to make it as effective as it might have been today.  Still, minor points.

Psycho still, after a half-century plus, still can shock us again and again.  Exceptionally acted, extraordinarily directed, with an iconic musical score, the film remains a high mark in cinema history.

It's a tough act to follow, let alone duplicate.  However, that's for another time.