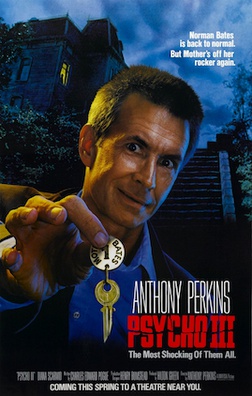 Anthony Perkins not only acts but directs Psycho III, which tries to make our most genial nutcase more wholesome (or as wholesome as he's allowed to be).   At least until Psycho III decides it was going to be a genuine slasher film.  I admit to enjoying the film, finding the homages to other Hitchcock films and some subtext almost amusing.  However, it was a bit too gory then, and too 80s now, to be up to either the original Psycho or the sequel.

Picking up a month from the events in Psycho II (even if there are three years between the films), Psycho III involves Norman Bates (Perkins) still seeing and hearing his dead mother, though as to who is his actual mother is a subject of debate. He killed Emma Spool, who in the last film claimed to be his real mother.  Her disappearance is a catalyst for some of the story.

Into his life enter three people whose stories collide.  There's Maureen Coyle (Diana Scarwid), an ex-nun whose crisis of faith led to the accidental death of a nun. Already suffering emotionally, her guilt only compounds her emotional agony.  She hitchhikes with Duane Duke or just plain Duke (Jeff Fahey), a charmer who has dreams of making it big in rock n' roll.  Finally, there's Tracy Venable (Roberta Maxwell), a crusading journalist who wants to get the story about how Norman, a formerly criminally insane figure restored to sanity and society, sees the issue of allowing people like him out.

Norman, whose sanity is thinly disguised, is alarmed by the appearance of both Venable and Maureen.  Maureen has a similarity to one of his victims, Marion Crane, down to her initials. He struggles with Maureen's appearance at the Bates Motel, and is unaware that Duke, whom he hired as a part-time Assistant Manager, attempted to have his way with her.  Maureen, distraught and confused about things, attempts suicide by slashing her wrists in the bathtub.  In her haze and confusion, she sees, not Norman dressed up as his Mother, but the Virgin Mary, confusing Mother Bates' butcher knife for a crucifix.

Norman saves her life and rushes her to the hospital, and Venable's curiosity is aroused.  She suspects that Norman is behind Mrs. Spool's disappearance, and after Duke fails to pick her up, gets him to work as a spy. Duke did manage to pick someone up, but after their one-night stand unceremoniously kicks her out.  Poor choice, as she's killed: stabbed repeatedly in the phone booth.

By now Maureen and Norman have bonded, though both struggle with desires of the flesh.  The Bates Motel is inundated with guests for a Homecoming game, and a pretty guest is murdered there too.  By now, Venable is convinced Norman is up to his old tricks again, and pushes to investigate further, especially after finding the Bates Motel number in her apartment.  As there are no bodies to be found, the Sheriff (Hugh Gillin), can do nothing. The Sheriff is actually fond of Norman, thinking he is innocent but unfairly hounded.

As Norman continues to struggle with his mind, he pushes Maureen away.  He also finds that "Mother" is missing.  Duke has discovered Norman's biggest secret and puts the squeeze on Norman for a lot of money in exchange for his silence.  Norman, as Norman, kills Duke, but not without a fierce struggle.  Maureen returns to Norman, and is accidentally killed.  Norman, finding his last chance of love gone, rages against Mother, but now has devolved into her.

Venable, for her part, has been digging into the past and makes a shocking discovery about Norman and Mrs. Spool.  She rushes to the Bates Motel and makes another shocking discovery: Maureen dead.  Patsy makes yet another shocking discovery: Norman Bates in full drag, and he/she goes after her.  Patsy, too dumb to flee, screams out the truth: Mrs. Spool was Norman's aunt, not his real mother.  She had murdered Norman's father in a jealous rage, having been in love with him but he not returning the affections.  Emma had then abducted Norman and convinced herself he was her child.  It didn't take long to find them, and Emma Spool was institutionalized while Norman was returned to Norma.

Norman, now bonkers beyond hope, starts slashing Mrs. Spool's corpse.  He is taken away, declaring that he's 'finally free'.  Or is he, for while he's driven away to the institution, he cradle's Mrs. Spool's severed hand, smiling... Perkins had studied films enough to give shout-outs or rip off other Hitchcock films, depending on your point of view.  The opening is a direct call-out to Vertigo with its bell tower and falling corpses, and Maureen's death is almost a shot-for-shot copy of another character's death in the original Psycho.

The killing of Red, Duke's one-night stand, is similarly deliberately reminiscent of Psycho, and while the shock of Marion's murder still takes audiences off guard, here, we kind of were waiting for it.  I think that even if you hadn't seen either Psycho or Psycho II you would think she wasn't long for this world.

He also, thanks to Charles Edward Pogue's screenplay, has some fun with symbolism and a touch of humorous in the macabre.  For example, Maureen's death involves a literal Cupid's arrow: her love literally killing her.  Norman casually kills small birds by enticing them into his birdfeeder, then cheerfully stuffs them while munching on cookies, giving it a creepy, ghoulish overtone.  Perkins' line readings also deliberately lend themselves to an off-kilter interpretation,

When he hires Duke, he tells him that Duke will take the day shift.  "I prefer the nights", Norman tells him in a way that even the somewhat dimwitted Duke would take notice of.

In a certain way, Psycho III allows itself to have some fun with its premise, the dark humor coming from certain moments (such as when the Sheriff unwittingly takes some ice cubes with blood on them and sucks on them, Norman having stuffed a victim's body into the ice chest at the motel.

However, where Psycho III does get a little off is in the graphic nature of the violence.  Like a lot of actors-turned-directors, Perkins loves calling attention to how a film looks, and Psycho III does have some well-crafted visual moments.   However, when some people are killed, the graphic nature of the violence is surprisingly gruesome almost sadistic.  This is particularly true with both the girl killed on the toilet and Maureen's death.

It seems to be more in line with the Friday the 13th/Nightmare on Elm Street type of teen-geared slasher films than a well-crafted Hitchcock film.  At times it almost plays like parody (not that the romp between Duke and Red didn't have its moments of unintentional humor).  At least when Duke is killed, the humor was intentional (as Norman picks up the guitar to smash his head in with it, Duke's final words are what he's said twice before, "Watch the guitar").

Some of the performances were good, some not.  The best was Maxwell as Venable, who minus her idiotic race up to the Bates house (or never using the tire iron she had for protection), came across as a determined figure.  Fahey was surprisingly good as the lecherous Duke, who uses his looks to his advantages but who is sleazy at heart.  Scarwid was a bit over-the-top at times (particularly when she was a novice nun), but at others she can be more grounded.  It's Perkins who at times is too obviously off, with his hesitancy and manner almost signaling "I'M NUTS!"

Psycho III is also humorously dated: Norman offers Duke the job for "$5 an hour", and the rate for a single room is $25.95, two things that would be laughable today.  Again, so 80s.

Psycho III is a bit too graphic, derivative of other slasher films of the time.  Still, it is an entertaining film for those who like Norman Bates and one last, somewhat morbid somewhat macabre somewhat humorous last turn to our favorite Mama's Boy.