The Saratov Approach: A Review (Review #915) 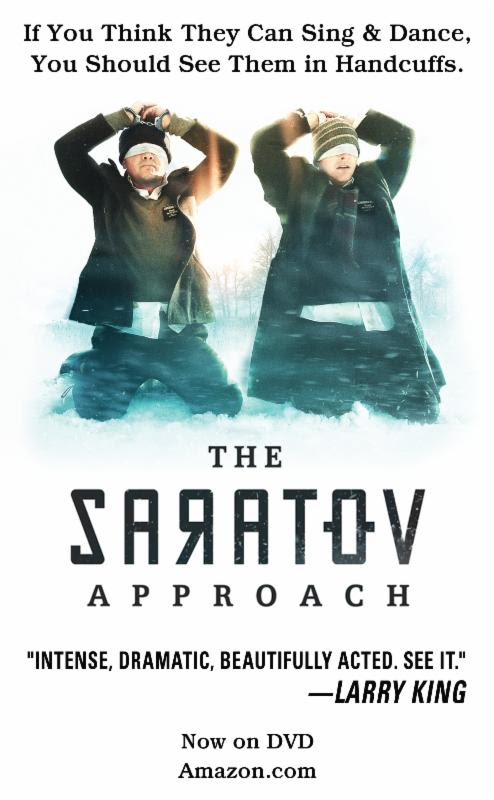 When it comes to The Saratov Approach (in my mind, a clunky title since I'm not sure exactly what the 'approach' refers to, though I have my ideas), two things stick to my mind.

The first is that it is based on a true story, so it isn't hard to respond emotionally to the story.

The second is that behind it, there is a bit of proselyting behind it, and for better or worse it can be used as a tool to promote the Latter-Day Saints (aka Mormons).  These two elements combine, don't necessarily clash, but still tug at my mind after watching.

Elders Propst (Maclain Nelson) and Tuttle (Corbin Allred) are LDS missionaries in Russia (I should note that for the most part, members of the Church of Jesus Christ of Latter-Day Saints dislike the term 'Mormon', so I'll try to be respectful of their beliefs but will on occasion refer to them as Mormon).  They are surprised when Nikolai (Nikita Bogolybov) asks them to come to his apartment to hear the message.

Propst and Tuttle go on the appointed day, accidentally forgetting the Book of Mormon.  Propst suggests coming back another day, but Tuttle insists on pushing on.  Poor choice: as Nikolai and another man, Sergei (Alex Veadov) brutally beat them and hold them for ransom, believing that as 'rich Western Christians' they will get them a nice bounty.

To their surprise, neither the U.S. government, the LDS Church in Salt Lake, or the Tuttle and Propst families are going to pay the ransom (though the families would do it in a heartbeat if it got them their sons back).  The government and Church do what they can, but their hands are as tied as the two Elders.

Tuttle is a crying wreck, but Propst thinks that Nikolai might be the key to help them escape.  He begins a charm offensive with Nikolai, which pays dividends: he moves the Elders to more comfortable settings, feeds them and gives them drinks (juice of course, the Elders turning down offers for beer, coffee and tea).  Sergei is displeased that no ransom will be paid, but the Elders continue to hold onto their faith, and in the dramatic week reveal things about themselves as they have never had a particularly close relationship, having differing views on how to reach the Gentiles.

Eventually, Propst and Tuttle come to believe they are in God's hands and that their Heavenly Father has a plan for them.  Despite having a chance to escape, they opt not to, and just before Sergei takes them out, with a fearful Nikolai helplessly watching, he has a sudden change of heart and leaves.  Propst had marked his hand with the same tattoo Sergei has: one that Sergei got in the Russian Navy in honor of a fallen comrade saying "Forever Loyal".

The Elders safe, they decline the Church's offer to end their Service early and go to another undisclosed European city, returning to testify against their captures.  Sergei gets four years in prison, Nikolai two years probation.

It is difficult if not impossible to divorce the action and spiritual aspects of The Saratov Approach, true story or not.  It is almost as if the horrible circumstances our two Elders are in were used to show the strength of their Mormon faith.  I'm not dismissing that their faith did help them endure this horrifying ordeal, but at the same time there was something vaguely propagandistic about it all.  It was as if I can imagine having Elders come to my house and offer The Saratov Approach to show how Mormonism gave them the hope in their Heavenly Father and thus, I should really consider the truth of the LDS Church.

This is what brings some division to me with regards to the film.  On a technical level The Saratov Approach, though limited with a small budget, is on the whole a good film.  As portrayed by Allred and Nelson the Elders were not painted as saints but as people with flaws, with fears (especially Allred's Tuttle, who came across as almost perpetually fearful versus the more muscular, masculine, macho Propst).  We can put aside the fact that they both look to be in their 30s and thus a decade too old to be actual Elders (Allred was 34 when The Saratov Approach was made, but I could find no age for Nelson but figure he was similarly in his 30s).

Nelson was the de facto lead as Propst was the Elder who seemed to keep his head and be in charge (down to drawing the tattoo as a subliminal way to reach out to Sergei).  That doesn't take away from Allred, who gave a strong performance, particularly when he has a monologue about how he changed his decision about serving on a mission.  It was a quiet moment, but well-acted. Writer/director Garrett Batty even allowed for moments of levity, as when the Elders distract themselves from their situation by discussing the merits of the Utah Jazz versus the Chicago Bulls.  We also get a couple of flashbacks to their time in Russia, which allows us a brief respite from the ordeal and a chance to see how they differ in reaching out to people.  A final flashback by Propst on his whole life and how it might have led to this moment of trusting in the Heavenly Father is beautifully filmed.

If there was an issue with things, it might be those flashbacks and a dream sequence, which at times felt long and which didn't quite work out because we already could figure it was a dream sequence and undercut some tension (though to be fair, it was effective and frightening).

As a non-Mormon, one who knows that their declaration of being Christian is a subject of debate among my evangelical brothers and sisters, I am still slightly wary with regards to the idea that The Saratov Approach is just a movie with no desire to promote Mormonism whatsoever.  It isn't straight-up propaganda like Meet the Mormons was since it was based on a true story.  It had good performances, some effective moments of tension, and a positive message.  Even the low budget didn't get in the way.

I can't fault a film for being good, though again I'm still a bit hesitant to not think that films like these and Freetown (another 'Mormon Elders in Danger' film) have a dual purpose to those of us not in the Mormon faith.  It seems Mormon cinema is built around a lot of films revolving around Elders, be it "Mormon Elders in Danger" movies like Freetown or The Saratov Approach, or comedies ranging from the goofy The R.M. to the more serious but still light The Best Two Years.  Yet I digress.

Ultimately, I'd recommend The Saratov Approach for its performances and its story of fear versus faith, but with a slightly jaundiced eye towards the proceedings, suspicious that its true-life story serves more than one purpose.